Thor the Dark World was better than the first Thor film. The characters and world are already established so there's more depth to the story and we get to see bits of the nine realms we didn't get to see before. There are various good character moments and interesting use of the science/magic/alien tech that was introduced but not much explored in the first installment. Thor has developed, he's grown more thoughtful, plus he's less of a fish out of water on Earth. Odin seems pretty much the same, which is kind of a problem. Jane Foster and Darcy seem to be pretty much the same characters, which is no bad thing, especially with Darcy. Jane and Thor's relationship develops, but in pretty much expected ways. Loki is imprisoned for his crimes, but then his unique skills are needed by Thor. Dr Eric Selvig went crazy in the aftermath of the Avengers, but that's no surprise and his sciencing is still important. Also there are dark elves and their leader wants to turn the universe to darkness.

There are two end credit scenes. One halfway through and one at the very end. I personally felt one was better than the other. 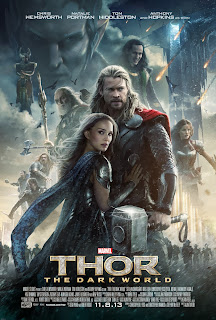 Beware, there are spoilers below.

There are some new characters, in the slightly hapless blokes that Jane and Darcy encounter. Ian and Richard are clearly there for comedy purposes, but that works well enough and means that Chris O'Dowd is in a couple of scenes, which is no bad thing. We also see a lot more of Frigga, Thor and Loki's mother, who turns out to be kinda awesome, so its sad that she's killed before we get to see much of what she can do. It is clear that a lot of the illusions and stuff Loki does are things he learned from her, rather than anything to do with being born a frost giant (in fact the whole frost giant thing is never really touched on, it's more about the fact he's adopted).

It's easy to forget how menacing Christopher Eccleston can be, he does a good line in scary bad guys. Of course as Malekith, ruler of the Dark Elves, he looks pretty creepy to begin with and Eccleston's presence backing it up. The premise is that Dark Elves were around before light came to the universe and want things back the way they were, it means there doesn't have to be any character development as far as the villain is concerned (I was reminded of Eccleston playing the Dark Rider in The Dark is Rising - a bad film in which he plays a character with basically the same motivation, but no reason for it). This isn't a bad thing as there's plenty of character development in just about every other part of the film, and of course Loki's position is complicated by not being the antagonist, but not being trusted by the protagonists either.

Loki is less the evil, murdering bastard of the Avengers and more the moody, untrustworthy trickster he started as. What became clear to me is that despite of the lack of genetic link Loki is very much Odin's son, I'm fairly convinced Odin used to be a right bastard, and his gruff, disapproving way with his sons is a real problem. There's tensions between Odin and Thor because Odin, despite his earlier speech to Loki about humanity, is entirely dismissive of Jane Foster as a partner for an Asgardian prince. I reckon Odin might as well allow Thor to have some fun with his human woman, I mean she'll be dead before century passes, but Odin just doesn't want anyone deviating from what he wants. Loki might try to distance himself from his adopted father, but even he points out that he hasn't really done much that Odin wouldn't do, which is fitting given the twist at the end. That is something they will have to explore more in later films.

I liked the scenes in London, partly because (like in Skyfall) the city wasn't glamorised, it had grotty bits and the weather also seemed realistic. I liked the weird gravity/spatial anomalies and how people played with them. That was also something I liked a lot about the big fight at the end. The gravity distortions and random portals had a real impact on the action and were used in ways that made sense and were also comedic. The film balanced its serious bits quite well with the mostly lighthearted tone.

The first end credit scene is clearly a nod to the wider Marvel film plan, and also made Marvel boy (my husband) squeak with excitement as the macguffin of this film is sent to a really dodgy-looking bloke to be guarded - Asgardians lack healthy suspicion it seems. The second shows Thor and Jane properly reunited.

Overall it's a good continuation of the Thor franchise and fits nicely into the overall Marvel film universe.
Posted by Catherine Hill at 11:04