Geordi ignores his staff and spends time with a pretty holodeck lady when he should be working.

Geordi is on a date with a woman who doesn't seem that into him, despite his aura of awkward enthusiasm, moves that were old 300+ years ago, and a holo-gypsy violinist. Wesley sees that Geordi's date didn't go well. Geordi asks Guinan for advice about women, but doesn't really listen to what she's saying.
A distress signal leads to a 1000 year-old space battle. Picard wants to look at an old cruiser and leads an away team to poke about. On their return the Enterprise has power problems and can't move away. They are caught in a thousand year old trap, the power draining away while the ship is bombarded by dangerous radiation. The shields will only hold for so long, Crusher prepares to treat people for radiation sickness and Geordi tries to fix the problem. Riker takes an away team to the old cruiser to see if there's any information there. 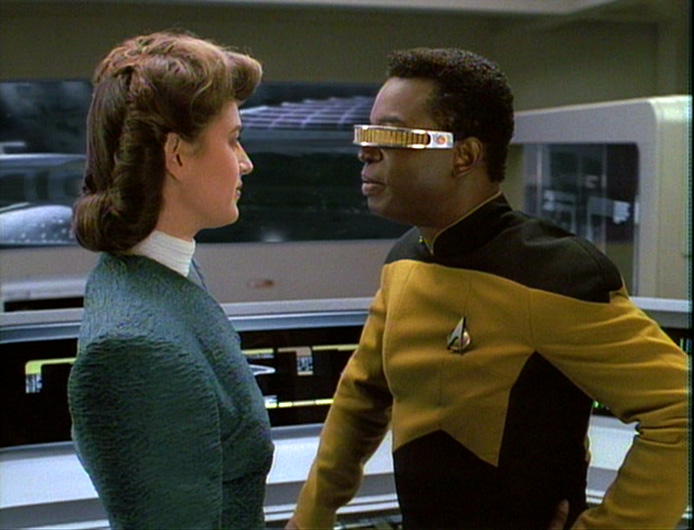 Geordi researches, and finds useful notes by Dr L. Brahms, who designed the Enterprise's propulsion system. Unable to visualise the problem in Engineering he instructs the Computer to create a holodeck simulation based on the notes. He's surprised to find a simulation of Dr Leah Brahms herself (he still doesn't get how the holodeck works), he's also distracted because she's pretty. He tries to discuss the situation with her, but she's a facsimile and responds mechanically. Geordi gets the Computer to create a version of her personality, and he's further distracted by how friendly, informal and smart about engines she is.
The away team retrieve information from the cruiser. The radiation is powered by the energy being drained from the ship. Geordi is instructed to keep working. He and Leah discuss the situation and possible solutions. So much technobabble. (It amuses me that spaceships are run on crystals. There's something for the New-Agers and Hippies.) They're really clicking and discuss the respective roles of designers and engineers. There are periods of disagreement, and each claims they know the ship better, but its all strong chemistry and seems to help with problem solving.
Firing on the devices holding the ship just gives the trap more power, increasing the radiation. Picard shuts down all non-essential systems to conserve power and keep the shields going. Geordi asks for his holodeck programme back, Picard gives him an hour. Geordi and Leah continue their work. As a part of the computer Leah can do things quicker than a human, and at first Geordi thinks of giving control over to the Computer. Picard is willing to try it, but projections show the ship is unable to escape before the radiation becomes fatal. Then Geordi realises that if they shut off everything except basic life support and 2 thrusters they can glide out on manual. It's a 50/50 chance, but there's nothing else to try and time is running out. Data steers the ship around debris and asteroids until they are safe. Then the devices that trapped them are destroyed. Picard Likes Old Stuff
Picard is practically giddy at the chance to poke around an thousand year-old ship. Riker tries to stop him, because sometimes it's his job to fret about Picard like a neurotic parent. Picard mentions ships in bottles, which he built as a kid. This reference means nothing to Riker, Worf and Data. But O'Brien made ships in bottles as a kid, so he totally gets it.
On the old ship the crew are dead at their posts, and Picard admires the ship design. Luckily there are no xenomorph eggs and no sign of face hugging or chest bursting.

Blind Engineering
Geordi is bad at dating. He doesn't understand why, because he's so good at engineering and you'd think there would be transferable skills. (Of course if he were able to ask Swiss Tony he'd be told that fixing a starship is much like making love to a beautiful woman.)

Geordi researches useful information, and being in the future means that notes can be really interactive. However I think he takes things a bit too far, when he makes the Computer approximate Dr Bramh's personality. It seems like there's probably a reason that info is restricted. It's lucky that the chemistry between Geordi and holo-Leah helps the process, he could quite easily have become distracted, awkward and eager to please, like he was with that real lady at the start of the episode.
It's a shame that there was absolutely no one else on board that Geordi could discuss the problem with. You'd think the Chief of Engineering could find loads of people. I bet if there were any engineers on board they'd be more than willing to help save the ship, and their own lives. They might even feel resentful at being sidelined for a holodeck simulation. If Geordi did have any staff then this episode could be viewed as a real failure in leadership and people management. Good thing there are absolutely no engineers on the Enterprise besides Geordi La Forge.
I mean, I suppose he could have asked Wesley to help, they've collaborated successfully in the past, but Wesley isn't technically an engineer, so that might not have been fair.

Geordi asks Guinan what she wants in a man. Then he seems surprised that her response is personal to her and therefore not helpful to him. Goodness, its as though women were individuals with their own preferences or something.* Guinan tries to point out that maybe Geordi's been trying too hard, but he doesn't seem to get it.
Turns out Guinan likes bald men, because a bald man took care of her once. Is this part of her backstory with Picard?


Holo-Engineering
I'm glad that personnel files are restricted for use in holodeck simulations, because there are too many ways that could get creepy. Would you want someone making a duplicate of you and doing whatever they wanted to it? Of course what Geordi does is basically get around the restriction, using an image (which is apparently freely available) and getting the Computer to estimate a personality based on an appearance at a conference. Again the fact that the Computer has just created life -albeit a copy in this case- is not given much weight, just as it wasn't in Elementary, Dear Data (which should have been Elementary, Dear Geordi - as he was playing Watson).

The difference between Computer-run Dr Bramhs and person-based Leah is enormous. I don't quite get why Leah is so friendly and familiar with Geordi. At one point, after offering to cook him dinner, she massages his shoulders because she thought it would feel good. Geordi stops her because he realises that's it's not appropriate for him to feel good in the midst of a deadly crisis. I wonder if the real woman is like that, or whether holo-people are programmed that way. Would the real Leah Brahms approve of this? We don't know, because like anything the holodeck does (especially women), she's part-fantasy.
The usefulness of the holodeck for engineering simulations is clear, as Geordi recreates the shipyard that built the Enterprise, as well as the designer. The holodecks obviously have uses besides recreation, but those don't seem to be standard. Picard is surprised that Geordi is using a holodeck at all, and more surprised to find him alone with a holo-lady.

Staff Meetings: 2
1. Geordi explains that the Enterprise is stuck, just like the other ship, and that their power is dropping. Worf explains that the radiation interferes with the scanners, so they can't tell where its coming from. Riker suggests returning to the cruiser to find out if there are any answers there. Geordi is told to fix the problem.
2. On the Bridge the senior staff prepare for the worst as their demise approaches. Geordi talks to them over comms and asks for his holodeck programme back, despite the power its using. He tells Picard that its helping, so the Captain gives him an hour, even though there's under 2 hours remaining for the sheilds and the radiation has increased.

The Lessons
1. You shouldn't try too hard to be romantic.
2. Men should solve deadly problems with women -or simulations of women- they are attracted to, it is helpful and not distracting.
3. You should always check for danger before going on to old spaceships.


The End
Geordi muses to Leah that technology can't solve every problem. She says they make a good team, then tells Geordi that she is the ship and whenever he looks at or touches the engine he's actually looking at or touching her. Then she kisses him. Geordi ends the programme.
Did the Computer/ship just come on to Geordi? That's what it feels like.

In a different show this might be the start of a transhuman relationship between man and ship. At the start of the episode Geordi speaks of his prowess at stripping fusion reactors and realigning power transfer tunnels, he certainly knows his way around a spaceship. * I'm sure many people are aware of this, but it seems worth mentioning, that while it is fine to ask someone about their own experience as a woman, you absolutely cannot ever assume that any one woman speaks for all women. Anyone who claims to speak for all women has an inflated sense of their own opinion.
Posted by Catherine Hill at 18:06