Troi gets involved with a guy I think is sleazy, but she seems to like him for a while.

Picard asks Troi join the guests looking at the wormhole. The premier of a planet has just discovered the first stable wormhole. She's holding negotiations on the Enterprise in the hopes that the wormhole will bring prosperity. The negotiators are mustached-human (Mendoza) for the Federation; a tall, big-headed guy for tall, big-headed aliens; a non-mustached-human (Ral) a freelance negotiator. Ral is accompanied by a woman everyone pretends they can't see, and Troi can't keep her eyes off him. Everyone watches the wormhole become visible. Unexpected Ferengi crash a meeting between the premier and negotiatiors and make an unneccessary fuss about chairs before offering to top anyone's offer. 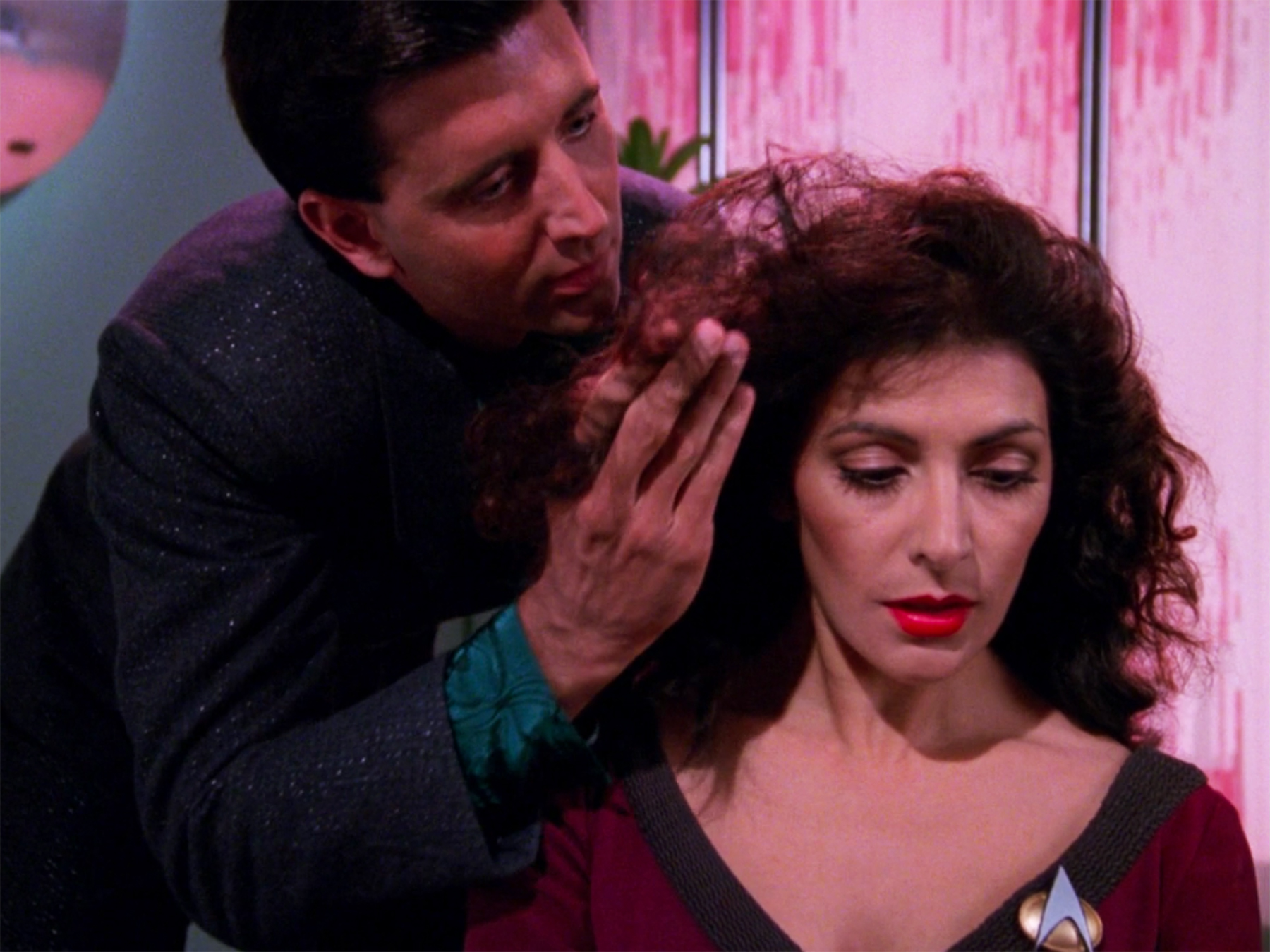 Troi looks up Ral's personnel file, it's the Star Trek version of Googling him. Ral arrives, there's flirting and weird hair stroking and Ral invites himself back. When he comes back they skip dinner, though its faster than Troi normally goes. Picard, Mendoza, Riker and Data discuss the wormhole. Picard is concerned that the wormhole hasn't been tested yet and asks about sending a manned probe. The Ferengi doctor administers a poison that will give a severe -but non-lethal- allergic reaction to anyone who shakes the lead Ferengi's hand. He plans to go after Mendoza and later the Federation negotiatior collapses. The Ferengi demand to send a manned probe into the wormhole too. Picard orders Riker to take over negotiations for the Federation.

Geordi and Data go into the wormhole in a cramped pod, accompanied by a Ferengi pod. On the other side Data realises they aren't in the right place. The wormhole is supposed to come out in the gamma quadrant, but they're in the delta quadrant. Geordi, who can see the wormhole when it's not visible, sees that its being strange and they have to go back straight away. They warn the Ferengis to return, but they don't listen and after the Federation pod has gone they watch the wormhole zoom away from them. Ral and Troi get closer, and Ral confesses that he's secretly part-empath too. Ral is able to open up to Troi in a way he hasn't with other people. Troi and Crusher discuss quick and intense relationships.
The tall negotiator pulls out, the wormhole will take up too much admin and resources. Riker asks if Fed can come to an agreement to add their resources to Fed bid, but tall alien already agreed to do that with Ral, which flummoxes Riker. Troi accuses Ral of using his empathy to gain an unfair advantage in his work. He says that she does the same because she uses her empathy for her ship's advantage because she doesn't announce her abilities to everyone they encounter. In 10 Froward Ral compliments Riker's skills then tries to rub his relationship with Deanna in Riker's face, but Riker just says she'd be good for Ral.
The Ferengi ship moves and is about to fire on the wormhole, destroying the pods in the process. Picard tries to stop them. Ral comes in and talks the lead Ferengi down by announcing he's won the bid and will give the Ferengi exclusive access. Troi announces that Ral is an empath and she thinks he's been using his abilities. She also points out that the exchange between him and the Ferengi was contrived. The pod returns with Data and Geordi; they announce that the wormhole is only stable on one end and that might destabilize eventually. Though the deal is bad Ral is philosophic, there are always risks and his clients know that.


Riker: adventurer, lover middle-management
Sometimes it seems like there's no new skill to which Riker can't apply himself. This week, negotiation. Turns out it's basically poker but with higher stakes, and no cards, and no chips, so Riker will be fine. I guess. As soon as Mendoza praises Riker's observation skills you figure he's going to have to take over.
Riker displays a very sensible attitude towards Deanna and Ral, he certainly better behaved than he has in the past. *cough*Haven*cough* Ral tries to use his relationship with Deanna to rile Riker, but as Riker points out he's fine with where he and Deanna are now, and if Ral brings her happiness that's fine by him. Riker also shrewdly points out that Ral could be improved by Deanna's influence, but doubts Ral will see that. I wonder if Ral's realisation at the end means he was influenced by Riker's words?

Blind Engineering
The wormhole is only visible every 233 minutes when the radiation builds up. Geordi is the only one who can see the wormhole all the time. This saves him and Data from being trapped in the delta quadrant.

Troi's empathy is useful in revealing the 'scene' between Ral and the Ferengi. She points out that neither was tense during the supposed standoff, as if they were reading a script. Ral is tense as soon as it looks like she's about to reveal his secret. Ral himself points out earlier that empathy isn't much different to simply reading a person, which is what I suspect Troi usually does.

Why I don't like Ral
1. When we first see him Ral has a mute, nameless, female on his arm like an ornament. How sleazy. He apparently sends her away after meeting Troi, she might as well have been a pair of cufflinks.
2. Ral criticises Deanna for being 'Counsellor' Troi, suggesting she is too devoted to her work. He's only just met her so I don't think he can judge, especially considering his devotion to his own work. He may also be using it as a distancing technique, trying to stop her finding out about him.
3. He's overly forward and the hair stroking is weird. I'm not even sure Troi enjoys it. Then he says he's coming round later and she doesn't say no, WHICH IS NOT THE SAME AS YES! Stop promoting creepy/presumptuous behaviour as romantic, BAD TV!*
4. He suggests he used his empathy to influence her at first, which I don't think is right. Though Troi doesn't seem worried by that, so maybe among empaths that's fine?
5. Ral tries to rub his relationship with Deanna in Riker's face, after finding out that Riker is her ex.
6. When she raises the question of empath ethics in relation to his work he immediately turns it round on her. Not sure if he's defensive, trying to get the upper hand, or actually believes that. Still it seems like he must have a reason for keeping his empathy so secret.

Why their relationship works
1. Deanna's definitely attracted to him. Though is that because he used empathy to influence her?
2. His attitude towards her work may be a way of getting her to focus on herself as a person outside of her job. He says she must get tired of hearing others talk about their lives and doesn't want to add to that.
3. Ral makes Deanna happy. It's different to other relationships she's had, but she's enjoying it.
4. He is attentive to her. In one scene he's massaging her feet and offering to prolong negotiations so they can be together longer.
5. He makes himself vulnerable by telling her his secret. He says he felt isolated and hardened his heart until he met her, and he talks about himself and his family honestly, which I don't think he's used to doing.
6. He eventually realises that he wants to change, and it's being with her that has made him examine himself. He asks her to stay with him and help him change, he knows he needs her. 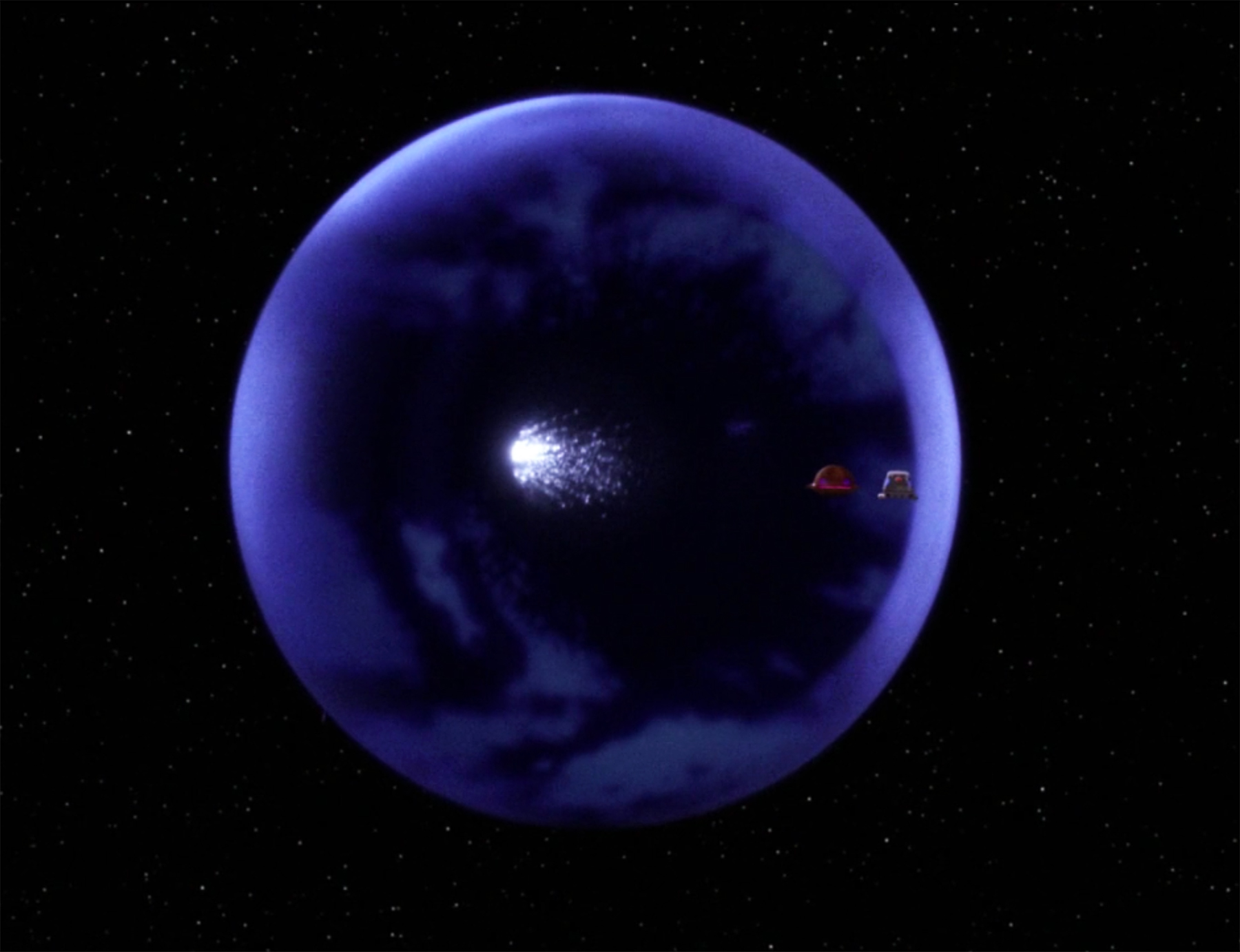 As a DS9 fan I may be biased, but the wormhole in this episode doesn't look as good as the one by Bajor. Of course this may be to do with changing special effects tech.
The Premier infodumps about her planet. "And as you all know"... why say it again then? The planet is inhospitable to most other races, which is why the negotiations are on the Enterprise. Their species have long relied on others. They have no natural resources. Not sure how that works? It's later revealed that they don't have manned spaceflight and discovered the wormhole with a probe. It sounds like they're pre-warp, so surely they should be left to themselves? Except they clearly know about the interstellar community, it sounds as though they've already had contact with space-faring races. They can't use the wormhole themselves, but the premier seems to think they can become prosperous selling the rights to it. It's actually really sad for her when it turns out to be no use. The episode doesn't seem to care about that, but I thought it was a shame. 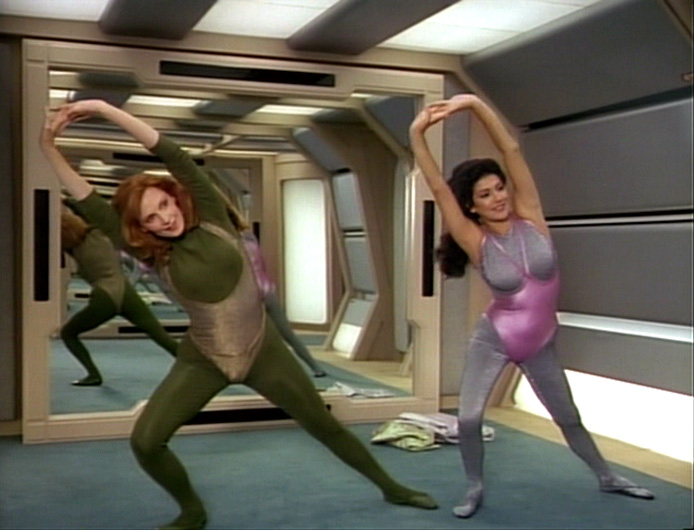 Deanna joins Beverley in a room with two parallel mirrors and they do, I dunno, some kind of exercising with stretching and hand holding. I don't know if there's another use for that room. They discuss Deanna's relationship with Ral. Deanna is happy and out of control and seems confused that there's nothing rational to their relationship. Beverly points out that you don't always need rational. Troi isn't used to this kind of relationship and asks if it's possible to fall in love in one day. Beverly says she did, but that relationship only lasted a week. It took months for her to figure it out with her husband. Troi considers whether she should slow down and catch her breath, but she and Beverly both say no. I think this means it's more serious for Ral than Troi. Nice as this chat-while-stretching is (I'm not sure if this is meant to be sexy, is it?) it definitely doesn't pass the Bechdel test as they're talking about men.

The End
Ral is leaving, he's been recalled to explain. He doesn't seem worried about his job, his employers understand the stakes and he's done good work for them before. He admits to Troi that he sensed the premier was going to go with the Federation so he did whatever he could to change that. He says he's examined himself and wants to change. He asks Troi to come with him and be his conscience. She says she already has a job as Counsellor.

It's cool that she knows what she wants and is proud of her work despite his initial criticism of it. 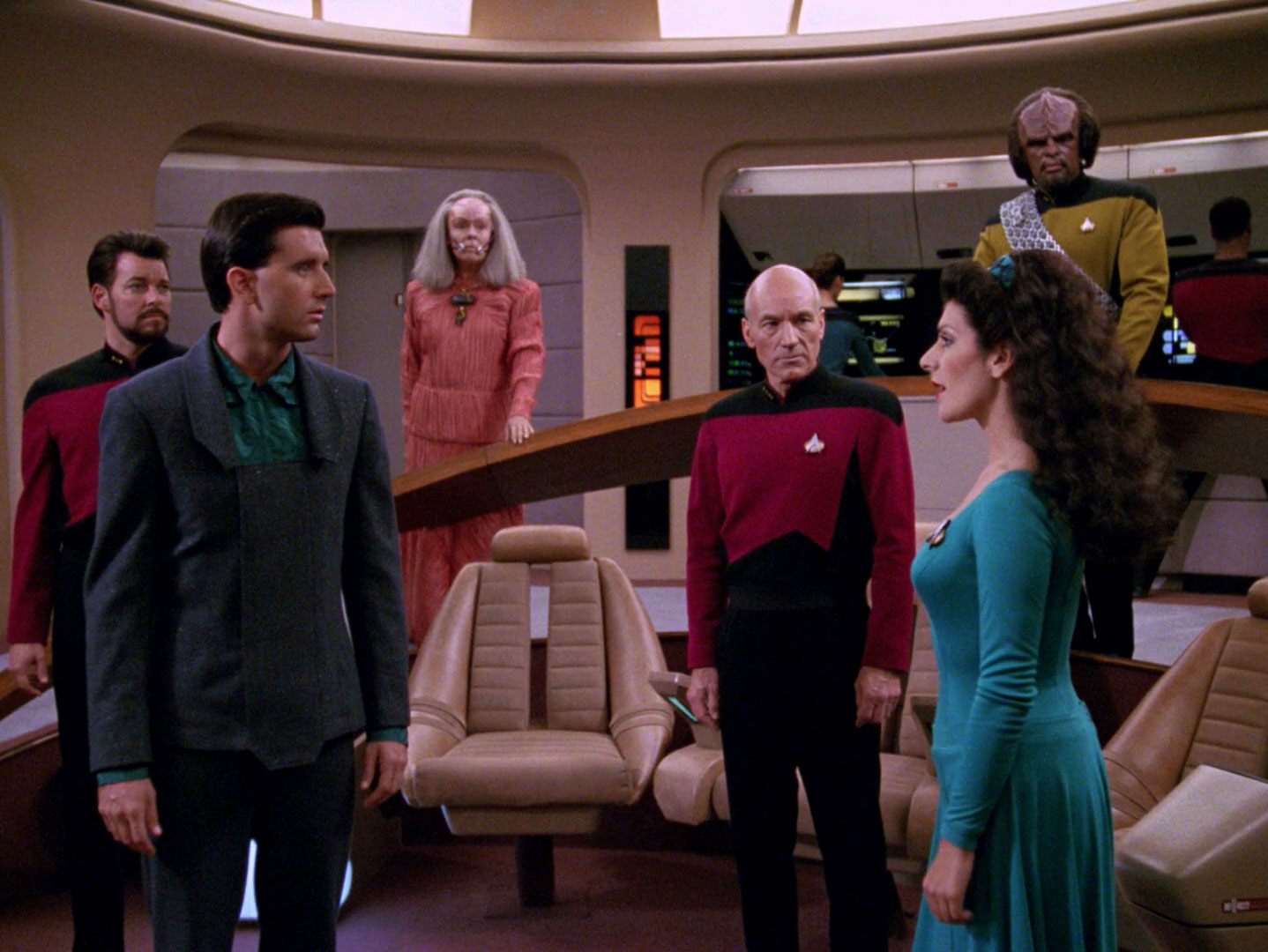 * I wish I could say that that was the 80s and today this doesn't happen, but it still does.
Posted by Catherine Hill at 18:36