Romulans are suspicious and unpleasant folk, and it's not just those slanty eyebrows. Riker, Geordi and Worf beam down to a really stormy planet where their equipment doesn't work. They find the remains of a Romulan ship, which shouldn't be in Federation space. Worf finds an angry Romulan who tries to strangle him, so Worf punches him out. Geordi falls down a deep hole. Worf and Riker can't hear him and have to beam back with the injured Romulan.
There are a few Romulans in this episode, so I'm giving them handy abbreviations.* Crusher has trouble with the biology of Enterprise Romulan (ER), the radiation on the planet damaged his brain and she needs to find someone who can donate some biobabble stuff. Riker tries to question ER, but he refuses to say anything. Attempts to find Geordi are foiled by the electromagnetic storms. Wesley suggests sending down a probe with a beam that cuts through the storms. Geordi will see it with his visor and can alter the beam to let them know he's there. The Enterprise intercepts a Romulan transmission assuring the crashed ship that help is coming. Picard hails the ship and tells them they've recovered one Romulan and will bring him to the Neutral Zone. Picard tells the Romulan Captain (RC) he can't enter Federation space. RC expects them to arrive in good time.

Geordi sees ore in the rocks, melts it into picks with his phaser and uses the picks to climb out of the hole. The probe with the beam lands and Geordi heads towards it. A Romulan sneaks up behind him and knocks him out. He wakes as a captive and the planet Romulan (PR) refuses to listen to Geordi when he says he has an escape. A rock fall hits PR, who is briefly stunned, Geordi carries him to a nearby cave and DOESN'T GET THE PHASER. Geordi asks if PR is OK and gets a phaser in the face for his efforts. Geordi and PR talk at odds. They're being badly effected by the radiation; Geordi has trouble seeing and PR can't walk, but he still won't let Geordi move. Eventually PR's resolve/health weaken and he agrees to move, but by then Geordi can't see anymore. Geordi is close to giving up, but PR goads him and suggests Geordi use his visor and tricorder together. Geordi can't make the modifications by touch and has to talk PR through it. When it's done Geordi carries while PR navigates and they find the beacon. Geordi has to guide PR through altering the beam.
Crusher tells Worf that he's the only crewmember with the right bio-whatsit to save ER. Worf's parents were killed in a Romulan massacre and he refuses to donate, preferring to let ER die. Riker speaks to him about it. ER gets worse, but he would rather die than get a transfusion (or whatever) from a Klingon. The Romulan ship sees that the Enterprise is not at the Neutral Zone, Picard explains they have crew stuck on the planet. RC doesn't accept the delay and says he's coming to them. Just as Picard is about to send down an away team for Geordi the Romulan ship breaches the border and the Enterprise goes into red alert. Picard speaks to Worf about donating, but he won't order him, so Worf won't donate. Then ER dies.

The Romulan ship arrives during a brief window in the storm. RC demands his man, Picard tells him he shouldn't have left the Neutral Zone. Picard says the man is dead, the transmission ends with a threat from RC. Shields are raised, weapons are locked when Geordi alters the beam. They detect 2 lifeforms and assume that there's a 2nd Romulan. Picard hails RC and speeches about trust, saying there's another Romulan and advises that he will lower the shields in order to beam both their men. Of course RC has the option to fire on them. Picard's speeching works and RC asks for his man back. Geordi and PR are beamed to the bridge and PR tells RC that Geordi saved his life. Picard tells RC to power down his weapons and the Enterprise will escort them back to the Neutral Zone.


Guest Star
The Romulan Captain is G'Kar from Babylon 5. It's different alien makeup, but once the internet told me it was him I could totally see it. The actor Andreas Katsulas sadly died a few years ago.
I was listening to a podcast about Babylon 5 recently and there have been more deaths of Bab5 cast members than Star Trek TOS (which aired nearly 30 years before), which is strange and sad.

Oh Captain My Captain
Picard tries to rescue Geordi, even though he's got an impatient Romulan Captain heading towards the border. Picard explains the delay to RC, but describes a 'team' stuck on the planet, not one man. I expect that's him being diplomatic. As usual with these communications Picard is portrayed as reasonable and the other side are angry, untrustworthy and hostile. In this case RC does attempt to be diplomatic too, pointing out it's a mission of mercy, but that doesn't last long. Of course everything's from Federation point of view (one of the reasons I miss DS9).
At the tense point when Picard must choose between rescuing Geordi (and a Romulan) and the safety of the ship, he speeches at RC. Stuff about trust and repercussions. He puts the ship in a position of weakness, but morally he's in a position of strength. Though the transmission isn't accepted it must get through because the speeching works, as usual.

Geordi is really resourceful, managing to get himself out the hole using only his wits, his bare hands, his mineral-detecting visor and his mineral melting phaser. Still it takes lateral thinking to come up with that plan and climbing out of the hole took strength. Geordi understands the neutrino beacon and immediately knows Wesley did it. Of course, as demonstrated in the previous episode, there are no other engineers on the Enterprise, so it makes sense that Wesley is the only person on board who could have come up with that.
Geordi is too friendly to the Romulan who knocks him out, steals his phaser and takes him prisoner. I get that Geordi wanted to help the guy after he was stunned, but either he forgot to grab the phaser or he decided not to take it back on principle. In one version he's a bit daft, in the other it's just to Pollyanna for words. Of course Geordi's attempts to reason with PR don't work, cos non-Federation folk are angry, untrustworthy and hostile. It's only once pain and/or radiation have weakened his resolve that PR sees sense. Then teamwork, yay!

Visor-vision
We get to see Geordi's rainbow-coloured view of things for the first time since Heart of Glory (that Klingon episode) in series 1. It certainly makes the drab storm planet a lot more visually interesting. The visor allows Geordi to see the hidden minerals that he uses to escape from the hole. Of course it would have been nice if he saw the hole before falling in, but you can't have everything. 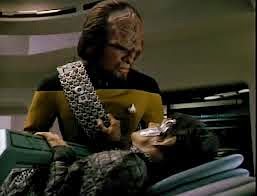 Unlikely as it is (since Romulans are most like Vulcans and certainly look more like humans than Klingons), Worf is the only person on the ship with the right biological whatsit to save the dying ER. Worf is also (as far as we know) the only person on the ship whose parents were kiled by Romulans. I think that's some sort of irony.
Worf makes his feelings plain to everyone who asks,  he will do it if ordered, he will not do it of his own accord. Crusher calls Worf to see ER's condition and Worf tells him the situation. ER says he would refuse Worf's bio-whatsit anyway, on grounds of racism. After that I'm not sure there's so much of a dilemma. Worf won't give his stuff, ER would rather die than have his stuff. If Worf had been persuaded and ER saved surely that would have been going against the patient's wishes? Though I did wonder for a moment whether Worf would donate just to spite him.


Guide Romulans for the Blind
The Romulans, being the Federation's enemy, are unpleasant. If Vulcans are elves, then Romulans are dark elves. If Vulcans have no emotions besides smugness, then Romulans have anger, arrogance and suspicion.
ER, lying shipwrecked on an inhospitable planet, immediately tries to strangle Worf rather than welcoming possible rescue. He refuses to answer Riker's questions, and is scornful and bigoted towards Worf as the sickbay staff try to save him.
RC won't admit to any wrongdoing, no matter how much he's caught out, and though he tries to be tactful t first he gets evasive and angry. Troi points out that behind his smile is hostility and determination. (This piece of obviousness is pretty much Troi's only line, apparently no one could think of a single thing for her to do this episode.) RC claims the crashed Romulan ship was a one-man vessel and went off course by accident. He says he's entering Federation space on a rescue mission. He makes demands of Picard, while not listening to what he says. Even after Picard is open with him and acts in good faith RC is still grudging.
Through PR we learn that Romulans (being a bad lot) do not waste their time on disabled children. It seems blind Romulan children do not survive to adulthood. PR is determined not to reveal information and not to give in to the Federation, even if it means his death. He won't allow Geordi to try and rescue them both until he's succumbed to great pain and can't move himself, though at first I think he doesn't believe Geordi. 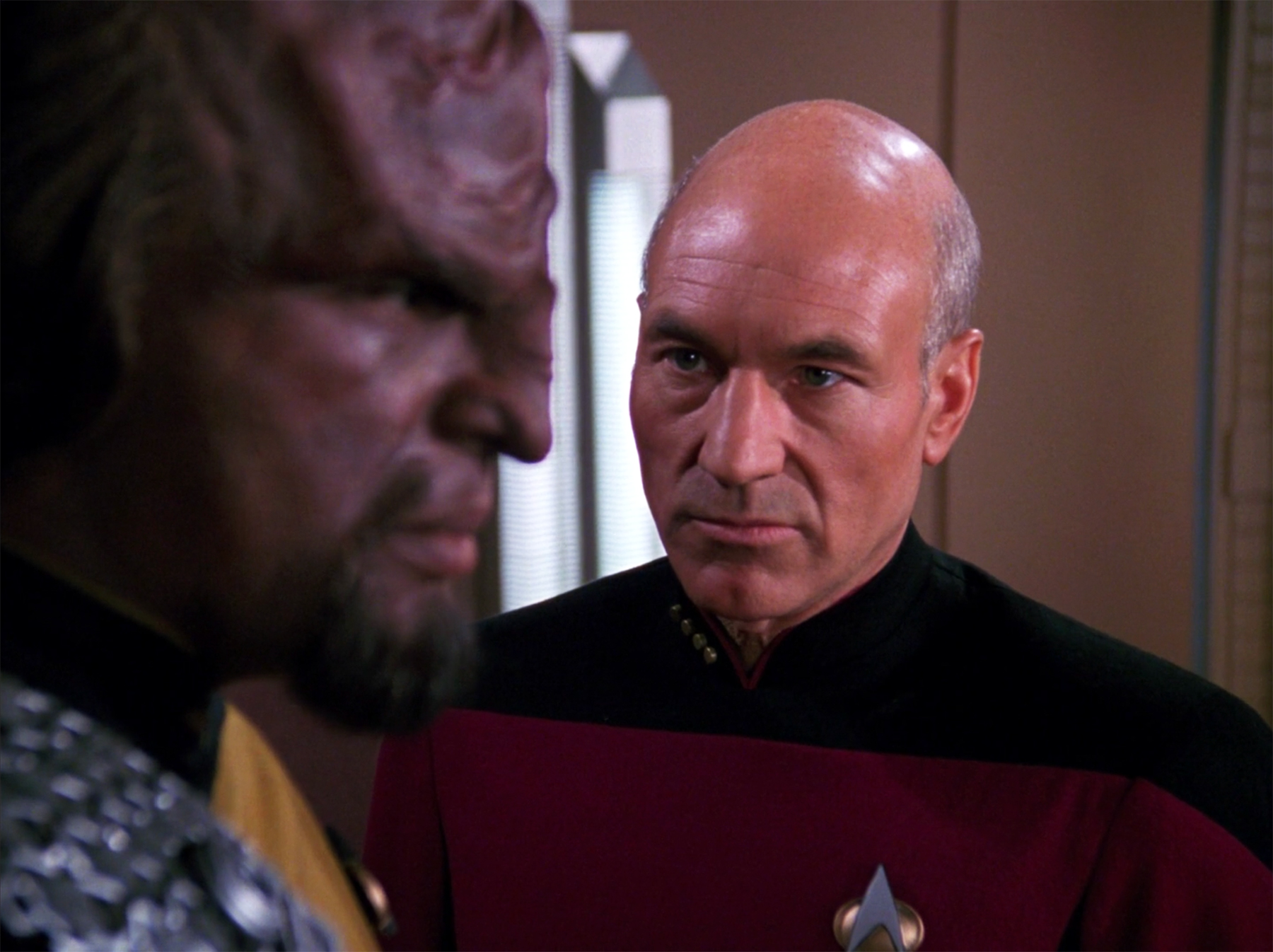 1. Crusher tells Worf that he's got the only bio-whatsit that's compatible with the Romulan. Donating poses no risk. Worf refuses. Crusher tries to empathise with Worf's feelings, but points out that it's not relevant now and this Romulan did not kill his parents. Worf says his feelings are always relevant and he will let the Romulan die.
2. Worf goes to Riker to discuss the situation. Riker says he understands Worf's bitterness and asks if he'll always blame all Romulans, what if there were peace in the future? Riker points out that used to be that attitude between humans and Klingons, should generations hold on to biterness.
3. Picard summons Worf and explains that if the Romulan dies then RC will likely use it as an excuse for an incident. Worf says that he has thought about the situation. Picard explains that command morals aren't always clear, he has to balance indiivudal needs against wider ones.Worf says he'll donate if ordered, but Picard doesn't want to order him. Worf refuses when Picard asks.

Won't Somebody Think of Children
When the Romulans have breached the border, suggesting upcoming conflict, that would have been a good time to split the ship and save family members from facing combat.

Death by Space Misadventure
A Romulan found on an inhospitable storm planet, near the wreckage of his ship (which shouldn't have been there), is rescued by his enemies but dies of his injuries. The End
Picard welcomes Geordi back, and the engineer gives credit to PR. Picard orders Geordi and Worf to take PR to the transporter room so he can be returned to his people. Riker comments that it was a close call, and Picard agrees that brinkmanship is dangerous. 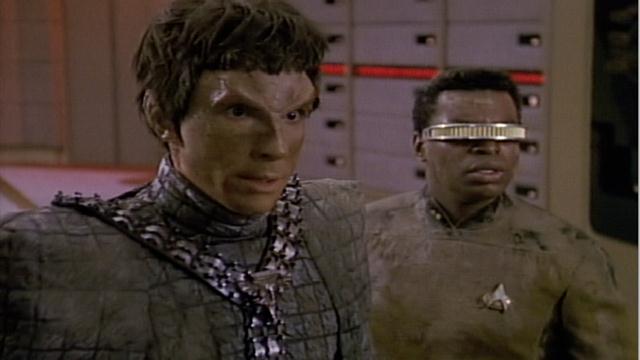 * Enterprise Romulan = ER, Romulan Captain = RC, Planet Romulan = PR.
I know these initials all stand for other things too.
Posted by Catherine Hill at 18:12