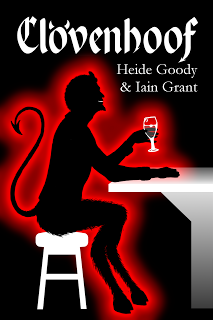 The Devil gets the sack and is sent to retirement in Birmingham. Taking on the name of Jeremy Clovenhoof the confused former-Prince of Lies tries to navigate life on Earth, discovering a liking for lambrini, a talent for heavy metal, the trials of finding a suitable job and eventually that things aren't quite right in both Heaven and Hell. Joining Clovenhoof are his unfortunate neighbours, introverted Ben and calculating Nerys. In a book that features spying angels, heavenly bureaucracy, cannibalism, murder and a lot of booze, no one is quite what they seem.


Clovenhoof is set very firmly in the city I live in, which I've known from the start, but is still a little odd to me.* I was lucky enough to buy a paperback copy from a local writing event last year. Most of the action takes place in the north of the city (Boldmere and Sutton Coldfield, for those who're interested), an area I'm not familiar with. However there is a heavy metal show in the Town Hall, which I do know and so I amused at the idea of the Devil booking it and just blithely handing out tickets. Local interest aside Clovenhoof is a pacy and witty read, as long as you're a fan of dark comedy. Clovenhoof starts as a strange, slightly tragic, figure who is forced to live a life he never expected and knows nothing about. Despite his selfishness and anger he is very amusing and certainly makes things interesting, and you even start to feel sympathy for him at times, even though he does things that would be inexcusable for most characters.

The other main characters are Clovenhoof's neighbours. Ben is a stereotypical geeky character, who is bad with people but good with books and wargaming miniatures. Clovenhoof certainly livens up Ben's life, though it's reveal that Ben had a strange dark side even before the Devil came to live next door. Nerys, who lives in the flat above with her old aunt, is a somewhat calculating young women, always trying to plan her life, especially her lovelife, with lists and charts. She seems a bit shallow at first, but proves to having a caring side, even if it can be hard to see. Then there's the Archangel Michael, who keeps an eye on Clovenhoof and manages to get him out of trouble at first. Michael is calm, considerate, moral and turns out to be a bit of a smug git. The supporting cast includes a satanist man-child, a pair of suspect old women, a perceptive bartender, Joan of Arc, a female vicar, St Francis, and an obsequious assistant.

The premise of the book is silly, and that holds up throughout due to the light tone and quick pace. The characters' flaws and oddities add to the tone and create a strange comedy within a setting that is real. The odd events on Earth are interspersed with Heavenly committee meetings, showing that there's something rotten in the Kingdom of God, and flashbacks to Satan's time in Hell and how he was manoeuvred out of his position. There are occasional reflective moments in the book, but they are unusual and madcap adventures are the main staple of the story.

Clovenhoof is available as an ebook on Amazon and is published by Pigeon Park Press.


* Birmingham is the second city of the UK, and the most underrepresented city in UK media. It does not often feature in books, especially not SF ones.
Posted by Catherine Hill at 12:42