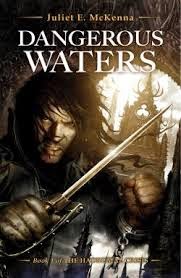 I've been meaning to read this book for a while. My husband kindly got a copy signed for me from a convention over a year ago, but my TBR pile wasn't too organised then*. Plus I wanted to finish the Chronicles of the Lescari Revolution (reviewed here previously) first. It was good that I did finish that first, as an early part of Dangerous Waters features a character who dies in the previous series (though I half forgot that as I was reading) showing that there is some definite overlap in time. It's clear that McKenna is always building upon events in her world with each book, and so the events of one series have consequences for things that happen later. Some of the action of this book takes place in the southern archipelago, which was introduced back in Swordsman's Oath and is the setting of the Aldabreshin Compass quartet (of which I've only read the first book). Not that you have to read each series in order, the author takes care to give you the relevant information without infodumping.

As I have come to expect with Juliet E McKenna's books this is a story which deals with people's lives and how changing situations, decisions and external forces affect them. Lady Zurenne is the widow of a noble with modest resources, after her husband's death she was held captive in her own home by a sadistic man and is desperate not to be ruled by any man again. However her society is one which clearly has no time for women's voices and Zurenne is a product of this. Despite her inner turmoil and growing resolution she is not daring or bold enough to ask for what she wants or challenge authority set before her, so she ends up making poor decisions in order to quietly get into a better situation. Her eldest daughter shows a little more spirit, probably because of her youth and what she's been through, but I cannot blame Zurenne for being what she was always expected and trained to be. Soldier Corrain served Zurenne's husband and was captured by southern slavers after his master was betrayed. His grim determination to escape and seek vengeance carries him through the first part of the book. Corrain is a very flawed character, driven by his loyalty, he's also misanthropic and apparently unable to see value in other methods of doing things. Quick to dismiss the foreign, even when seeking help from other lands. His fellow captive, a youth called Hosh, is able to adapt to their situation, where Corrain doesn't even try. His story is one of relentlessly seeking his goals, a questing figure with none of the romance that word implies. He shows no flexibility in his viewpoint and has little else in his life besides revenge. Much like Zurenne he is a certain way due to his upbringing and life experiences and seems unable (or perhaps unwilling) to break from the role he has imagined for himself.

The other main group of characters are the wizards. Hadrumal is the hidden island of the elemental mages, and so in a series called the Hadrumal Crisis you expect them to play a big part. Magewoman Jilseth works for the Archmage to protect the name of wizardry on the mainland. After her actions in the Lescari Chronciles she is trying to clear up the mess left by a renegade mage. In opposition to Zurenne Jilseth does not consider her gender a setback and is confident in her own abilities. The two women do not get on, but Jilseth must stay with Zurenne for a while as part of her work. In Hadrumal the debate about whether mages should get involved in mainland politics and conflicts rages on, with each side stating their opinions, and tensions rising, though not yet spilling over. There's a group of mages, Jilseth and her friends, that support the Archmage's policy, and then there's a group of mages who hold a different view. Neither side is painted as bad, and there much debate and argument with reasoning set out in conversation. Hadrumal has a collegial atmosphere and while there are rivalries and personal disagreements everyone conducts themselves in a mature way. However when an unexpected magic user appears from the west, not bound by any of the decrees or rules of the Archmage or Hadrumal, and suddenly the future and reputation of magecraft look far from certain. I'm glad that though there are disagreements in the wizards' community everyone behaves like adults even when they aren't happy about the situation. I also liked that the book explores the repercussions of wizards not getting involved, not just through discussion, but through the actual events of book. There's also stark demonstration of how magic can change the outcome of any encounter, and why that's sometimes necessary and often dangerous.


* It's not much more organised now, but it is mostly one pile rather than books spread across the house.
Posted by Catherine Hill at 20:36