What Happens
The Enterprise brings medical supplies to a non-Federation planet with a trading relationship. There's civil unrest and internal terrorism from separatists, so away teams are armed. Crusher, Worf and Data are on the planet when a bomb goes off. Crusher helps the wounded and refuses to beam away though Data and Picard want her to. A separatist appears, grabs Crusher and disappears. Data later explains that Crusher wasn't beamed away so they can't trace her. Picard won't let Wesley go to the planet, but asks him to help figure out how the kidnapper jumped away. Riker visits the local Police Chief, she tells him the terrorists have been translocating without trace for two months. 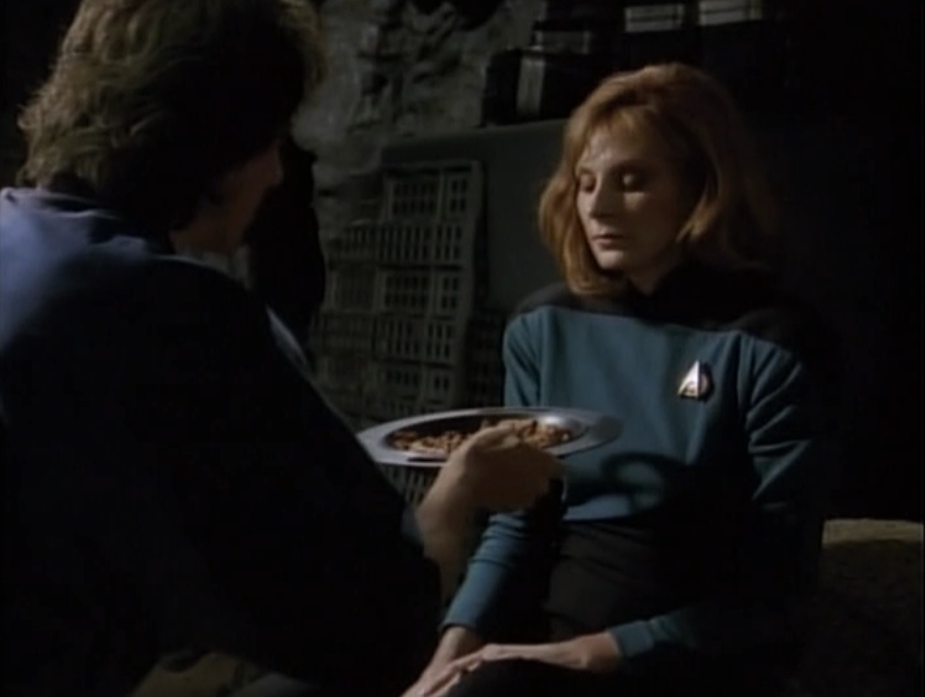 Crusher is in a cave and initially refuses to communicate. Her captor wants a Federation doctor to help his people. He claims the Federation have taken sides by bringing supplies to the government, Crusher refutes this. She's given stolen Federation medical supplies and shown a room of sick people. She tries to help them, but they're dying from warped DNA. The separatist leader says it was caused by their dimension-shifting device, but they won't stop using it. Riker is shocked by the police crackdowns on suspected separatist-sympathisers, the Chief says it was worse before she started. Data, Geordi and Wesley examine a terrorist device and realise it's a harmful transporter-alternative. They may be able to track it, but need more info. 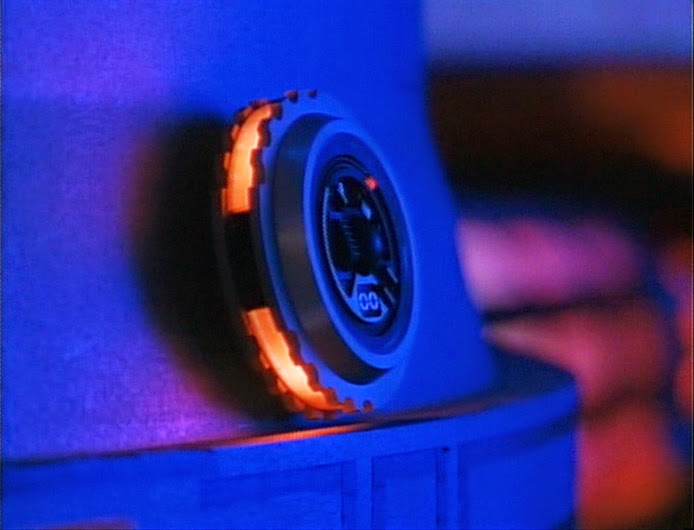 Riker tells a sympathiser in custody that the Federation will negotiate for Crusher's return, which annoys the Chief. Crusher argues with her captor about his methods. Picard and Data discuss the moral issues of using violence for political change. Riker's message is passed to Leader, who says Star Fleet are working with the police and organising mass arrests. He tells Crusher that they'll strike against the Enterprise, and he isn't sympathetic to her motherly concern, his son died in a cell at 13. Separatists jump onto Enterprise, they can't be stopped by forcefields or bombs. They kill an engineer and put a bomb on the engine. Worf is shot in the leg and Picard is snatched. Geordi removes the bomb just in time.
Picard and Crusher are reunited and argue about whether she should have beamed away at the start. The cave has no exits, you can only beam or jump to it. Crusher has some sympathy for her captors, but Picard disagrees. The leader again accuses Federation of taking sides, Picard won't cooperate. Leader delivers an ultimatum to Troi, in 12 hours they'll harm the hostages unless the Federation enforces a trade embargo. Wesley tracks the jump to the cave, and Riker and Chief plan a raid/rescue mission. Leader tells Crusher he may kill Picard, this angers her. Picard tells Crusher to use Leader's regard for her to help them escape. The police and away team beam into the cave and start arresting people. Chief shoots Leader just as he's about to shoot Picard. A separatist kid pulls a weapon on them, but Crusher convinces him to let them go. Picard wants Crusher to beam back immediately, but she won't let him order her back. Picard understands and respects her motives, even though it causes him a problem, and I expect that is why he doesn't have her beamed back, though the option is discussed. Even later when they are both hostages Picard says he should have beamed her back and they argue about following orders and what are reasonable orders.
Picard is pretty untactful when telling Wesley his mother's been kidnapped. He even refers to her as a potential bargaining chip. I know it's something he has to think about, but maybe don't speculate like this in front of Wesley. He sensibly doesn't let Wes go to the planet (what would the kid do there?) but he does use Wesley's skills to aid the rescue attempt.
When the Bridge is invaded by terrorists Picard fights the leader until he's jumped away.

Riker's discussions with the Police Chief present a counter-argument to Crusher's interactions with the terrorist leader. He objects to some of the oppressive police methods, but the Chief tells him that she's improved things, under her predecessors suspects often didn't survive their time in custody. She clearly has a deep hatred for the separatists, and this has developed since she was posted there and seen the atrocities they've committed. She was more moderate when she was elsewhere, but now she just wants to return to a more peaceful life. She's become hard, suspicious and worn down, and knows this, but that's what she had to do in the situation. She suggests that Federation tech would help them with the problem, but knows Riker's answer must be no. This demonstrates that the Federation are holding themselves aloof from the conflict specifically.
Riker is told that the terrorist organisation itself is small, but there are many sympathisers in the area. Riker, impatient and annoyed with the police methods, tells a sympathiser that the Federation will negotiate to get their doctor back and has him report that to his people. This angers the Chief, but she has little choice as she knows the Federation are only interested in getting their crew back.
At the end when the child who was going to shoot her is taken away the Chief observes that a new generation will just take the place of those they've stopped. Riker has more hope and points of that the kid put his gun down and that's how change starts.

Doctor Doctor
Crusher's immediate instinct is to run into danger to help others, because she's amazing. She won't allow Picard to order her back to the ship, and though she later regrets that she still argues with him about whether she should follow his orders if they're unreasonable. Beverly can get away with this kind of thing because she and Picard are old friends and they respect each others viewpoints even when they don't agree. 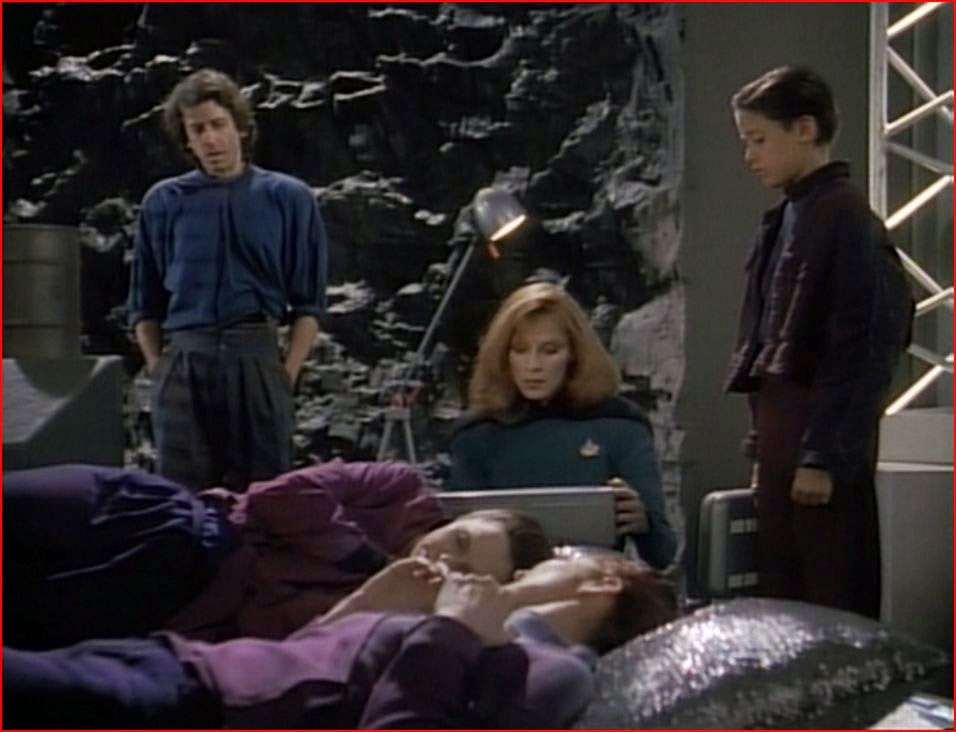 Crusher initially refuses to communicate with her captor or take food, and though this changes by necessity he doesn't find out her name until Picard shows up and blurts it out. She's in a scary situation, but courageously doesn't allow her fear to affect her. She follows her instinct to heal every time, but still holds herself apart. Her discussions with the leader explore her disgust for his actions, and his justification. He has researched Earth history (for some reason) and compares himself to George Washington, doing what he has to in order to oppose tyranny. There are times when he is presented as a sympathetic figure, his talent for drawing and obvious respect for Beverley aid this. However at other times he is ruthless and extreme. He kills and is unrepentant about what he does, putting himself and his people in danger by using the device that is killing them. He tells Beverly he'll destroy her ship (and son) and shows no concern about it. However he points out that her arguments come from a utopian viewpoint and he doesn't have that option. He's a complex and changeable character, probably to present several different faces of a complicated argument.
Picard suggests that Beverly can use her position in their captor's esteem to aid their escape. The leader draws pictures of her, though I'm not sure whether that's meant to represent romantic feelings/attraction, or something more complex. Certainly Crusher isn't sure how to react to it, but her reactions to him flip-flop as she sees different sides to him.
As she's rescued Crusher convinces a child from trying to shoot the Chief, which would lead to his death.

Blind Engineering
Geordi avoids being shot when terrorists arrive in Engineering. He has trouble removing the bomb from the engine. It can't be detected by the transporters because of the terrorist's tech, but Geordi gets around this by attaching his comm badge to the bomb and telling the transporter room to lock onto that and fling it into space.


Staff Meetings: 1
Data briefs senior crew on Crusher's abduction. Mostly the meeting is to make clear that we're dealing with something besides transporters

Security Breach
Should there be security personnel in Engineering? Seem worth considering, because this is the fourth time Engineering has been invaded. I don't even know how much security there is, or what they usually do.

Future History
When Data is talking to Picard about terrorism he cites how often it works. His list includes the Irish Unification of 2024. It will be no coincidence that Ireland came up, when this episode was created the IRA had been planting bombs in Britain for a long time. Possibly the writers thought that was something that would keep happening? Before the 'War on Terror' post-9/11 attitude to terrorism, it wasn't something that the US seemed that concerned about, probably because they weren't really experiencing it. I wonder whether a similar episode written in 2000s could have presented so many points of view? I mean having a terrorist compare himself to George Washington, it surprised me.

Death By Space Misadventure
We are told that 3 crew are dead and 4 are injured in the attack. We see one engineer shot in the attack.

The End
Returned to the Enterprise, Beverly hugs Wesley and says she hears he helped with the rescue. Wesley says it was a team effort. Picard orders the ship away. It's an upbeat ending, but not jokey. There's nothing about what's happening on the planet now. 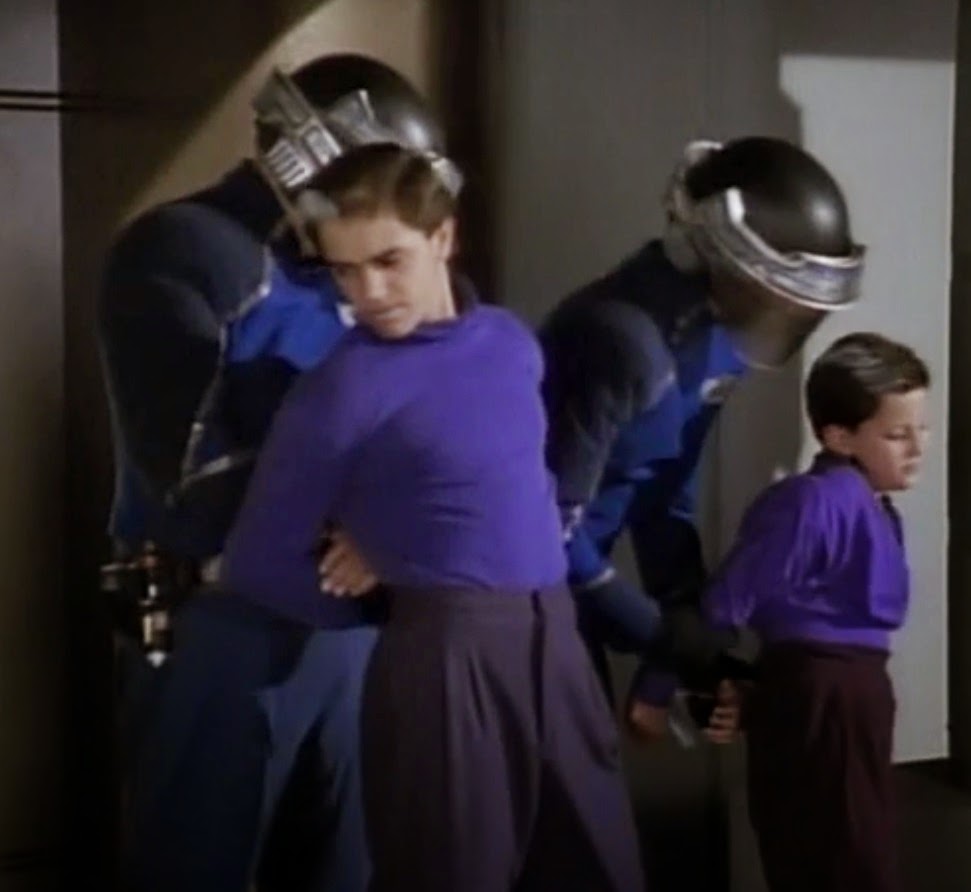