What Happens
Picard is kidnapped by a Monolith, which leaves a replica in his place. He's taken to a strange cell already occupied by a green-skinned Star Fleet cadet and a grey-skinned bureaucrat. They've tried to escape but were punished by a painful beam. Beds and discs of 'food' are available but there's nothing else for their comfort. Their captors haven't shown themselves.
On the Enterprise pseudo-Picard carries on mostly as normal, able to pick up where actual-Picard left off. He changes of ship's courses and sends them slowly to a pulsar. Pseudo-Picard tells Riker that this is one of those times when he can't be open about his reasons for doing things and Riker accepts this. Later pseudo-Picard drops in on a senior crew poker game, gives Geordi extra orders and has an odd chat with Troi. He invites Dr Crusher to dinner in his quarters. 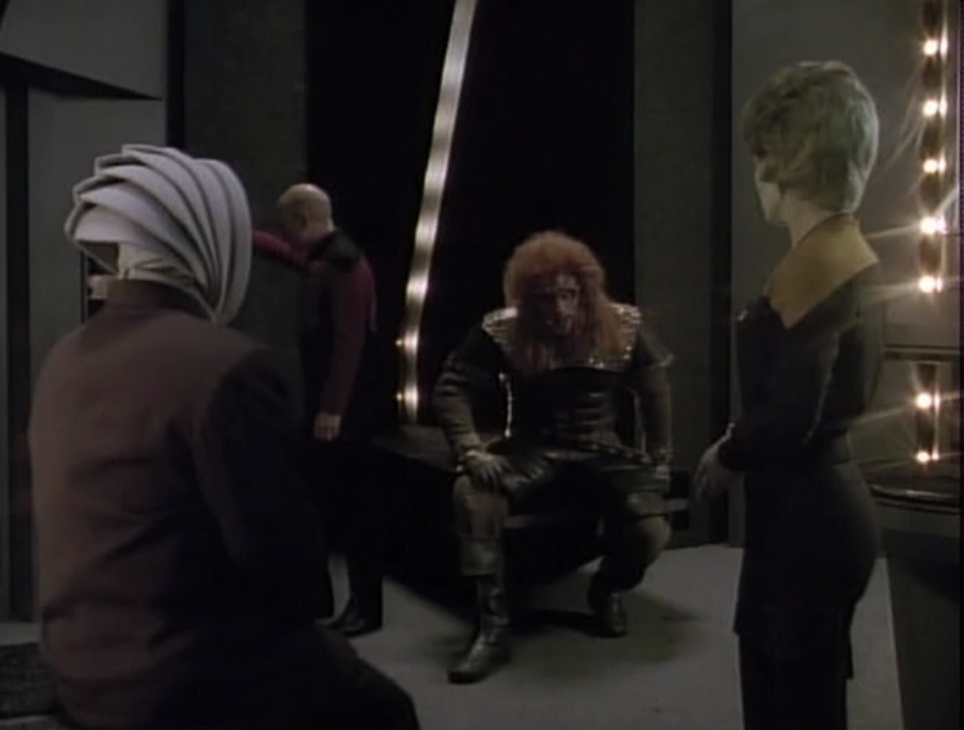 A 4th cellmate appears, a hairy, toothy, bestial fellow from a race without laws. He can't eat the food discs (though how does he immediately know they're poison, maybe they just taste gross) it's suggested he could resort to cannibalism in a few days, meaning swift escape is vital. Picard tries to figure out how to escape as each cellmate throws around distrust, paranoia and accusations. Each is riled by aspects of he others' personality. All are accused of being a collaborator or a plant.
He and Beverly have a dinner date, he seems to be playing games with her emotions, which she calls him on. Riker starts to worry about the Captain's behaviour and has a word with him but is rebuffed. Then pseudo-Picard goes to 10 Forward and sings with the crew. Riker knows something is wrong and discusses it with senior crew.
In the cell Picard gets everyone working together to get the door open, only to find a solid wall behind it.
Picard suggests this is all just an experiment. He identifies the green girl as the plant because she knew stuff about his recent missions that a cadet wouldn't know (I noticed he was suspicious that she knew too much, but assumed she was from a different time). She splits into 3 bulbous-headed aliens, who were doing a psychological experiment. They're telepathic and don't understand other types of communication. Picard orders them to return everyone. He materialises on the the Enterprise Bridge with one of the bulbous-headed guys just as Riker is accusing pseudo-Picard, who also turns into a bulbous-headed alien. Using eye contact a message is sent around the Bridge while the aliens go on about how primitive they all are. Worf drops a pink forcefield, trapping the aliens, trapping them. They complain that they cannot stand captivity. Picard points out that that's rich and sends them on their way with a warning. 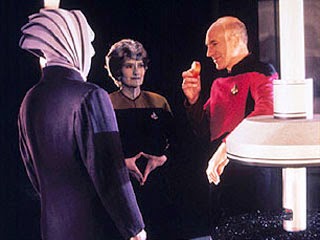 In a captive situation Picard automatically takes command, which is naturally accepted by the cadet. The other two (real) cellmates are opposites of each other and need either pushing along or reigning in. Picard uses his speeching powers to stop everyone from bickering and threatening each other. He tries to hold himself above the recriminations, but does get involved in some of the distrust, before pointing out that there's nothing they can do about it, so they might as well work together.
Psuedo-Picard seems to have all of Picard's memories, that's presumably what the Monolith scanned him for before taking him. No one notices anything different at first, he gives slightly odd orders, but there's nothing in his manner to undermine him. It's only as the replica deviates from Picard's behaviour that people become suspicious. This has happened before, back in series 1 when the Captain got possessed by that glow cloud (all hail the glow cloud). Plus there was that time a load of admirals got taken over by brain lice. Though here there's never a reason why the duplicate slowly takes them to the pulsar and then gets too close. It looked like it might be building to something, but it never did. Was it just a random test? The motives of the creature pretending to be Picard are never clear and so it's actions don't make sense. The pulsar seemed like it was only there to provide a flashy lighting effect for the confrontation scene.
The like doubling up on Patrick Stewart's roles in. It's at least the 2nd time he's appeared as 2 versions of Picard. The only other person who's close to that so far is Brent Spiner who played Lore as well as Data.

Riker: adventurer, lover, middle-management
Here Riker has to mediate between the crew and Captain. He's the main person to be suspicious of Picard's behaviour because he's probably the crew member who spends most time with Picard. His initial acceptance of Picard's secrecy works because the duplicate does what Picard would do and tells Riker there's stuff going on that he can't tell him about. However when pseudo-Picard won't address Riker's concern it rings alarm bells with Riker. As 1st Officer it's his responsibility to protect the Captain, but also to protect the crew from a Captain who may be compromised. He gathers senior staff to discuss the situation. At the end pseudo-Picard's lack of concern for crew safety is the proof Riker needs.

Pseudo-Picard asking for a physical early surprises Dr Crusher, he's normally very reluctant about it. Does this mean the duplicate is checking it's disguise? Beverly is only a little surprised that the Captain invites her to an intimate dinner in his quarters. The dinner gets a bit odd when he brings up the topic of their relationship and the choices they've made in the past. She tells him that their relative positions do stop them getting closer, but she's also happy with their current relationship. I'm glad she knows what she wants from him and is open about it. He asks her to dance and kisses her, which is clearly weird and not respecting of what she just told him. She suggests he's playing games with her. He swiftly suggests the evening is finished, ushers her out and leaves her confused in the corridor. When Riker raises his concerns Crusher mentions how strange it is that the results of the Captain's physical are identical to last time.

It's Not Easy Being Troi
Pseudo-Picard takes Troi out of the poker game to ask how the crew feel toward him and his mysterious orders. She answers that no one is worried. He asks her to let him know if their feelings of trust towards him shift. She agrees, but is concerned that he's even asking. It's clear that she can't sense that he's a duplicate, which you'd think would be a handy use for her powers. Then again she had no idea Picard had been possessed by a space cloud before, even when talking to him about it. 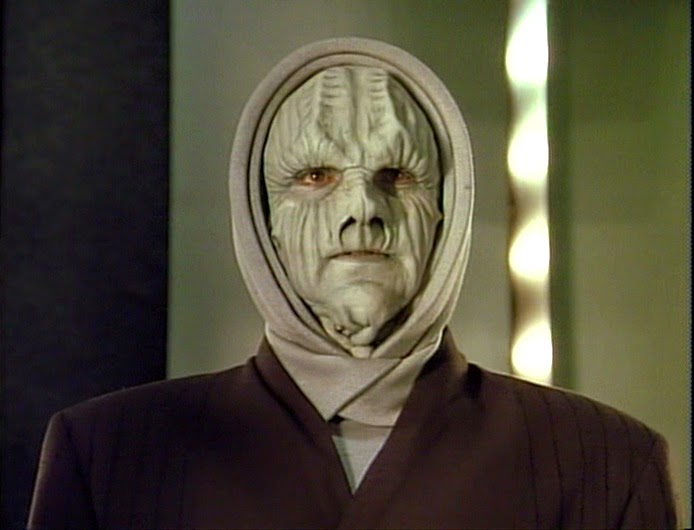 It is of course wrong to take a single individual from a group and judge the entire group by the behaviour and characteristics of that individual... unless you're using an alien on a sci-fi TV show, in which case it's standard operating procedure. The important thing is that aliens conform entirely to a type (whichever type you should need for your plot), and that type can be very quickly summed up by their appearance, actions and some brief dialogue. The grey-skinned guy is pompous and a coward, his species are known for being collaborators and simply do whatever is the most peaceable option. This of course means they have no courage, rather than acting from a moral or cultural standpoint. He also likes to meditate, which I assume plays into some kind of stereotype. 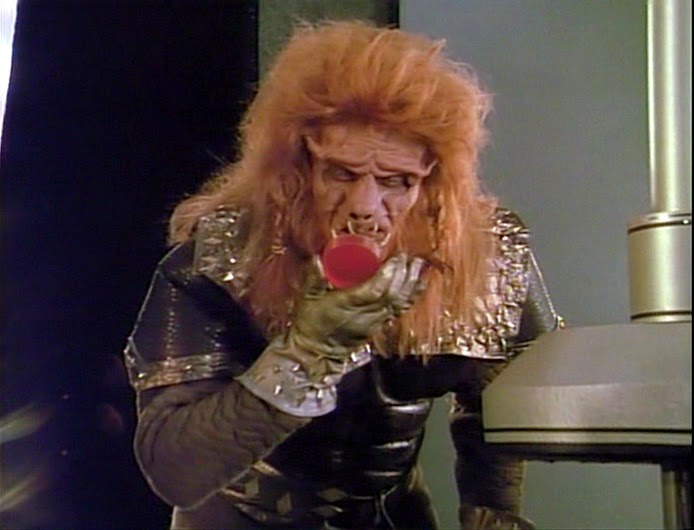 The bestial guy has big tusk-fangs, is all hairy, growly and aggressive, and it's never quite clear whether he's actually willing to resort to eating his cellmates. His people have no laws, are very violent and apparently care for no one. Picard calls him an anarchist (cos that's what anarchy is kids). Somehow his people have managed to survive without any social codes, or more likely no one outside can tell what those social codes are. I kinda feel as though he actually is what the show sometimes presents Klingons as. He and the grey-skinned guy have nothing but contempt for each other. Good thing there's a moderate, middle-of-the-road human around to balance these conflicting and equally wrong ideologies individuals. 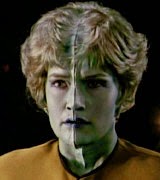 It was a little annoying that the only female character in the cell scenes turned out to be the deceiver. Plus she wasn't even real, just a disguise for some males. Well, the gender of the bulbous-headed aliens is never confirmed, but they're played by male actors and their body type looks male, so that seems to be how they're coded. I suppose in the original series Kirk would have flirted with her and probably had sex with her, where Picard treats all his cellmates according to their actions as opposed to gender. Though she is the only one that considers herself inferior to any of the others, seeing as Picard is a famous Captain and she's just a cadet. She's also the one who seems to get most upset by things. Although she gives as good as she gets when the accusations are flying.


Staff Meetings: 2
1. Pseudo-Picard calls Riker to his ready room to explain that he'll have to keep him in the dark for a few days. Riker has no qualms, these things happen.
2. Riker calls senior staff to his quarters for a secret meeting about why the Captain is being so weird. Everyone mentions something odd he's done. Data mentions the weird energy detected in the Captain's quarters before. Worf says they don't have enough evidence to mutiny. Riker says that's not what the meeting is about and ultimately decides to do nothing yet. Seems unlike Riker, but he's so loyal to Picard.

The End
Aliens dealt with Picard hopes his duplicate didn't cause trouble. Riker says it was convincing but he doesn't think the Captain is such a good singer. Picard is confused and perhaps slightly alarmed. Dr Crusher comes to the Bridge (presumably not aware of the whole duplicate thing?) and smiles at Picard in a way that makes him nervous. He orders the ship to its next destination.
I think this is meant to be lighthearted, not sure if it's actually supposed to be comical. I didn't find it particularly funny, but at least it wasn't cheesy.