I like that this is called Captain's Holiday as opposed to Captain's Vacation. Being English that is what Picard would call it. Except that he's French... and the French for holiday is vacances... so it doesn't actually make sense. But I still like it.

What Happens
Aliens turn up at Risa, a resort full of scantily-clad people (not a mainstream Midlands nightclub full of scantily-clad girls). They are looking for Picard. He's not there and he's not expected. They resolve to wait.
Picard and Troi return from difficult negotiations, Picard is grumpier than usual. Troi reckons he should a rest, as do Dr Crusher and Riker. All three try to get him to take a holiday. None of them listen to what he might enjoy in a holiday, and insist he must have fun their way. Troi eventually threatens him with her mother, and realising he'll get no peace Picard agrees to go to Risa as suggested.

Picard arrives at Risa and a lady trying to escape a Ferengi kisses him then leaves. He tries to read by and keeps being interrupted by female employees. It turns out a souvenir Riker asked him to pick up -a Horgon- is a sign that you are looking for adult fun times. Picard hides the Horgon and is bothered by a Ferengi who wants him to give a menacing message to a woman about a disc. Picard is annoyed, says he's got no idea about it and sends him away. Then the kissing lady, Vash, shows up, she's the one with the disc and is trying to avoid the Ferengi. Picard talks to her a bit and the Ferengi sees them together and believes Picard is her associate. She slips the disc into Picard's pocket. In his room Picard is approached by the carpet-wearing aliens, who are from the future and are looking for a legendary artifact that was stolen and sent back in time. They have records staying Picard will find it on Risa, he agrees to return it to them if he finds it. 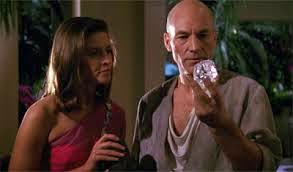 Picard gets pulled into a treasure hunt. Vash, the Ferengi and the time travelling aliens all want the McGuffin. The disc contains research from an academic Vash may have worked with, pinpointing its location. She and Picard set out to find it in some caves. They get friendlier and whilst camping have sex (one assumes). The Ferengi catches up to them in the morning and makes them dig for the McGuffin. Then the future-aliens arrive to claim it. It turns out that neither Picard nor Vash have been completely honest with each other. They dig for ages but can't find it, it must be lost and the future-records are wrong.
Picard prepares to leave but visits Vash before he does. He reckons she found the McGuffin a while ago and concocted the whole hunt to throw everyone else off the scent. She reveals it's hidden in a Horgon. The time-travelling aliens arrive, but there's doubt that they're the rightful owners. Picard, having planned for this, gets the Enterprise to destroy it using the transporter. Vash and Picard say their goodbyes and Picard returns to the ship. 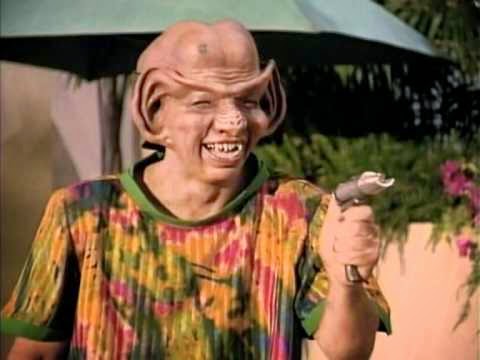 The Ferengi is played by Max Grodenchik, who plays Rom in Deep Space 9. When they use Ferengi actors (well Max Grodenchik and Armin Shimmerman mostly) I can tell it's the same actor. In this case the character is different enough that I didn't sense any resemblance to Rom. Of course this Ferengi is unlikeable (as per the TNG policy on Ferengi). Really it's a testament to the characterisation on DS9 that a race designed to be sneaky, greedy and often creepy are characters you care about. I believe this is the first time we see Ferengi misogyny in action. I don't think there had been any Ferengis and women on screen together in Star Trek up to this point. I had the uncomfortable feeling, based on the mannerisms, that there was also an unpleasant stereotype going on here. I guess it works in a villain. 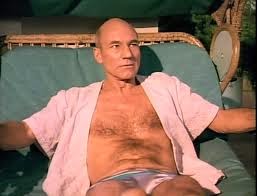 Picard's grumpiness is worse than ever, as is his stubbornness when people badger him to take a holiday. Though it is irritating when everyone rejects your ideas for having fun and insists you do it their way. So what if Picard wants to attend lectures, do something cultural, or read? Personally that sounds like a pretty good holiday. When threatened with non-stop prodding, and the spectre of Lwxana Troi, Picard agrees to try somewhere relaxing instead of interesting.
I think this is the first time Picard has a love life on screen.We know he has exes, meaning that (unlike Kirk) the women he's been involved with survive, and have lives of their own. I guess Picard attracts a more successful type of love interest. In fact if your character is going to have episodic relationships this is a reasonable way to do it. They aren't always there cos they've got their own stuff going on and it's not a committed, codependent arrangement. More sincere than someone apparently being the love of your life then disappearing.*
The episode also plays into Picard's idea of himself as cultural, and the reality where he's unable to miss out on adventure. I was confused that Picard's love of archaeology didn't feature more prominently since it's an Indiana Jones type of story, and Picard really really likes old stuff. But as the McGuffin is from the future it probably doesn't interest him. Plus he's really the archeologist's love interest here.

Riker: adventurer, lover, middle-management ...and prankster
Picard usurps Riker's normal role here by fulfilling two of the above descriptors (while still being senior management). Picard is never actually like Riker in the episode, even if he's got the kind of plot Riker usually gets.
Riker is very familiar with Risa, and the Horgon system. He goes on and on about the women of Risa. To the point where Troi (who is a very easy going ex) suggests he's been going on about these women more than necessary. Apparently in Riker's world sex is a mandatory holiday activity. Riker pranks Picard, first by suggesting Risa at all, and second by tricking him into getting a Horgon. As it turns out Picard can get women all by himself... as long as there's camping involved.

Doctor Doctor
Beverly obviously enjoys having the power to order Picard to do things, but she's too professional to do that. Or maybe it's because she knows he'll resent it and be super grumpy.

Klingon Warrior
Worf wants to send a security officer with the Captain. Seems a little over the top, but suggesting this sort of thing is Worf's job. This is another time when no one listens to Worf's security concerns, and yet again they turn out to be valid. As we will discover in DS9 Worf really doesn't get Risa, though his presence there does highlight the need for security. 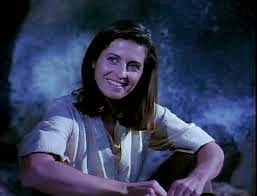 Vash and the Crystal McGuffin
Vash is basically a female Indiana Jones. Making Picard one of those women who turn up, help out and then returns to their own lives, while the protagonist is off having more adventures. Of course being male and the main character Picard is allowed to be much more competent and useful, plus we see his viewpoint.
Certain types of film have taught me that if you go off on an unexpected adventure with a stranger, and you don't quite trust them, then you have to sleep with them (unless you both work in law enforcement). So I guess this episode is fully compliant with the standard convention.

Transporter Magic
So the transporters can make things explode if certain setting are used and prepped in advance. That seems useful, perhaps it'd be worth remembering.

Future Fashion
The costume designers were issued a challenge, how short can you make a mini dress so that it'll cover all of the buttocks but none of the legs? They flirt with that line quite a bit in Risa. Though they had the same challenge with Picard's shirt. 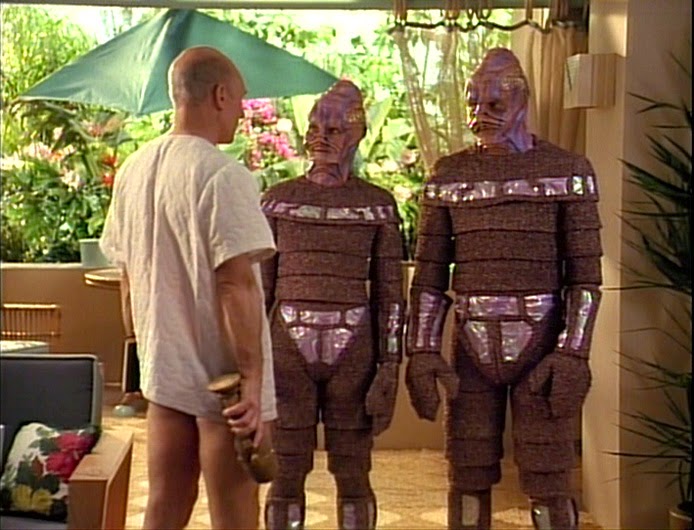 As seen above the time travelling aliens are overdressed, apparently wearing layers of glittery carpet. Perhaps they are from a more modest/cooler time?

Even in the 24th century jodhpurs are de rigeur for archaeological-type adventures. 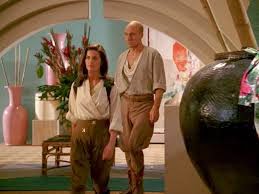 The End
Picard returns to the Enterprise. Gives Riker the Horgon and threatens to have a chat with him about it. Troi asks if it was relaxing and Riker is happily smug that Picard had a good time. There's no real joke here, it's lighthearted but not cheesy, and a little pointless. 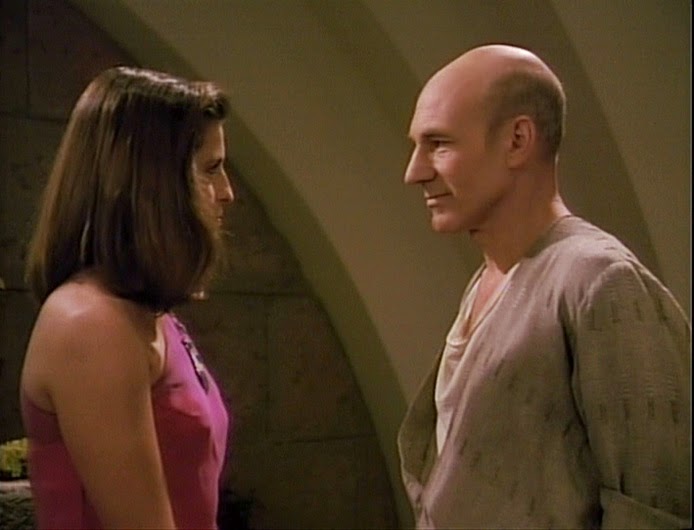 *Did Kirk airlock all those girls or disintegrate them?
Posted by Catherine Hill at 22:06