This solid episode makes me feel better about Geordi and confirms my good feelings about Crusher, though it could've benefitted from better effects. 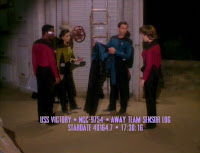 Five years ago Geordi and colleagues from his previous ship investigated a mysteriously abandoned Federation site on a planet. They never found out what happened and recently three members of that old away team have left their usual lives to return to the planet. Geordi's old friend and colleague Susanna has come to the Enterprise to brief senior staff about this, only she and Geordi are left and they fear something could happen to them next. The Enterprise catches up with a shuttle stolen by Geordi's former colleague Hickman. He doesn't respond to comms and they can't reach him before he crashes into the planet. Geordi and Susanna join a new away team down to the planet, they search around a shuttle abandoned by another former colleague. Susanna says she can sense the others and starts acting oddly in copse. Geordi takes her to sickbay on the Enterprise. 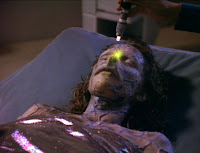 No one finds anything on the planet except some alien cells and odd footprints. Data tries to find matches in the system and Crusher observes that he's worried about his friend, though he denies it. Susanna seems to recover after her weird incident and is keen to solve the mystery. She and Geordi go over their old mission logs, then Susanna gets restless and light-sensitive and wants to go down to the planet. Geordi sees her fingers have started fusing together, so he takes her to sickbay again. Dr Crusher and her team monitor Susanna as she transforms and her skin reacts oddly to light. Geordi refuses to stay in sickbay and keeps going over the mission logs. He notices a creepy shadow and goes to the holodeck to figure out what cast it, but the Computer can't tell. Then Geordi, who has been ignoring symptoms, starts to transform. Meanwhile Crusher and her team have done detailed scans on Susanna and find something like a parasite that's changing her DNA to match its own, then they figure out how to get it out of her. Crusher tries to find Geordi but the Computer thinks he's not on the ship, even though there's no way he could leave. 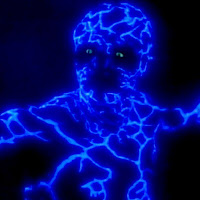 Geordi, now a transparent blur and undetectable by sensors, attacks a transporter operative and beams down to the planet. After Data creates a handheld UV device that can detect Geordi, an away team is sent after him. A recovering Susanna joins them, she says she's the only one that can find him because she knows what he's going through. Following Susanna's lead the away team track down Geordi and two other creatures who all glow blue under UV light. The other creatures -presumably the missing crewmembers- run away but Susanna calls out to Geordi and appeals to what is left of his humanity as his friend. After cowering away glowy Geordi reaches out to Susanna and embraces her before being returned to sickbay. After recovery Geordi reveals that he was almost lost and Picard says beacons will be put on the planet warning others away. 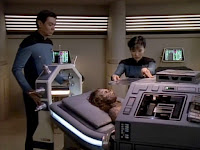 This is mostly a medical mystery, all the disappearing crew members had been cleared in bioscans and medical examinations, Susanna and Geordi both have scans and are fine just before their transformations. Crusher works with her team to restrain and examine Susanna. The first treatment they try doesn't work as it should (because medical mysteries follow the same principles as enginerring ones) and one of her deputies discovers that Susanna's skin now glows under light. They realise that her skin now has chameleon-like qualities and that's how Geordi is later able to escape detection. Crusher also reports that the Federation personnel on the planet didn't disappear, they just transformed into aliens. The sickbay team are able to remove the tiny alien thing and reverse the process while Susanna still has DNA that is unaffected.
Crusher sees that Data is worried for his friend and though he says it's not possible it's clear that she doesn't believe him. When Susanna starts transforming Crusher recommends Geordi is kept in sickbay for monitoring, he refuses and appeals to Picard. Crusher allows him to leave when he offers to set up Computer monitoring and she makes him promise to report any symptoms to her immediately, which he doesn't. It also seems that the Computer safeguards weren't put in place either, or the Computer should have alerted someone when it stopped being able to detect Geordi, rather than waiting until Crusher asked after him. Crusher asks whether the transformed people on the planet can communicate, no doubt thinking of helping more people.

Does Not Compute
Crusher observes that Data is worried about his best friend. Data immediately insists this isn't possible because he's an android. He claims that there's a risk to Star Fleet personnel and that's why he's strongly motivated to solve the mystery. Crusher doesn't believe that Data is only motivated by the First Law of Robotics, but she humours him. It's nice to see that Data's insistence on emotionless is being challenged without the show. Later when Geordi is furiously searching the old mission logs for an explanation Data offers assistance and suggests that Geordi should rest. While Geordi concedes this is a good idea he's tetchy and clearly too wired to sleep and brushes off Data's offer of help. While Data wasn't bothered by Geordi's grumpiness I think that Geordi dismissing his offer of assistance gets to Data just a bit. 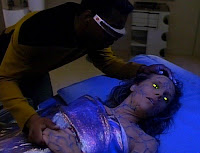 Geordi and Susanna obviously have a very good relationship and after she’s briefed the Enterprise crew they resume their friendship, chatting about what’s going on in their lives. He claims to be enjoying the bachelor life (yeah right) and she calls him ‘little brother’ and mentions giving him advice about women, did he fail to listen to her too? Underneath their cheerful conversation they’re both worried about what’s happened to the other, afraid that they’ll be next. Geordi takes Susanna to sickbay twice when she has odd symptoms, though he doesn’t show himself that kind of care. At the end it is Susanna’s voice that gets through to him and she hold him as they’re beamed to sickbay, mirroring what he did for her earlier in the episode. It is clear that Geordi does have good relationships with women, but it seems like he’s a bit dreadful when he’s attracted to someone (or at least he’s written like that sometimes). At the end it is Susanna's voice that brings Geordi back to himself because of the trust he has in her, even when he's almost lost himself.
Geordi is restless and can’t stand being kept in sickbay even though it’s what’s best. He appeals to Picard, who also wouldn’t want to be confined, to get permission to investigate. Like Susanna he’s desperate to solve the mystery, but he doesn’t want to work with anyone else. His discovery of the inexplicable shadow and the Computer’s inability to identify it are a little creepy, but as he transforms before he’s able to tell anyone about it his investigation doesn’t help solve the mystery at all.

Staff Meetings: 2
1. The opening footage from the old mission logs is being shown during a meeting where Susanna briefs the senior staff about the disappearances and Geordi expresses disbelief that any of his old colleagues would abscond.
2. In her office Crusher reports her findings about Susanna's altered cells  to Picard and Geordi. She says it seems unlikely the illness can be transmitted, but isn't sure what caused it and thinks Geordi will likely be afflicted next. Geordi asks the Captain to let him continue his investigation rather than being confined to sickbay and Crusher agrees but tells him to report any symptoms to her (which he doesn't).

Death by Space Misadventure
Forty nine people on the planet disappeared and then three of the people who investigated this disappearance later disappeared themselves. Technically most of these people didn't die (or at least not right away) they turned into glowy aliens with no trace of their old selves left. Except for Lieutenant Paul Hickman, who died crashing a stolen shuttle, probably because he didn't have proper hands anymore.

The End
Left together Geordi tells Susanna that even though he couldn't remember who she was he still trusted the sound of her voice. There's an element of melancholy, presumably for those who didn't survive what they went through. 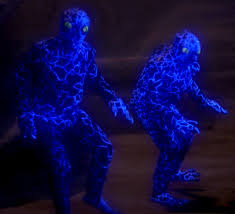