The Anxiety of Kalix the Werewolf

The Anxiety of Kalix the Werewolf
by Martin Millar 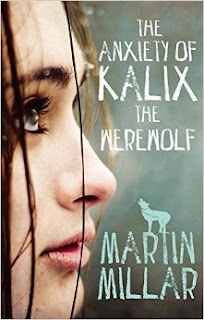 Kalix MacRinnalch is a Scottish Werewolf in London, dealing with her anxiety and addiction while living with her friends, two human students and an excitable fire elemental. The MacRinnalch werewolf clan are at war with the Avenaris Guild of werewolf hunters and after a devastating blow close to their ancestral home in the Highlands the London-based werewolves want to attack the Guild. While the werewolves are aided by fashion-obsessed, fire elemental Queen Malveria, the hunters have their own royal fire elemental ally.

This is the third book in a series, which started with Lonely Werewolf Girl and continued with Curse of the Wolf Girl, all are worth reading. The story has a complex plot that is drive by the varied needs, wants and motivations of the characters, but it all feels clear and easy to read. Most of what happens feels consistent and like a natural progression, so even the sillier aspects work well. The cast of characters increases, as it did in previous books, but somehow you know how they're all feeling and what they're all going through. It is writing in the best tradition of soap opera or multi-character TV drama, with a big cast at odds with each other and yet you can feel sympathy or at least understanding towards each. But with magic and action and humor. How Millar keeps this all working so well is a fascinating mystery to me.

The characters aren't ever just one thing. There are werewolves with mental health issues, addictions, ambitions and complex love-lives. There are royal fire elementals obsessed with fashion or anime. There are werewolf hunters who love their families but also plot destruction. There are human students who are just trying to cope with all the craziness and navigate their way through their own desires. There is a tapestry of different types of people with varied problems, flaws, interests and loves, some aren't neurotypical, some don't fall into traditional expectations of gender or relationship roles, a few are addicted to illegal substances or desperately obsessed with fashion and prestige. Just the sort of mixture of people who exist in reality but aren't often shown in fantasy fiction. These are all people who exist together with lives, problems, loves and feuds, and while they might insult each other or scheme or even become murderous, you never feel that the author condemns anyone for who they are and so it is easy to slip into the heads of characters who you, as a reader, may have little in common with.

Although some members of Yum Yum Sugary Snacks -the rock band fronted by werewolf twins- appear in this story there is less focus on them in this volume (but check of previous books to see more about Beauty and Delicious and their colourful hair). There is far more about the fashionable and war-like machinations of the regal Queen Malveria, her arch-rival Kabachetka (now an Empress), and Thrix MacRinnalch the werewolf Enchantress and fashion-designer. There's a caper at an elite charity ball, involving amateur models/spies/seducers that is one of the funnier things I have ever read. It's great how this book can be joyously hilarious but also deal with serious stuff. Kalix is in a much safer and more supportive place than she was in the last two books, more willing to try new things and keen to improve herself, but her issues continue because there's no magic fix for mental health problems. This is made even more clear when one of the more powerful characters struggles with her own mental health.

I really recommend this series, it's just so inventive and funny and full of empathy and oddness and action. This one had me laughing so much, in between feeling really strongly for the characters. I remember the previous volumes got me the same way. I'm kind of disappointed in myself to see that I must have read the last 2 volumes at times when I wasn't blogging.