Space is super weird as ever but we get to see everyone's fears and it's kind of creepy so the episode works well. 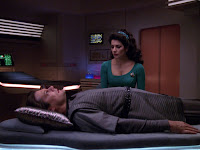 The Enterprise arrives in a binary star system where it finds another Federation ship that has been missing for a month. Troi senses something ominous but vague and insists on joining the away team. On the Brittain (which is pronounced like Bri-TANE, not like Britain) the away team finds the Bridge crew were killed in a variety of violent ways. Troi finds one man alive but catatonic and realises he's also Betazed. Crusher reports that 34 people are dead, the whole crew except the one survivor. Tori tries to communicate telepathically with him but his thoughts are jumbled and odd. She has ongoing nightmares about flying through swirly green smoke towards a couple of lights while voices whisper cryptically. Meanwhile the Brittain's engines won't work for no obvious reason. After a few days of moving bodies, doing autopsies and preparing the ship for towing it turns out that the crew all murdered each other and now the Enterprise can't move either. Plus people are starting to behave erratically and become paranoid.
Data and Geordi report that the ship is stuck in a rift, a rare but recorded phenomenon which sucks energy and strands the ship. This kind of rift can be escaped by creating an explosion, but the Enterprise doesn't have the right substances and lacks the power to make them. Mental faculties are being diminished all over so Picard tells Data, the only one not affected, to keep an eye on things and take over if needed. After Troi mentions she's having nightmares Crusher realises that no one else on board has been dreaming and the lack of REM sleep is causing an imbalance in the brain that she finds in the Brittain's crew. The crew experiences creepy hallucinations, become exhausted and forget what they're doing and how to do word...things. Data is left to fill in the blanks. 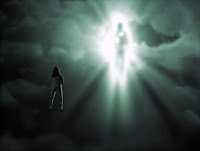 Despite being the only one who's dreaming Troi also looks knackered, but she hears the survivor think something from one of her nightmares and realises it's a message and he's been getting it too. She reports that she thinks there's a ship stuck on the other side of the rift and they're sending out telepathic messages asking for help to escape, which is disrupting the sleep of anyone who is't Betazed. She says she can send a short message in her dreams, while she and Data are looking at elements the Enterprise has she realises that "one moon circling" means hydrogen and they figure out that the message is asking for hydrogen to make an explosion to destroy the rift. Crusher puts Troi into REM sleep and she has two minutes to say they're ready. Data releases the hydrogen, using almost the last of the ship's power. It looks like Troi didn't succeed but then an explosion blasts theEnterprise and a shiny, blue rock (which is apparently a ship belonging to telepaths) free.

Oh Captain My Captain
Picard is terrified of frailty and mental infirmity, he fears losing control and his mental capacity. He remembers the deterioration of his grandfather with grief and fear. Picard hallucinates a doorbell but thinks it's a malfunction. He has a freak out in the lift and thinks the ceiling is coming for him (I think) and lies on ground yelling. Choosing Data to take control as needed is shrewd and after a while the android is completing his sentences. Even after Data is acting-Captain he tries to defer to Picard, but like a doddering king Picard is sat on his chair of office and can do little beside nod with bewilderment.

Does Not Compute
As the only one unaffected Data is soon vital to getting things done. He has to go around ship checking people's work and filling in the words they've lost like and efficient but caring butler who is desperately keen to keep things together. Soon he's anticipating orders and tries to make show of waiting for Picard, but in the end has to actually take control. He agrees with the plausibility of Troi's theory and helps her to the conclusion that they don't need to send a message to the other ship because they're the ones who're receiving the message. 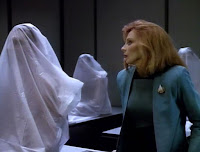 Crusher is the one who carries out the autopsies and figures out the horrendously violent ways these 34 people murdered one another, it's all ghastly but her composure is maintained. She and Troi are the ones that track the initial symptoms of erratic behaviour and paranoia among the Enterprise crew. When Troi mentions nightmares it's Crusher who realises that no one else has been dreaming and she samples of brains of the deceased to prove that's the cause of the problem. Crusher's freak out comes in the morgue (it may not always be a morgue, but it's being used to store bodies now) when the bodies from theBrittain sit up under their sheets* She screws her eyes shut and shouts at them to go away, which makes them behave. Even at the end when other crew members are barely functioning Crusher manages to put Deanna into REM. 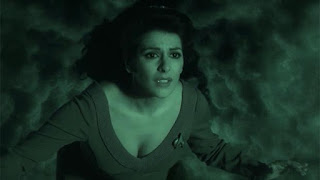 Troi tries to communicate with catatonic the Betazed and stays with him despite his unintelligible thoughts. She keeps having nightmares, confusing, scary and frustrating if a little cheesy-looking. She fears becoming catatonic like the man she found, though I suppose when the alternative is being killed in a murderous frenzy, so it's all swings and roundabouts. The overlap of phrases between the nightmares and the stream of consciousness from the survivor means she puts it all together. The "eyes in the dark" are the binary star system and "one moon circling" is the hydrogen the mysterious other ship needs. Troi knows how to lucid dream to send a short message, even though she takes a while to find the recipient instead of just shouting 'now'. Basically Troi totally saves the day here. 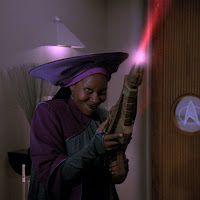 Guinan's Hat: Purple
When the jittery and paranoid crew members in Ten Forward are mouthing off against Picard Guinan disagrees with them. Then when this Gillespie guy starts a bar fight in Ten Forward by punching O'Brien, Guinan gets a massive gun from behind the bar and shoots it at the ceiling. She doesn't seem quite as knackered as everyone else, but is perhaps more manic (and shooty) than usual.

Random Crewmembers
A twitchy ensign heard things in the walls on the Brittain when he and Geordi were preparing to tow it.
The Bridge ensign who couldn't remember how to undock something or other to do with the ship that she normally can do.
That guy in Ten Forward (Gillespie) got paranoid that Picard was experimenting on the crew and then started a big fight in Ten Forward.


Staff Meetings: 5
1. Picard initially hallucinates the doorbell in his office, then Troi and Crusher have to knock. They tell Picard that they think the erratic behaviour and hallucinations reported in the Brittain's logs is happening on the Enterprise. Both women think the danger is in the location, but Picard isn't concerned because they're about to tow the other ship away.
2. After 10 days being stuck and not expecting rescue for 2 weeks Data reports that they're trapped in a particular type of rift, but they don't have the power to escape. Crusher and Troi ask about erratic behaviour and nightmares, but these symptoms have never been reported in these cases before, so that's still a mystery.
3. Data suggests using the deflector dish as they did against the Borg (it's the first suggestion and therefore won't work), Picard worries about mental frailty and orders Data to take charge if needed.
4. Crusher reports to Picard about lack of REM and how it's affecting the crew of the Enterprise and looks like that's what affected the crew of the Brittain.
5. Troi tells Data and Picard that she thinks they're being affected by telepathic messages from beings stuck the other side of the rift. Data says it's plausible and suggests sending a message back to coordinate escape attempts, which Troi says she can do.

Death by Space Misadventure
34 people died on the Brittain in a terrible episode of mass murder and suicide brought on by paranoia and delusion due to lack of REM sleep. We don't know what happens to the survivor, there's no suggestion of treating him so if he dies too then that's 35.

The End
Data's final order as acting-Captain is to send Picard and all personnel to bed. 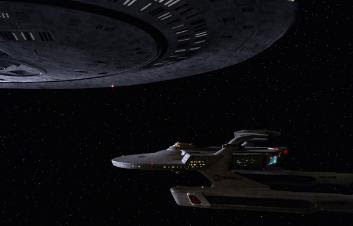 * Where do the sheets come from? The ship doesn't have enough power to replicate elements, so it probably can't make whole sheets. Are those from people's actual beds or is there a store of sheets to go with the morgue (if it usually is the morgue that is). Is there like a space linen cupboard. I have no idea why I'm so intrigued by this notion.
Posted by Catherine Hill at 12:42