ed. Helena Whitbread
Anne Lister is a fascinating figure. Born in 1791 she was a single woman who inherited a house & modest estate near Halifax in Yorkshire. She kept a detailed journal for most of her life, recording her thoughts, feelings and all that happened in both her public and private life. Anne's diary is intriguing because large sections were written in a secret code that she referred to as 'crypt hand' and for a long time the contents of these passages were kept secret. These sections contained details of Anne's various relationships with other women. Her diaries were not only an account of life in the Regency period, but gave details of a rarely glimpsed world of lesbianism.

This book collects Anne's diaries from 1816 to 1824. During this time she lived at Shibden Hall with her unmarried aunt and uncle. Anne had a few lovers, and more infatuations, during this period. The main one was a woman who had married an older man for the security he provided, but still kept up a relationship with Anne and promised that they would be together when her husband died. It is clear that this arrangement caused Anne a lot of insecurity and unhappiness.
Anne was an independent sort of woman, in a time when such independence was unusual for women. She had clearly decided that she would never marry or be involved with men, but she did long for a partner and companion to share her life with. She was a woman who valued education and as well as learning languages and attending lectures she was an avid reader.
At times I found it hard to identify with Anne, a woman who held such different values and lived such a different life to my own.  However there were times when her feelings are expressed so strongly it is difficult not to empathise with her. The passage that struck me most was where she described how writing her journal and reading books relieves her worries.

"O books! books! I owe you much. Ye are my spirit's oil without which, its own friction against itself would wear it out."
This is a sentiment I can very much agree with, even if I wouldn't put it that way.

I can very much understand the value of these diaries to Regency history, women's history and lesbian history. I have no particular interest in Regency England and know only bits and pieces about the period, but that didn't cause me much of a problem as this is someone writing about their life rather than their times, and the explanatory notes provided by the editor are helpful without being intrusive. 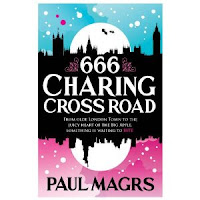 Being a fan of the Brenda & Effie series I was interested to see what Paul Magrs newest book would be like. It's not a part of that series, but sounded like it covered similar themes.
The strength of the story is in the characters. They're mostly ordinary (or seemingly ordinary) people with mundane concerns who encounter the occult and must deal with it as best they can. Shelley and Jack are regular New Yorkers who get dragged into demonic business by their boyfriends. Liza appears to be an eccentric old bibliophile, but she knows more about spooky stuff than she lets one, not that this stops her from making some pretty catastrophic mistakes. Even the antagonist Daniel can be understood to an extent, thought he's not particularly likeable even before he gets possessed.
The writing style felt very similar to the later Brenda and Effie books. It's an informal style that has a lot of the characters thoughts and preoccupations laid out on the page. It means that you always know what emotional state the viewpoint character is in and feel close to them quite quickly, even if you don't agree with them. Some of the writing feels like it's telling rather than showing (which is generally a cardinal sin for a writer) but the way the points of view are done means that though you are being told one thing, you are also being shown something else.
666 Charing Cross Road is definitely more of a horror story than the Whitby-based books. The plot features a single major threat and plays out across a few months, with the character's lives being increasingly taken over (and lost) to the danger. In this way it felt more like a film than the more playful, complex Brenda and Effie series, which at times has the feel of an sketch show.
I enjoyed 666 Charing Cross Road and I'm keen to read more about these characters if further titles come out, though at the moment I still prefer Brenda and Effie.
Posted by Catherine Hill at 12:33