My Week with Marilyn by Colin Clark 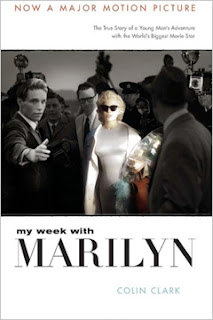 I saw and enjoyed the film and intended to have a look at the book. Within two weeks it was in my hands as I was replacing non-fiction at work. I took this as a sign and issued it to myself that very day.
The book is in two parts, the first is the diary of Colin Clark, a 23 year-old wannabe filmmaker, and 3rd Assistant Director on The Prince and the Showgirl. This part was published in 1995 as The Prince, the Showgirl and Me and gives a lot of insight into the personalities and problems behind the making of the film. The second, eponymous part (first published in 2000) is about a week that he spent as friend and confidante to Marilyn Munroe, the most famous woman in the world.
The film cut quite a lot and swapped some parts around, but it was fairly faithful to the book. It is the diary of an upper class Englishman from a bohemian (for 1950s Britain) background getting his first glimpse of the film industry.

In his preface Clarke says he couldn't be further from the 'country set' that made up his school fellows. Initially I found this statement ridiculous, but I suppose that he probably was as far from that group as any white, wealthy, upper-class, Eaton-educated Englishman could be. I think the point is that Colin had a very different outlook on life than those who would be considered his peers. His father was friends with Sir Laurence Olivier and that was how Colin got his very humble position on the film.
What I did not expect, and therefore found interesting, was what I learned about the 1950s. Nowadays it is a decade much referred to (especially this long weekend in the UK), but often in terms of austerity and restraint. Being a personal diary there were various intimate details and it felt odd to be reading stuff like that (I'm pretty un-voyeuristic) recorded so frankly.
It was also a glimpse of the kind of things that were common enough behind closed doors, but don't represent the modern idea of the 1950s. Not only sexual stuff, though there was some of that, but also swearing, drug taking, and the commonness of marital infidelity. It was also interesting to see the culture clash between the American movie-makers and the British film industry, which had strong links to the theatre (especially this production which was based on a play and involved any stage actors). The world of film is obviously apart from everyday life and not anywhere near as glamorous as the industry would have us believe, then or now.
The differences in tone between the two parts was very striking. I suppose the first was meant as a behind-the-scenes view of the filming, whereas the second is very much a personal account. It does make you wonder how much editing Colin did before publication. The events of the second book were concealed in the first, dates were changed and Colin displays no difference in tone or sympathy towards Munroe despite the changes that must have taken place.
I'm now quite interested to see The Prince and the Showgirl. Having read how difficult it was to make I'm, curious about the finished product.


Servant of the Underworld by Aliette de Bodard 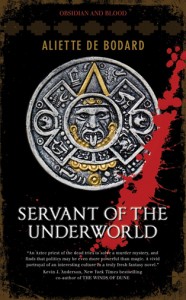 This fantasy murder mystery is set in the Aztec Empire. High Priest of the Dead Acatl is called to investigate the death of an ambitious priestess, the main suspect is his brother, an elite warrior. Acatl, an unambitious man who has been thrust into a high-profile role, investigates to prove his estranged brother's innocence, but uncovers other secrets that could tear his family apart.
I very much enjoyed this book. I've read some of the author's short fiction in Interzone and was very impressed by it. I knew it had an Aztec setting and wasn't sure quite what to expect, I did Aztecs in school when I was 10, but it's an area and a period I know little about, so it was interesting to read about. There are all sorts of little details throughout that gave a good idea of how life was lived. The short stories I've read were set in an alternate-future with Aztec and Chinese empires in space, so I think I was initially expecting something more science fictional. I soon got into the historical in setting, and was interested to read about the magic wielded by priests and gods. I don't know Aztec myths, so I can't comment on that side of things, but the rules and magic all seemed consistent and worked with the setting. There was a good bibliography at the back of the book, and I recently got a free book about Mesoamerican art I shall look through.
The book is told from first person point of view by Acatl, who is a dedicated, honest man, but not a go-getter and weighed down with familial regrets and some resentment towards his successful brother. I found him to be mostly sympathetic, though there were occasions when you could see why his sister and deputy were so fed up with him. I found various of his character flaws familiar, so I identified with him more than some of the more action-based characters that can be found in the genre.
The only part of the book I found difficult were the names, which I didn't always know how to pronounce. However this wasn't really a problem as I'm not talking about the book out loud. Although I was curious about the sounds I'm actually glad there wasn't anything like a pronunciation guide. When I've read those in books before (including The Dervish House) I've fond they can be more distracting than helpful.