Do the Creepy Thing by Graham Joyce 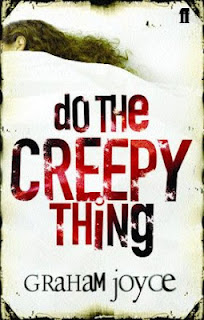 Caz and her friend Lucy like to break into people's homes at night to do the creepy thing. Doing a Creepy means holding your head just centimetres away from a sleeper's face for 15 seconds. It's a game that's played as a test of skill and for the rush of possibly getting caught. Then Caz wakes up a strange, old lady who claps a silver bracelet on her wrist. Things start going wrong for Caz as she's plagued by bad luck and followed by a terrifying apparition.

This is an excellent story, which defied my initial expectations in an interesting way. It felt very realistic and grounded to me, despite having definite supernatural content. Both the setting and characters felt authentic, like these were things happening to normal people, not characters from a book. This might be because it's a UK book, whereas quite a lot of the YA I read is set in the US, although I think it says more about the authors grasp on his characters and honesty about their lives. There were a few elements in the book that could be described as 'issues', especially involving Caz's mum and her friend Lucy, but they weren't written like that at all. They were dealt with in a present-but-mostly-unmentioned kind of way, which is realistic even if it's not ideal. I thought that part of the ending was a bit too neat, but was happy to be surprised by the direction the story went.
Posted by Catherine Hill at 19:37