A Matter of Honour

What Happens
It's time for the Starfleet Exchange Programme. (Did you know this was a thing? I did not.) Admittedly no one is actually exchanged. Also it turns out that it's not limited to Starfleet. But it's certainly a programme of some kind.
The Enterprise receives an Ensign from a Benzite Federation ship, but hasn't sent any crew members anywhere. Picard and Riker discuss this over a holodeck shooting game (see Staff Meetings) and Riker is sent to a Klingon ship.

Ensign Mendon (Benzite)
Mendon beams onto the Enterprise for his exchange placement. After being greeted by the First Officer, a young acting-Ensign assumes he is a different Benzite and talks to him as though they've met before. He's confused Mendon with some guy called Mordoc, who was admitted to the Academy the previous year. Mendon accepts this, being from the same geostructure it makes sense that they'd look alike. He's not offended, just confused, when the acting-Ensign asks how they tell each other apart, which some might find tactless or insulting. 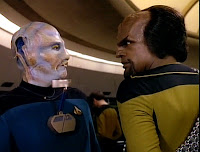 Mendon walks around the ship politely offering to make systems more efficient. The reception to his help is lukewarm. On the Bridge he makes a comment about Klingon hospitality to the nearby Security Chief, who doesn't take kindly to it, probably because he's a Klingon himself. Ooops. Mendon runs a scan of a Klingon ship and finds an unknown, microscopic organism on it. Further scanning fails to identify it and so, following proper Benzite regulations, he runs a full analysis in order to find a resolution before reporting to senior crew. Mendon introduces himself to Captain Picard, who seems surprised to be addressed and isn't particularly interested in hearing about improving efficiency. He suggests that Mendon report to Lieutenant Worf, who continues to be fearsome. 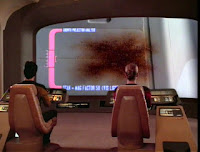 A mysterious, bacterial substance is found on the Enterprise, it seems to be the same as the stuff on the Klingon ship, and it's gradually eating into the hull. Mendon mentions that's probably where it came from and gets told off by the Captain for not reporting it earlier. It seems that on this ship the crew report things before they've run a full analysis and have a solution, it's a different way of doing things. The Captain instructs him to finish his analysis and report what the damage will be to the Enterprise and the Klingon ship. Despite the problems it's causing, the Captain seems interested in the possibility of a new life form. Mendon's report states that the Klingon ship will be worse as it has more of the bacteria on its hull, there's likely to be a breach already. The Enterprise goes to intercept the Klingon ship and warn them.

As he's working to find a solution Mendon is interrupted by acting-Ensign Crusher, who tries to reassure the Benzite that he has not failed and is not to blame. Picard may be angry, but he understands that errors happen. Mendon appreciates this, though he doesn't understand why Wesley is being nice and making friends with him. He realises he still has a chance to prove himself and becomes more determined. Once his analysis is finish he finds out how to stop the micro-organism and reports his solution to the Captain. 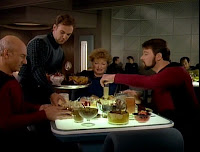 Lieutenant Riker (Human)
After volunteering/agreeing to go to the Klingon ship Riker makes preparations. He asks for Worf's advice and learns about the importance of assassination in Klingon hierarchy. Worf gives Riker a personal locator signal to be used in an emergency. Riker samples various Klingon foods, which are bought to him by one the the Enterprise's rarely seen waiters. Picard is glad Riker is going because they "know so little about them." Worf is not there for this conversation. Riker is looking forward to the challenge.  I assume that Klingon ships involve less paperwork* 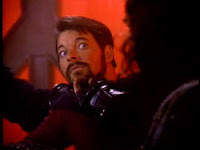 The decor of the Pagh is shadowy with red lighting. The Klingon Captain demands to know where Riker's loyalties are and the 2nd Officer accuses him of lying when Riker says he'll serve the Captain and the Pagh. Riker takes the suspicious Klingon by surprise and knocks him down, thus cementing his status as 1st Officer. Riker states his intentions as an officer, then claims that's the same as an oath of loyalty.
In the mess Riker eats with the crew and exchanges bawdy jokes. The female crew members aren't attracted to Riker, but they're curious about whether he can handle Klingon women. Curiosity sex: probably better than pity. Neither Riker nor the Klingons were expecting the other to have a sense of humour and they're surprised they can laugh together (Worf's grumpiness is obviously just him). Though differences are highlighted in the way they treat the elderly.
Riker is called to the Bridge, a hull breach has been discovered. It's not serious yet, but at the rate the hull's being eaten away it soon will be. The Captain believes the Enterprise did this, he knows they focused a scan on the area where the hole is. Riker tries to argue that they wouldn't, but the Captain decides to attack the Enterprise and cloaks in preparation. 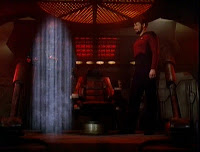 The 2nd Officer doesn't think Riker is involved and nearly convinces the Captain of this, however when they realise the Enterprise is heading towards them the Captain is convinced it's intentions are hostile. Riker is asked to give information about the Enterprise's weak points. He refuses, he says he's under two oaths. He'll do what's best for the Pagh, even fighting and dying, but he won't betray Federation secrets. Riker turns on the emergency locator Worf gave him, the Captain snatches it away from him. Using the signal the Enterprise unwittingly beams the Klingon Captain onto the Bridge, where Worf has to stun him. Meanwhile Riker takes over the Klingon ship, asks Picard to surrender (which he does**) and then allows the Enterprise to make the repairs they'd been offering. Riker hands the Pagh back to the original Captain then returns to the Enterprise after the shortest exchange ever. 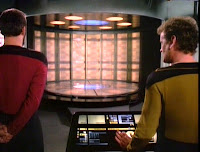 O'Brien wishes Riker luck and says that he'd be too afraid. O'Brien is really selling himself short here.
This is the same Miles O'Brien who'll be arrested by the Cardassians and survive, who'll get captured by the Jem'Hadar, who'll defeat an entity possessing his wife, who'll actually masquerade as a Klingon in order to go undercover among them, and who'll be involved in a variety of other dangerous missions and combat situations.
Now I want to watch DS9. 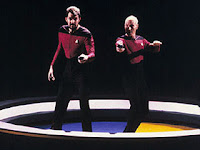 This staff meeting has been cunningly disguised to look like fun. The dialogue is the usual stuff, but the viewer is distracted by shiny lights as Picard and Riker play a target practice, shooting game in the holodeck.
Picard tells Riker that it's been suggested that an Enterprise officer take part in the exchange programme. Then he mentions that there's a Klingon ship near by and that a Federation officer has never served aboard one. I assume he's purposefully getting Riker interested, but his manipulation is fairly subtle.


The End
Riker thanks Worf for the locator, praises Klingons then says he's glad Worf is there. Worf welcomes Riker home. It's not as mawkish as it sounds and is far more effective than episodes that try to be funny right at the end.


* Or 80s-looking-iPad-work, which is the future equivalent of paper work.
** I guess surrender doesn't count when it's between friends.
Posted by Catherine Hill at 15:36