Wesley falls in love and it's nowhere near as saccharine or nauseating as I feared.
Not quite sure about the episode title; it's a French term for the heir to the throne, but it's also masculine. It must be referring to Salia, but then I would've thought it should be "Dauphine". 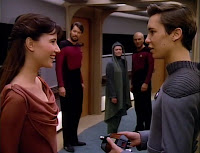 The Enterprise goes to a very foggy planet to collect Salia, a young head of state, and transport her to the war torn planet she will rule. She's accompanied by Anya, her very protective guardian. Salia and Wesley are attracted to each other, but Anya warns the young ruler that she must focus on bringing peace to the homeworld she barely knows. According to Data's infodumps, Salia's parents are from the two warring sides in a civil war and were killed when she was an infant. The idea seems to be that she can unite the two very different groups, but since one lives in darkness and the other lives in light I'm not sure how that would even work.* Wesley is confused and goes around asking advice from senior crewmembers, this would be inappropriate were it not for the fact that various male crewmembers made a pact to raise him as their own, or something.**
Anya goes around the ship criticising things, she claims the engines aren't working well enough. She turns out
to be shapeshifter who can take on various forms, and turns into a big, ferocious creature whenever she thinks Salia might be at risk. The guardian is locked in the brig after threatening to kill one of Dr Pulaski's patients, lest he pass infection to Salia. Picard asks Wesley to stay away from Salia for the good of the ship, but the young woman goes to see him. When Anya finds them together she goes growly again, but Salia shields Wes by turning into a big-furry-thing-with-claws too. Wesley gets upset about her being a shapeshifter and not telling him, but they part on good terms. She says she wants him to remember her human shape, but lets him see her true form, which is basically shiny energy (not bug-eyed and furry).

Riker: lover, adventurer, middle-management
After being sent away by Geordi, mildly alarmed by Worf and scienced at by Data, Wesley asks Riker for
advice on talking to girls. It took him long enough. As they're in 10 Forward Riker invites Guinan to help. Riker and Guinan flirt with smooth, eloquent intensity, ignoring Wesley's attempts to interrupt. It's both hilarious and weird. Wesley is confused and freaked out (which isn't surprising) and leaves after Guinan tells him to shut up.

Does Not Compute
Data talks to Wesley about biological compatibility and cell membranes after he overhears Worf giving Wesley advice about mating rituals. Wesley is unimpressed by Data's scientific approach.

Klingon Warrior
After being sent away by Geordi Wesley asks Worf for advice. Klingon flirting seems to involve roaring and clawing from the women, and poetry and ducking from the men. It is clearly too hardcore for Wes, so Worf suggests he begs like humans do.

Blind Engineering
Wesley is working for Geordi and should be fetching a magnet when he sees Salia and goes to his quarters to preen in front of a mirror instead. Geordi summons Wesley back using comms and finds that he's too distracted to be of any help. When Geordi discovers Wes is thinking about a girl he sends him away because his glands are full of hormones, which means he can't be useful. Instead of leaving, Wesley quizzes Geordi about exactly what he should say to Salia. Geordi's advises Wes to introduce himself, but he quickly has to tell the kid to talk to someone else. As Chief Engineer he's busy doing whatever it is with the engines, which is no doubt very important and probably nothing to do with ending the conversation (not that anyone could blame him).

Counsellor Pointless
Troi senses something odd about the women visiting the ship. Not that they're impostors, but they aren't quite what they say they are. This is yet another situation where Troi's powers are of little use. No one can do anything to act on her vague suggestion.

Young Love
Wesley and Salia spot each other in a corridor and briefly talk about magnets before Anya intervenes. Then
he goes to see Salia and has absolutely nothing to say to the security officer guarding her door. It's a good thing she comes to the door with a reason for him to come in, otherwise he probably would have bolted.

They talk about the different places Wesley has been, and Salia has only ever read about. I guess Wesley is well-travelled and worldly (quadrantly? galaxyly?). He says she should see other places and takes her to the holodeck to show her various amazing places. He talks hopefully about her seeing other places, but she is wistful because she knows her path is already set. It's actually a pretty effective scene; it looks good, plus the dialogue is simple and honest and it doesn't get bogged down in sentiment.
The pair eat chocolate in 10 Forward and Wesley notices Salia's mixed feelings. She explains that she was isolated before and spending time with him has made her sad because she knows she'll have less freedom in the future. Wesley suggests she stays on the Enterprise (as though that is in any way an option), but she gets upset and leaves. Guinan suggests Wesley go after her. In the corridor Salia is distressed because she knows she can't stay and Wesley tries to insist she can. They are interrupted by Anya and Picard who sternly separate them. Picard tells Wesley that Anya is a dangerous shapeshifter and that he should stay away from Salia for the safety of the ship. 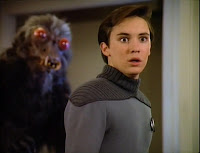 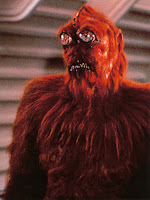 Salia sneaks to Wesley's quarters, and he expresses reservations but is clearly happy see her. They kiss and it's actually fairly sweet. They're interrupted by Anya in full creature mode. Salia tells Wes to run, he calls for security. Anya doesn't back down, so Salia turns into a big furry whatsit too. Wesley runs.
Before she leaves Salia visits Wesley. He's angry and accuses her of 'playing humanoid'. She apologises for hurting him, she didn't mean to. They both talk of love (which seems a bit premature, but this is how these things work on TV), but Wesley refuses to accept her apology. Just before she leaves Wesley gives Salia some chocolate to remember him by. 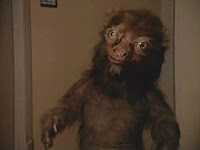 Worf and Anya are both warriors and both strongly bound by their duty to protect. Even though they wrestle and Worf has to put her in brig, they clearly respect each other. There are times when Worf and Anya exchange hard talk and gazes. I got the feeling that Worf wasn't being careful about poking the bear.
After Anya eludes her guards using her abilities they have to seal her quarters with a forcefield. This is actually a fairly sensible precaution.

Staff Meetings: 2
1. Picard and Troi discuss the situation with Anya and how dangerous she is. Troi senses that on an emotional level Anya is Salia's mother
2. Picard calls Wes to his ready room and explains about Anya being a shapeshifter. The Captain doesn't want to involve himself in personal matters, but for the safety of the ship he asks Wesley not to see Salia. Wesley agrees.

The End
After Salia's gone Wesley sits moodily in 10 Forward. Guinan offers him some understanding words about loss. 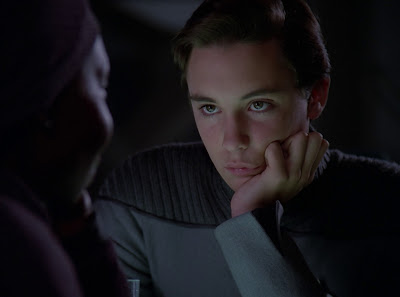 * For the purpose of this episode what Salia has to do and how she'll do it are of little importance. The focus is the situation she's in and how she feels.
** A situation which could be exploited for far more comedy value.
Posted by Catherine Hill at 16:36