What Happens
The Enterprise is the first ship to enter a system with some violent geology. Picard and Troi go to the holodeck so Picard can go horse riding. Riker calls Picard to the Bridge because a once-thriving planet is now barren.
At a staff meeting Riker discusses putting Wesley in charge of the geological survey. Wesley is told to
assemble a team, which is daunting because everyone is older and more qualified than him. He has issues giving commands at first but gets a fair bit of advice.

While Data is pursuing his hobby of checking for unusual scans he finds an unusual scan that turns out to be communication from a lifeform. Data interrupts Picard in another riding session to reveal that he has been in regular communication with a young girl from one of the planets in the system, though he was careful not to give details about himself or where he was from. He's concerned because his friend's planet has bad volcanic activity like others in the system. Picard calls a meeting to discuss the situation, much discussion ensues.
Later Wesley's team reveal the cause of the geological problem has been found. It's something to do with crystals, of the planet-destroying, non-healing variety. They think they can reverse the process and Data is told he can contact his little friend again. Worf and a geologist from Wesley's team work on torpedoes, of the non-destructive, planet-healing variety.
Data beams down to ensure his friend's safety. The girl seems weirdly unperturbed by seeing Data, who must 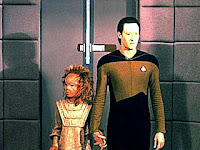 be unlike anyone/anything she's seen before. Data beams her back to the ship because the volcanic wasteland where she lives is unsafe. Data takes the girl to the Bridge and she watches as her planet is healed. Picard tells Pulaski to erase the child's memory, explaining to Data that it's for her sake too.
Data returns the girl to her home and leaves her a singing stone as a sneaky souvenir. Riker congratulates Wesley and invites him to sit in the Captain's chair, but Wes refuses. 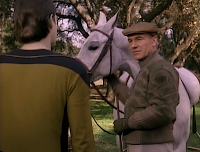 Picard starts the episode by going horse riding in the holodeck, while Troi tags along to watch. He's interrupted before he can start riding, but not before he's given a mini lecture on horses and his feelings for them.
Picard has actually gotten as far as riding the holo-horse when Data tells him about what he's been doing. Picard would have every right to have Data punished, however the Captain raises the issue with senior crew and holds discussion about the best course of action. He shows a flexibility that may not be what Starfleet Command would approve of, but is one of the major things that makes him a sympathetic character.
When Data brings the little girl on the Bridge Picard can't look at either of them and communicaties through Riker. We all know how kids freak Picard out, he hates children being on his Bridge, even when there isn't a massive regulation breach involved.

Fringlish
"In for a penny in for pound" says Picard as he grudgingly agrees to Data beaming down onto the girl's planet. I have to say it's a very English expression, though I don't know whether there's an equivalent French saying. 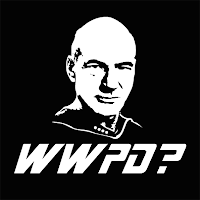 Riker: lover, adventurer, middle-management
Wesley's education seems deeply important to Riker, who convinces Picard to put him in charge of an actual mission. I do wonder how often this happens. Do all the kids on the ship get to do this? Or is it just because the senior staff are effectively raising/supervising Wesley as a loose collective? It seems like an opportunity that a lot of budding cadets would love.
Riker really mentors Wesley, providing him with advice whenever he asks for it and guiding him through how to choose a team and how to give instructions. Though his main advice seems to be: WWPD? (What would Picard do?) 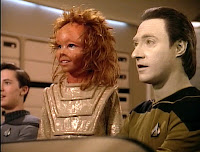 Data discovers the little girl's transmissions because he has a hobby of scanning for unusual signals, that presumably qualifies as fun for androids. What's remarkable is that not only does Data not report the communication signal, he actually answers back and ends up making friends with a child. 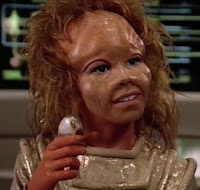 Data is careful not to let the girl know who or where he is, showing an awareness of the rules and how to bend them. He only reveals what he's been doing when he realises that his friend is in danger. Data advocates taking action to save her and clearly has an emotional connection. When Pulaski advocates saving the girl she is told she is being emotional, which means Data must be too.
Data's concern for the girl is clear when he asks whether he can beam down to ensure her safety, shattering the Prime Directive into tiny pieces. When she's in danger he beams her up to the ship, grinding the broken pieces of the Prime Directive into the ground. The girl manages to be fairly calm while impossibly watching her planet from way up in the sky.
Whilst the girl is in the sickbay, before her memories are wiped, she's interested in Pulaski's singing stone. It turns out that the stone doesn't work for Data because he's a machine, which isn't explored but is kinda interesting.

Poor O'Brien
When Riker takes Data down the transporter bay to beam onto the planet he instructs O'Brien to take a nap so he won't be involved. Despite this Riker then asks O'Brien to ensure that Data is beamed back in 10 minutes, meaning he is definitely involved. When Data requests two to beam up O'Brien does it but comments that "there's going to be hell to pay".

Since the first series Wesley seems to have learned some humility, which makes him less insufferable. Possibly he's matured, possibly he's less sure of himself without his mother around. Either way, Wesley's uncertainty about what to do in a leadership role and how to deal with people older and more experienced than him makes him more sympathetic. At least, I can sympathise with someone feeling out of their depth. He confesses his nerves about leadership to Pulaski. He interrupts Riker while he's chatting with a lady in the bar to ask his advice, even though it's clear that he feels awkward about doing so.
When Wesley asks geologists to do extra tests they tell him he's fussing. Later when he's considered WWPD and asks them again they have no problem, which suggests to me that they were just stalling because they had plans when he first asked. Predictably it's those extra tests that save the day (obviously the show can't fully get rid of the Mary-Sue vibe). When briefing the Captain Wesley is businesslike and doesn't smugly gloat, which is a definite improvement.
The real indicator is that Riker offers Wesley a chance to sit in Picard's chair, but Wes refuses. He says he's not qualified yet, which shows he's taking his position on the ship seriously.


The Prime Directive is a Harsh Mistress
...unless there's a sad kid in danger. Then all bets are off, it seems. 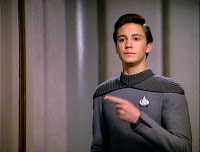 Staff Meetings: 3
1. Riker asks Picard, Pulaski, Geordi and Troi for opinions on putting Wesley in charge of the planetary survey mission. Pulaski points out he's a young man, not an officer in training and they shouldn't push him too hard. Picard approves of testing him and giving him command experience. Wesley is called in and told about his assignment, everyone is very formal with him. Picard tells Wesley that the officers are there to guide him and it's better to ask than blunder blindly through pride. 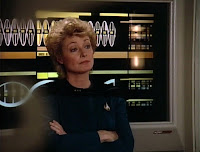 2. Picard invites Riker, Worf, Geordi and Troi to his quarters to discuss Data's illicit communications. Picard starts by staying Data was wrong, but they need to decide what to do next and not cast blame. Worf sees the Prime Directive as absolute so there are no options, Picard dislikes that rigidity. There's much discussion about playing god and deciding when interfere. Picards the point that if they interfere now why shouldn't they always interfere when anyone's in trouble. Pulaski takes the humanitarian view that they should save lives if they can, and because it means something to Data. Worf is scornful of this attitude. Data points out that they are also required to help those how request help, but it's all just discussion. Picard commands Data to cease all communication, allowing the girl to die. Then the Captain hears the lonely little girl searching for her friend and changes his made.

3. Wesley and two of the geologists on his team brief Riker and Picard on their findings. They've found the problem and will work on fixing it. The survey team leaves. Riker and Picard discuss Data, who has been monitoring his friend's planet. Neither like the idea of letting the girl die, nor do they like what they have to do to save her.

The End
Data apologises to Picard again. Picard reflects on friendship and says Data has taken a step closer to understanding humanity.
Personally I think he's taken a giant leap. 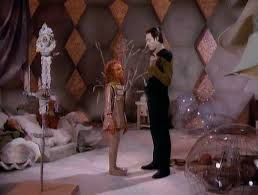