The Road to Bedlam

The Road to Bedlam
Mike Shevdon 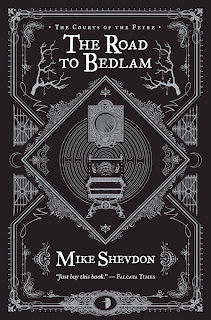 I got this book at Fantasycon 2012, in fact I got very the last copy they had at the Angry Robot stand. The book itself sustained some damage as I returned home from Fantasycon and was caught in a rainstorm (stupid wet Birmingham). Luckily, after some care from my husband, the book survived totally readable and only a little warped along the edges. In fact the slight wobble on parts of the cover and some of the pages gave the book a slightly 'aged' look and added a tactile element that goes well with fantasy that's steeped in myth and features long-lived characters. Not that I will be purposefully 'aging' my own (or any other) books. To do so would be a sin.

Anyway... this review will contain spoilers for Sixty One Nails, the first book in the series.

The story continues from the previous novel Sixty One Nails and is told mostly by Niall, though the focus shifts towards his daughter Alex. In the first book Niall discovered his feyre heritage, started a relationship with his long-lived guide Blackbird and took the role of Warden in order to find a secure place for himself in the seven courts. The Road to Bedlam sees Niall continuing his training as a Warden and living with Blackbird, who is expecting their baby. A fatal accident means that Niall loses his teenage daughter Alex. An old enemy returns as an envoy and Niall is sent to a northern seaside town to investigate the disappearance of local teenage girls. He becomes convinced that his daughter isn't dead, and is determined to find her.

The characterisation is good. Now that Niall is part of the world of the feyre he has a different outlook and is more prepared for the strangeness he finds, though it's clear he has much to learn about other feyre. His grief over the loss of Alex, his attempts to make sense of the tragedy and the lengths he'll go to in order to get her back show Niall's mettle more than the previous book. Blackbird is still a good character, though her pregnancy forces her to live without magic for a while she still proves to be highly resourceful. There's more detail about Niall's fellow Wardens, and a few characers

The first book struck me as London fantasy with a diversion to the midlands countryside. This book proves that it's fantasy that's willing to explore different locations, thanks to a feyre transportation system that connects sites all over the country. In his first mission as a Warden Niall is sent to a fading northern coastal town, the kind of place that once did well from fishing and seaside holidays, but has declined. There's a strong sense of place and a sense of a community struggling on despite being out of touch with modern life. The minor characters that populate the town are as much part of the setting as the descriptions of the landscape.

The story is well done over all, successfully balancing various strands. The fate of Alex is the most crucial part of the story for Niall. His investigations into the disappearing girls mirrors his search for Alex but it is not directly related. Each part of the search brings its own surprises, shows the differences between the girls and highlights various non-fantastical issues that are faced by modern young women who desire escape. It's interesting that the traditional escape through the discovery of magical powers turns out to be a dead end. There's also plotlines that relate to the series as whole, the reappearance of the self-exiled eighth court of the feyre brings danger to Niall and Blackbird, and also complicates the political situation in the magical world.

This is a fine read and, with its predecessor, a great example of modern British fantasy.

I intended to read this anyway, but it was strongly recommend to me by @pablocheesecake of The Eloquent Page. You should read what he thinks, he knows his stuff.