Guinan's hats are as cool as always. Q disappointingly doesn't have a hat this time. The Borg's view on hats is generally unknown, but they like headgear for babies. 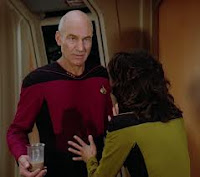 What Happens
Geordi jokes with Sonya, a new ensign, because she thanks replicators.* She accidentally spills hot chocolate on Picard. The Captain goes to change his clothes but the turbolift impossibly opens into a shuttle, which is occupied by Q.
Geordi and Sonya go to 10 Forward, where Guinan senses a disturbance in the force.** She calls the Bridge, which is a first, and asks Riker if everything is OK. When Geordi realises Guinan is concerned he checks on Engineering.*** Troi tries to contact Picard and the computer reveals that he isn't onboard or even in the sector. Riker orders a search.
In a shuttle way out in space Q offers to return the Captain if he'll listen to a request. They appear in 10 Forward and Guinan pops up from behind the bar. She and Q have bad history. Q asks to join the crew; he's been exiled by the Q Continuum and has returned to the ship where he had such fun. He even suggests he might be willing to give up his powers. Picard hears him out, but refuses because they don't trust him. Q says they need him for what's coming. Picard and Riker claim that they're prepared and anger Q with their arrogance, so he knocks the ship way off course. Q announces that they'll get a taster of what's to come, Guinan says they should turn back.
Despite the warnings of the mystical bartender Picard decides he's going to explore before heading home. A 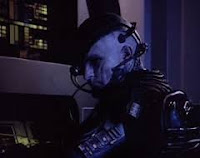 cube-shaped ship approaches. Guinan reveals that the ship belongs to the Borg, they scattered her people across the galaxy. Geordi reports an intruder in Engineering. A pale-skinned, cyborg-looking guy silently scans consoles, ignoring communication and attacks. Worf eventually kills it on Picard's orders. Another one immediately appears and continues scanning, it ignores Worf's phaser, collects something from its fallen colleague and silently leaves. 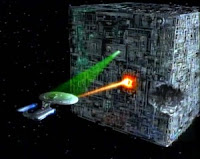 Guinan says the Borg can't be reasoned with. Troi senses a collective mind. A shadowy Q appears on the screen and asks whether they want him on the crew now. The cube holds the Enterprise in a tractor beam, which slices into the saucer. The ship is able to damage the cube and escape the beam, but not without casualties. Riker says they have to find out more and suggests an away mission.
Riker, Data and Worf beam to the cube. This is one of those away missions where Data says the smart stuff, Riker decides things and Worf looks menacing but says very little. There are loads of Borg stored in slots, they seem to be in sleep mode. The Borg walking around the ship ignore the away team completely. Data figures out that the ship is focused on regenerating and Picard orders the team back. The Enterprise leaves, pursued by the cube. Q appears again and points out how hopeless the situation is. He mocks Picard for his earlier attitude. Picard asks Q for help and admits that he was wrong earlier. Q respects this and spins the ship back to where it was before.

Picard is angered by Q's return and says he agreed to leave his ship alone. Q counters by pointing out that they're in a shuttle far from the Enterprise. Picard describes Q as the most unique of the new and different lifeforms they encounter, and there's a sense that Picard is intrigued even while he recognises how chaotic and dangerous he is. Picard's suspicion of Q and refusal to grant his request are justified, but Picard (and Riker) do seem stubborn and short-sighted when they claim they're ready for whatever they find without Q's help. Q is a trickster and his help is dangerous, but it's foolish to deny his greater knowledge.
Picard doesn't head home when Guinan says he should due to his love of exploration, another example of acting from a place of ignorance. Otherwise his actions are fairly sensible and he does ask Guinan to share her knowledge.
At the end of the episode Q reappears to say I told you so. Picard concedes the point and asks Q to deus ex machina them out of trouble. Q respects Picard asking for help. "Another man would have died rather than ask for help." I don't think such men should be captains of things.

Riker believes they must learn more about the Borg rather than escaping. Not sure I agree, but I can understand his thinking. It's really very lucky for the away team that the Borg ignore them.
The Borg ship is industrial and creepy, all girders and walkways. It's interesting that the Borg are a collective and yet the individual Borg are designed differently and each has a customised slot in the ship. Riker finds the Borg nursery, which has babies wired into drawers. I think maybe this is meant to be sinister, but as Riker's reaction to the babies isn't emotional I'm not actually sure. I did think that it made for good baby cosplay.

Does Not Compute
The Borg are robot-looking, they're organic beings enhanced and altered with cybernetic technology. They're also really pale and seem to have no emotions. At no point does the episode make any comparisons between the Borg and Data, even though I reckon there's reason to do so. On the away mission Data examines the Borg ship in his analytical way, and is less interested in the newly discovered aliens than he is in humanity. Data's quest for individuality is a mirror of the Borg's collective consciousness.

Blind Engineering
Geordi and new ensign Sonya Gomez have a good scene at the start. Sonya is chatty and nervous, thrilled to be on the Enterprise, but terrified of making a mistake (which makes her very relatable). Of course her nervousness makes her more mistake-prone. Geordi is clearly bemused and gallantly but pointlessly tries to take responsibility when she spills hot chocolate on the Captain.
Later in the episode Geordi guides Sonya as they try to divert power after the Borg attack. Sonya has trouble concentrating as she keeps thinking about the people who died, Geordi tells her they have to focus on the task at hand, they can grieve later. Geordi's people skills work in professional as well as social contexts. 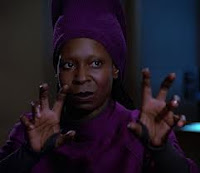 Guinan senses Q's presence when he takes Picard and the shuttle, she's had that feeling before. When Q appears in 10 Forward it looks like Guinan was waiting for him. (Is it coincidence that he and Picard materialised there?) They have bad history going back 2 centuries. Q says "This creature is not what she appears to be. She's an imp, and where she goes trouble always follows." Picard points out that that sounds like Q. Guinan reveals that not all Q are the same "some are almost respectable". While Q is angered by how far humanity has spread, Guinan believes that their ability to adapt is their greatest strength. Little else is said about how they know each other, it's really intriguing.
Guinan plays a bigger role than usual because she has previous knowledge of the Borg. She wasn't there when they destroyed cities and scattered her people, but she's heard about it. She warns that the Borg will not listen to reason and advocates escaping. She's not exactly scared, but she knows that the Enterprise will not do well from the encounter.


Continuity
The planets near the Borg cube show signs of civilisation, mostly roads. However all the machines have been "scooped" off the surface. Data compares it to the destruction found on planets in and around the Neutral Zone in the last episode of series 1 (though it feels like Worf's discovery since he reports it both times). It was clear then that the Romulans had discovered same thing on their border planets.

Staff Meetings: 1 (with an intermission for weapons fire)
1(a): Picard invites Guinan to the meeting because of her knowledge. She wasn't there at the time but describes the Borg swarming through a system. It's concluded that the Borg intrusion into Engineering was information-gathering. Picard asks if they can reason with them, but Guinan says no. The cube interrupts with a hail that says they can't defend themselves and will be punished if they try. Troi senses a collective mind, and the advantages of this are discussed. The meeting is completely disrupted when Worf reports that they're caught in a tractor beam.
1(b): The meeting restarts with Picard asking Guinan for more information. Q arrives and tells them that the Borg are like nothing else they've encountered. They're only interested in consuming tech. Picard asks Q if it's an illusion, it isn't. The 18 lost crew are mentioned. Riker wants an away mission and Picard agrees, despite Guinan's shock.

No Magic Here
Having a ceature like Q in the show from the start shows that the unexplainable is important. Guinan being a recurring character also shows that there's room for the spiritual and mysterious in the lives of the characters, though she's never treated as a novelty.
The meeting of Q and Guinan is kinda awesome. They have a moment of guarded standoff, making it clear that Guinan can match Q. His name calling and contempt suggests she may have gotten the upperhand over him previously. Q doesn't use his godlike powers that much (nor does he wear any hats), but he does snap his fingers and send the Enterprise spinning 7000 lightyears through space. The visual effect for this is pretty cool. Q's magic is big and flashy and makes the impossible real. Guinan must have magic, but we don't see it, she's a strong presence full of wisdom but also greatly enigmatic. It's no surprise that she's used different names and forms in the past.

Death by Space Misadventure
18 people from the Enterprise are killed when a beam from the Borg cube cuts into the Enterprise and pulls a section into space. Their names are not listed but their loss is felt.
Picard asks Q if it's all one of his tricks, as he normally creates elaborate illusions (if they are illusions) to make his point, unfortunately this time it's real. At the end Picard asks whether the lesson Q was teaching them should have cost 18 lives, Q describes it as "a little bloody nose" and says space is not for the timid. 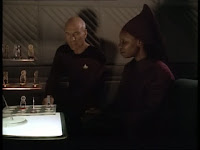 The End
Picard and Guinan play 3D chess. Guinan warns that Q set things in motion too early (odd since he was the
one who claimed humanity were going too fast). She says borg see them as raw material, but hints that there could have been a relationship, which is a change in tune. Picard says that perhaps they were complacent and a challenge is what's needed. It suggests he's absorbed the lesson but perhaps failed to recognise the full implications of what happened. 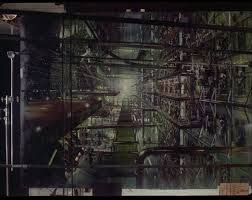 * Is that so weird? I sometimes do that with cash machines.
** Guinan is basically a cross between a Jedi and a Time Lord, right?
*** Using a mystical woman as a barometer for Engine problems is almost certainly in the manual somewhere.
Posted by Catherine Hill at 18:05