Episode: s1, ep1 & 2
This first, double-length episode is exposition-tastic and gets so slow at times that the antagonist literally shows up to nudge the plot along. We see that the set designers are very proud of their work with two separate look-how-shiny-the-bridge-is scenes. There is also a lot of dramatic music to tell us what we should be feeling.
The episode is trying to do a lot of different things, and introduce a lot of characters, which is ambitious but also loooong. 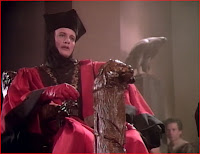 Captain Picard takes his new ship to investigate Farpoint station and collect the rest of the crew. On the way the Enterprise is attacked by a 90s screensaver* that turns out to be a very powerful entity called Q. He condemns humans for savagery whilst wearing a variety of historical costumes and entertaining hats. Picard boldly attempts to run away, when that fails he surrenders the ship (minus saucer-section). This is not a good start to the job.
Q takes Picard, Data, Troi & Tasha Yar to a primitive court and tyrannically tries them for humanity’s crimes. Picard speeches at him until he agrees that what they’re about to face will be a suitable test.
Meanwhile at Farpoint, Riker investigates why the station is so advanced when the people who made it aren’t. The Enterprise arrives, characters meet and yet more exposition is exposited. Q reappears and tells them to get on with it - he is now the voice of the audience. 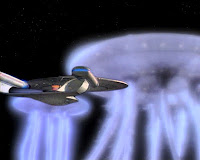 Further investigations reveal that there is something rotten in Farpoint. A mysterious ship appears and attacks the planet, discussion ensues. An away team beams to the mystery ship and discovers it’s a lifeform. The ship-lifeform is a giant space jellyfish, trying to rescue its mate, which is the station. The Enterprise shoots the station with a sparkly beam of helpfulness. The station turns back into a space jellyfish and zooms away with its partner. 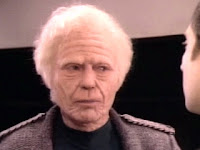 Guest Star
DeForest Kelley shows up in old-man-makeup as Admiral Bones. He identifies Data as the new Spock (in case we hadn’t guessed), though I do agree with his assessment of Vulcans as annoying.
He also tells Data to treat the Enterprise like a lady. I’ve never understood it when men say that about vehicles, speaking as a lady we have rather different requirements.

Riker: lover, fighter, middle-management
Picard and Riker’s first meeting involves no warmth and little eye-contact. Riker sees himself as the Captain’s aide and bodyguard. Picard sees Riker as a guy who can help him deal with children. Bachelor Picard is surprised he’s been assigned a ship with children -as we will see over the course of this blog series the only person more surprised by this is me. It’s possible that Picard’s inability to assume a genial Captain-Birdseye-like persona** is one of the reasons Riker grows a beard later.
Apparently Riker and Troi used to be an item, but since they maintain careful blank-face when they meet, we only have a voiceover and music to tell us this. Riker purposely avoids being alone with Troi when the away team splits up.

Does Not Compute
Riker meets Data in a holodeck jungle practicing whistling (as you do). Data demonstrates his superiority to humans, then says he’d give it up to be human, even though he’d just observed that 'prejudice is very human'. Apparently ill-feeling towards others based on their inherent attributes is what’s missing from Data’s life.
Riker calls Data Pinocchio, just in case we hadn’t figured that out.

Awkward Moment
When Riker meets the Crushers young Wesley says 2 truly excruciating things.
1. “If you’re wondering about Mom ... she’s not unfriendly. She’s just shy around men she doesn’t know.”
Woah! He both suggests his mother is a timid spinster, and rebukes her for not being ‘friendly’ enough to her new colleague. I’m surprised she doesn’t clip him round the ear.

2. Riker is obviously keen to hear how the Crushers know Captain Picard. Despite what he just said Beverley indicates that Wesley should answer this simple question.
“When I was little he bought my father’s body home to us.”
WTF? 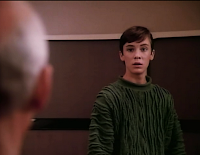 I’ve worked in libraries and I’ve worked in a swimming pool and I’ve heard children say some weird stuff. I’ve also heard children say some pretty worrying stuff. I’ve never heard that.
Wesley sounds like he should be speaking from a darkened corner. It’s clear he associates Picard with the death of his father, and is emotionally messed-up.
As well as being creepy it’s also kind of hilarious. I imagine Picard cradling the body of Pa Crusher in his arms and carrying it down the street to the Crusher residence.

No Magic Here
Farpoint station ‘almost magically’ creates what people want, including apples and patterned fabric. It’s like a really convenient replicator. Station Administrator Zorn rebukes the station for this, suggesting that the space jellyfish is a hospitable being, despite its captivity. Geordie says the space jellyfish convert energy to matter, so that’s all explained.
Q is ‘very advanced or very different’. He can alter his appearance and location at a whim, he can freeze/unfreeze people and he whisks 4 people away in space (and possibly time) to play out his created-but-real courtroom scenario. No one actually says magic, but let's face it, that's the best explanation.

Future Fashion
The Federation seems to be suffering a fabric shortage that requires most female crewmembers to wear miniskirts. Troi has only calf-length boots to cover her legs. Dr Crusher and Tasha Yar have clearly obtained trouser requisition forms.
During the panicked scenes before the saucer separation I was amused to see a male crewmember wearing a miniskirt.

Future History
One of Q’s outfits is that of a soldier from a period when humanity controlled their armies with drugs. The raucous, primitive courtroom scene is set in 2079 during the ‘post-nuclear horror’. So I shouldn’t plan on doing anything nice in my 90s, then?

Future Prejudice
Picard mentions that the Ferengi consume their business partners. At this point we’ve never met the Ferengi, but clearly we’re supposed to think badly of them.
As someone who grew up in the countryside I feel I should point out that this is how racism spreads.

Won’t Somebody Think of the Children?
Whilst retreating from Q, Picard pushes the ship past safe speeds and there is definitely a Vulcan child on board before the saucer separation.

The End
The wonder of seeing a reunited pair of space jellyfish is tempered by Q’s ominous threat to return one day.
Picard suggests that their future adventures will be even more interesting, which I guess is part apology and part encouragement to keep watching. 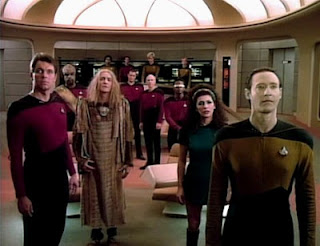 * To be fair in 1987 90s-looking stuff actually was futuristic. Of course now it looks like something from over a decade ago.

** I mean the Santa-of-the-Sea version of Captain Birdseye. Not the younger guy with the designer stubble.
Posted by Catherine Hill at 12:20