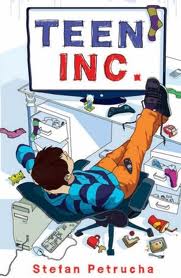 Jaiden Beale is the first child in US history to be adopted by a corporation, a PR stunt after his parents were killed by a faulty gas valve. 14 years later Jaiden has had a very odd upbringing and is trying to negotiate the tribulations of teenage life while being raised by a committee. His bedroom is a converted office in NECorp's headquarters and gets his breakfast from the cafeteria. Since attending public middle school he's manged to keep his strange background quiet, but his anonymity is threatened when he invites his pretty lab partner over to his 'house'. Jaiden soon has to confront the way his parent corporation operates and the dangerous people that work within it.

This book is interesting if very unlikely. Jaiden is portrayed as a normal teenage boy trying to negotiate an unusual situation. As with most teenage books it's written in first person* and the voice and thoughts of the main character are the reader's window to the world. There are various times when Jaiden does stupid things, but these are not surprising, though he has a tendency to repeat himself. The last third of the book has unexpected twists and the whole situation turns from teen sitcom to weird action film, with unlikely espionage and actual, serious danger changing the tone, but not the expected outcome. It was fun, but the action bits were pretty unrealistic. It's clear the author has an anti-corporate message, but if anything this didn't go as far as I'd expected it to. In the end the situation is improved but the status quo doesn't really change.

The Sky is Everywhere by Jandy Nelson 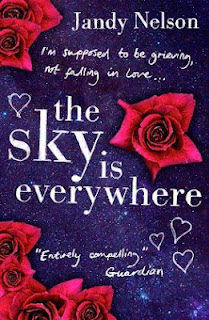 Lennie (Lennon Walker) has just lost her older sister. Bailey, a healthy young woman attending drama college, died suddenly and now grief has filled her household. Lennie lives with her grandmother and uncle, her mother simply left when she was a baby, in a rather bohemian town in Northern California. Lennie is unable to come to terms with her sister's death and has surprising feelings for Bailey's boyfriend Toby. When she returns to high school she meets Joe, and soon falls for him, though her grief could destroy her happiness all over again.

I really liked this book. I wasn't sure if I would but despite the subject matter it was actually pretty life-affirming and romantic. The characters were all well written and believable, another first person book,* but one where other characters feel as authentic as the narrator. The grief of Lennie and her family is palpable, but understandable and not overplayed. The distraction and joy of Joe's presence is great and the relationship between Joe and Lennie is excellent, a great cure for the ridiculous pining and overly-complex love triangles that crop up in so much teenage fiction. Joe is a wonderful character, a great boyfriend for a teenage girl, but not idealised to the point of unbelievability, he has flaws but doesn't play games.
Each chapter is preceded by a picture of words scrawled into a wall, cut into a tree or written on rubbish, found around the town. These are the thoughts and poems that Lennie writes and hides to express her feelings about Bailey's death. They are nicely done and provide visual interest throughout the book, as well as allowing the reader to understand Lennie's feelings and her relationship with her sister without clogging the narrative sections.

* I think all the US teen books I read in the last couple of years are written in first person POV. Most of the UK ones are too, but I can think of exceptions. Has it always been this way and I only just noticed, or is it a new(ish) rule? I can think of several in diary format, but actually that seems to be less popular now than simply having the characters tell their story without a framing reference.
Of course it's possible I've just missed a whole swathe that are written in third person, but there's definitely a major trend for first person. Is it because that this lets readers connect to the character more and young people need/want that? Is it that young adults don't like third person so much, or is that just what the publishers think? I'm honestly not sure, would be interested in any insights people have on this.

I do suspect that this is why no one can remember the names of main characters when talking about books at Teenage Reading Group, because it's all 'I' and 'me' in the text. Both staff and teens regularly have glance at the blurb to remind ourselves.
Posted by Catherine Hill at 16:36