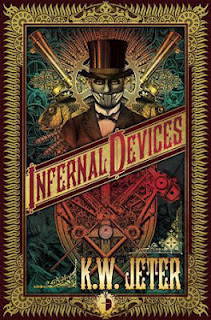 Enjoying a bit of steampunk as I do I thought it would be edifying to read one of the early examples of the subgenre. Who better to read than the writer who coined the term, little realising (as he says in the introduction of this volume) quite where it would lead.
Infernal Devices is the story of George Dower who has taken on his late father's watchmaking business. However it becomes apparent that Dower Senior was in fact a mechanical genius, creating all manner of advanced and impossible devices. George is dragged into the machinations of his father's former clients and admirers, and is soon exposed to the improper, seedy and dangerous underbelly of London society. Eventually travelling the length of the country, encountering thugs, madmen, fish-people and ladies of easy virtue along the way.
This is an adventure full of odd occurrences, comic characters, and miraculous devices. It is good fun to read. The narrative voice of George is full of character using antiquated but understandable language and it's good to see his limited, proper-Victorian viewpoint expanded and confounded. There were times when the devices of Dower Senior seemed a bit too unlikely, or the changing twists got a little confusing, but overall it's a good read for those who like adventures in Victoriana. 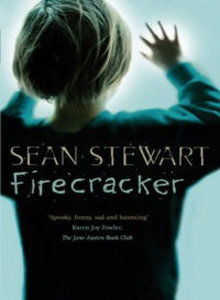 I read this because it's by one of the people behind the very interesting Cathy's Book series. This character-driven, dark, adult book very different sort of story, though I caught similarities in the writers 'voice'.
Will Kennedy has always been able to see dead people, ghosts. His cousin AJ used to call him Dead Kennedy, but she was killed in her 20s. As an adult Will's life is a series of low income jobs, a cheap apartment and spending every other Sunday with his biological daughter Megan. He gets a call from a distant cousin who's having a ghost problem, and discovers that the guy murdered the girl who's now haunting him. Will barely escapes from that night and over the next few weeks he faces the mess his life is in and must deal with years of pent up feeling, all the while being haunted by ghosts of his recent and distant past.
This book was not what I expected it to be. At first I was expecting a supernatural detective story, where Will would get out of his financial troubles by investigating ghosts for people, this happens a bit but is not the focus of the story. Instead it is all about Will himself, the choices he's made, the memories and decisions that haunt him and a vengeful ghost that tries to drive him to violence in order to destroy him. The reader is firmly in Will's head from the beginning and there are a lot of flashbacks, creating a very personal and intimate journey with the character.
The setting -urban Texas- is very well described in a grimy but loving way. This a Southern Gothic book, and the sense of place pervades every scene so that my recollections are full of heat and humidity, industrial sprawl and cheap housing. Will himself is left-wing and alternative, a minimum wage anarchist and punk fan, which is very different from the stereotypical idea of a Texan, yet he is so rooted in the environment that it's hard to imagine him elsewhere.
Posted by Catherine Hill at 12:28