I'd like to thank Dave C. for his kindness in lending me his Next Gen DVDs, its certainly sped things up.

Episode: s1, ep 5
It's time to meet the Ferengi, an alien race with very different values to the Federation. If we learned anything from Code of Honour it's that other races are treated with respect and dignity, that certainly has nothing to do with how much they resemble humans... Oh, wait.

What Happens
The Enterprise is chasing a Ferengi ship that’s stolen an energy converter. The Federation hasn’t had direct contact with the Ferengi before and they don’t even know what they look like, though they’ve heard a lot about them. The Ferengi are compared to Yankee traders, which means they’re very mercantile, and it’s clear the Federation (or at least the bridge crew of the Enterprise) look down on this. 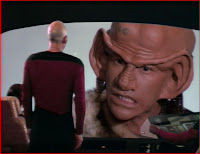 The Ferengi ship turns and fires, then the Enterprise is immobilised and the ship’s power is rapidly drained. Picard tries to surrender to the Ferengi, and the Ferengi try to surrender to the Enterprise; it’s clear that both ships are in the same predicament. The planet they’re near used to be part of a huge, advanced galactic empire that fell millennia ago. Both ships agree to a joint investigation of the planet.
The Enterprise away team is separated when they arrive on the planet, then they’re attacked and captured by Ferengis with energy whips. Meanwhile the Enterprise loses so much energy that life support systems start failing. The planet manifests a Guardian figure who tests the Federation and Ferengi away teams. The Ferengis loudly blame and accuse the humans while grovelling to the magical Guardian guy. The Guardian tests and approves of Riker’s mind, so everyone is saved.

Guest Star
This is retroactive, but it’s fitting that Armin Shimmerman plays one of the first Ferengi. His character unsurprisingly looks like a younger version of Quark from Deep Space Nine, presumably before he met Garak and learnt about tailoring.

Fringlish
Picard gets misty-eyed while talking about the French flag and seems to be moments away from saying something about liberté, égalité, fraternité, when Data interrupts him to talk about other flag colours.
When the Enterprise fails an escape attempt Picard swears in French.

Riker: lover, adventurer, middle-management
Riker has to shoo some small children out of the lounge they aren't supposed to be in. William Riker: child-herder.
Riker leads the away team, finds his fellow crew members on the mysterious planet, fights the monkey-like Ferengi attacks, and then saves them all from destruction, with his brain. Less impressively he asks Geordie if he’s conscious, which is one of the stupidest questions you can ask a human. 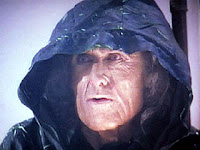 The Guardian of the planet appears as a floaty face in the sky, then as a robed and hooded man. He might as well be the Keeper of the Bridge of Death, or something. Like most mystic guardians he’s very powerful. He claims he could have destroyed both ships in orbit, and was clearly able to monitor their activities while sucking their power. He can also see into the minds of those on the planet as he tests and judges them.
At no point does he ask anyone about the air-speed velocity of an unladen swallow.

Future Prejudice
From Picard’s throwaway comment in ‘Encounter at Farpoint’ it’s clear that the Ferengi aren’t well thought of, even before this contact.
Worf calls them pygmy cretins, which is harsh.
Riker decides that the Ferengi are like humans used to be and, with their current tech level, this makes them dangerous. He also very patronisingly says that they must be given the chance to learn. So basically it’s not that Ferengi are different, they’re just plain backwards.

Won’t Somebody Think of the Children?
The Enterprise loses so much power so fast that life support is barely functional and families huddle together with blankets to keep warm. Dr Crusher tells Picard she almost gave Wesley a sedative so he can slip away peacefully. This is grim stuff, and clearly space is no place for children. Yet it seems that Star Fleet officers choose to enforce this dangerous lifestyle on their kids, rather than having them live in the utopian safety of the Federation planets.

The End
The Enterprise and Ferengi ship are allowed to leave, the Enterprise gets the stolen goods back. Of course everyone on the Enterprise is too tired to be happy about this because they’re still sleepy from the oxygen deprivation. Riker decides to cheer everyone up by sending the Ferengi some Chinese finger traps as a hilarious practical joke (you see how the Federation are much more advanced). 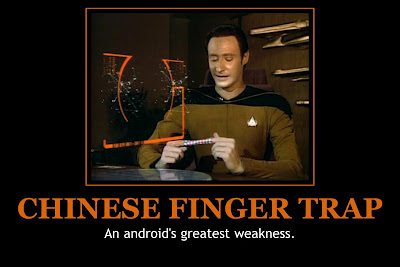