Episode: s1, ep3
More interesting than the previous episode, the Naked Now is apparently trying to tell us something about temptation, but what we really learn is that precocious kids can get away with a hell of a lot.

What Happens
The Enterprise joins the research ship Tsiolkovsky to monitor a dying star. The other ship sends out strange messages before the entire crew dies in an apparent accident. The away team find the kind of mess normally associated with teenagers in US films who’ve thrown a party while their parents are out of town. Plus there are a load of naked frozen people.
On their return Dr Crusher checks the away team and confines Geordie to sickbay because he’s acting oddly and is surprisingly sweaty. However Geordie leaves, spreads his condition and soon most of the crew are too hot and acting intoxicated. A similar thing happened on Kirk’s Enterprise, but the cure used then doesn’t work this time.
Wesley has been recording the Captain’s voice in order to play at being a crewmember. He uses the recordings to trick senior staff and hijacks Engineering, where he pretends to be Captain while the crazy-drunk Engineers giggle and dismantle vital systems.
Meanwhile a piece of the collapsing star detaches and flies towards the Enterprise in the shape of a glowing rock. Picard, Riker, Dr Crusher and a blonde Engineer keep working to save the ship from destruction. Dr Crusher creates a working cure despite being infected herself. Wesley’s knowledge and quick-thinking eventually helps to save the day and everyone forgets that the trouble in Engineering was largely his fault.

Does Not Compute
Data has sex, I have no idea why. (See Awkward Moment)
I’m surprised he even knew what Tasha was getting at when she asked if he was ‘fully-functional’. Earlier in the episode he doesn’t understand the word ‘snootful’ after hearing it in context, and he was unable to guess what ‘snoop’ meant last episode. (Did his programmers miss out words beginning with ‘sn’? Were they distracted by all the sex programming?) This happens while Data is on duty, he ignores direct orders from Picard, and he knows Tasha has the intoxication infection. Since he doesn't have either libido or emotions I cannot fathom why he felt any need to ignore work for sex.
I’m not sure that it’s necessary to programme an android with sex skills, especially when you didn’t really programme it with other nuances of human interaction. It makes me suspicious of what Data is meant to be used for.
I’m also confused about this from a character viewpoint. Data’s supposed to be slowly learning human interactions and social skills, yet when it comes to the most intimate human interaction he apparently doesn’t need to learn, he already has the necessary programming. It somehow feels like a huge cheat.

Data catches the intoxication infection, though presumably he doesn’t sweat. Picard seems to think that shouldn’t have happened and, funny though Brent Spiner’s pratfalls and facial expressions are, I have to agree. It seems like a massive design flaw.

The Boy
Wesley has been recording Picard’s voice and manipulating the recordings in order to more fully realise his personal fantasy of being a crewmember and receiving orders. Far from being ashamed of this stalkerish behaviour (which must be against regulations), he proudly shows what he’s done to Geordie. He also shows Geordie his science project. It isn’t actually explained why Wesley is showing his projects to his mother’s colleagues rather than being with children his own age, but I think it’s safe to assume the other kids don’t want to play with him.
It’s also safe to assume that Wesley has made some enemies in Engineering. Certainly blonde Engineer was very angry about being tricked and locked out of her own department. The crazy-drunk Engineers probably feel pretty stupid about the whole incident, first he tricked them, then he showed them up. I imagie they're feeling pretty resentful.
Worf is the voice of the audience at the end of the episode when he expresses shock that ‘the boy’ is given thanks. After imitating the Captain, giving fake orders and tricking senior staff into leaving their posts I personally think he should spend some time in the Brig.

Awkward Moment
Data and Tasha Yar have sex.
What? I don’t even…. Why? This makes no sense. (See Does Not Compute)
Tasha (who talks about her traumatic childhood*) says she wants gentleness, joy and love. She’s not likely to get those things from the only crewmember who doesn’t have emotions. Then again she's crazy-drunk, so presumably any crewmember would have done. I'd assume the main reason for sex with Data is lack of emotional entanglement. Data says he’s programmed in a ‘broad variety of pleasuring’, probably making him the galaxy’s best sex toy.
I'm not sure why or how the sight of her torso and heavily-gelled hair inflames Data's passions, since the whole point of Data is that he doesn't have passions. It's highly illogical.
The whole cringing scene is made worse by his creepy smile as she drags him into her bedroom. It’s not like he’s actually happy, he doesn’t have emotions. I guess he caught the drunk-crazy infection really quickly.
At the end of episode there's awkward eye contact between them on the bridge, then Tasha tells Data it never happened. Wise move, if only we hadn't had to see the awkward, nonsensical preliminary.
Given what little I know of the Original Series I can only assume that there was a strict sex-to-episodes ratio required in Star Trek and this was the writers making sure they met the quota.

Future Fashion
Troi has trousers now, presumably the aforementioned trouser shortage is almost at an end. I noticed some female crewmembers in the background still have miniskirts.

Tasha's seduction outfit consists of a pair of full-length sleeves with just enough fabric to barely cover her breasts. Any full-blooded crewmember would react and apparently it's so alluring that it even works on ones without blood.

Security Breach
For someone confined to sickbay Geordie is able to leave really easily - he takes off his badge, does that make him invisible? No one attempts to test Lt. Yar, who dragged him back to sickbay. Frankly the quarantine procedures are terrible; people spread the drunk-crazy all over the place. Given the speed of the infection I’m guessing that Enterprise crewmembers are touchy-feely drunks.

Why would you let an unescorted child wander around Engineering? Why would you leave a child to look after Engineering without checking with someone first? If the Captain’s orders don’t make sense I’m sure you’re allowed to ask for clarification. Also, where is everyone else in Engineering, was it really just those two crewmembers?


Death by Space Misadventure
The 80 people aboard the Tsiolkovsky were either blown (not sucked) out of an airlock, or else frozen naked in their quarters. Their families don’t even get their bodies back as the Tsiolkovsky is blown up to shield the Enterprise.

Won’t Somebody Think of the Children?
The Enterprise is just seconds away from being completely destroyed by a glowy sun rock. Every soul on board would have died, there was no evacuation attempt.
Almost everyone is basically drunk, does this include the children and the people looking after them?

The End
Picard lives up to his previous promise, this adventure was more interesting than the last. He also concludes that the crew should avoid temptation. I wonder if there will be a lesson like this after every mission? 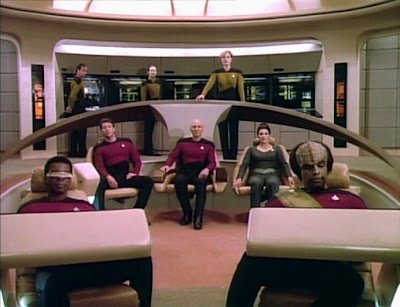 * Security Chief Tasha Yar is strong and aggressive. She had a traumatic childhood that included abuse and possible sexual assault, she is a survivor. If only there were some way women could be strong and tough and good at fighting without surviving traumatic experiences.
Posted by Catherine Hill at 15:30