A Month of Letters

A few weeks ago I discovered the Month of Letters challenge, which was started by author Mary Robinette Kowal. The idea is to send 24 letters (one each postal day) during the month of February.

I decided this sounded like an excellent idea. As a kid I had a few pen pals over the years (this was before email really took off) so I understand the basics of letter writing, even though I'm probably a bit out of practice.
There are plenty of people I call friends who I don't have much contact with any more, which is a shame. There are also people I've met over the last few years, mostly online or at conventions, who I'd like to become more friendly with. In both cases sending a good old-fashioned letter seems like a nice idea. It's also a good chance for me to do a bit of work on my handwriting, which is not brilliant.

A benefit of letters over emails is that you can also send physical things, though 3D printers may change that in the future. Since I've decided (again) that I'd like to do more sewing I've made some simple things to send with my correspondence. I'm actually a day behind already, but that was due to lack of sewing supplies.

As I'm using this to strengthen existing relationships I've got a few people in mind to send letters to (though I don't yet have all their addresses). If I start to run out of recipients I may do what others are doing and open the letter writing up to folk on the internet (or on twitter @LetterMonth), as a way of making new friends. 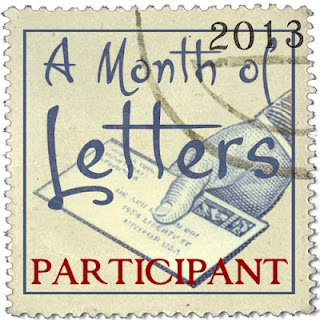 I'm actually quite excited about this at the moment, and looking forward to getting letters written.
Posted by Catherine Hill at 13:33