I finally read the last Tale of Einarinn. It was good and a satisfying conclusion to the series, though somewhat different to what I was expecting.

My thoughts on the first four volumes:
The Thief's Gamble
The Swordsman's Oath
The Gambler's Fortune
The Warrior's Bond 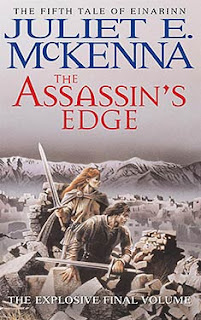 This final volume is narrated mostly by Livak, though Ryshad is in it a lot. There's a lot more detail of what they're actually like together. This is good, as much of their romantic relationship happened off-page. When they met in the first book I thought that Rysahd seemed a better match for Livak than her lover at the time. There followed 3 books in which both were off doing their own thing, though both thought about the other and seemed increasingly keen on building a life together. It's nice to see that pay off. At the start of this volume they have settled in the new (or should that be renewed) colony of Kellarin. Livak might be getting a bit bored of such a stable and fairly domestic life, but then the colony's peace is shattered by pirates.

I was not expecting the pirates. Like anything that happens in this series it makes perfect sense when you see the wider context. Of course pirates would prey on newly established trade routes. It soon becomes apparent that the pirates have been encouraged or aided by an old enemy who appeared in book one. What seemed like a complication before the inevitable confrontation turned out to be the spur that prompts the characters to act. A small party is sent back into dangerous territory to settle the problem once and for all. While the other main characters try to protect the community they've built. I had images of a larger, flashier final encounter (not that there isn't plenty of flash and big bang as well). I've since realised that in many ways a battle wouldn't actually make sense, and if there's one thing you can say for Juliet McKenna's books (or at least the ones I've read so far) it's that they always make sense, even if they don't do what you initially expected.

The actual ending sees a lot of happiness for characters, but isn't syrupy or even particularly sentimental. Life goes on, though there has been loss and hardship for some. There's an optimistic outlook, full of new opportunities and challenges. There's also scope to revisit characters later (and I know that some turn up in later series).

I don't feel like I need to recommend this book. It's a great read, but there seems little point in suggesting anyone reads it if they haven't read the previous volumes. Which is not to say that the book is inaccessible for new readers, there's enough background info, but you'd be missing a treat by skipping to the end.
If you have read the other books then you don't need my recommendation.
Posted by Catherine Hill at 15:02