Loud as a Whisper

It's a disability episode, and today we are learning about deafness (with a brief look at blindness). What we mostly learn is that it's very inconvenient to talk to the deaf.
Also just because someone has a reputation for being very good at something doesn't mean they won't make basic and idiotic mistakes, it seems. 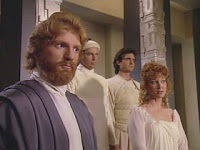 The Enterprise is sent to take a hot-shot mediator to meet with 2 peoples locked in war. Starfleet is only allowed to transport the peacemaker, not to get involved in any discussions. Picard, Troi and Worf go to collect Mediator Riva, who they clearly know nothing about because they are surprised to discover that he is deaf and communicates through three translators. The translators are called his Chorus, they're attuned to his thoughts and each speaks for a different part of his personality. One man speaks for scholarly intellect and artistic imagination. The other man speaks for passion, lust and is a warrior. The woman speaks for balance, harmony and wisdom.
Riva is clearly attracted to Troi and takes her on a date, which seems to go well. He only brings the passion-speaker, which shows that the Chorus aren't inseparable from him, though we find out nothing about them as individuals. We learn that Riva can lip read, which explains the speed of his communication, even with the Chorus.

At the war-torn planet the ceasefire is broken so Riva's meeting with the representatives is all the more urgent. He is confident, even arrogant, about his professional abilities, though his reputation is formidable so Picard and Riker defer to him, despite reservations. He takes only Riker and Worf to the planet and tells them not to respond to the delegates, even if provoked. One of the hairy delegates tries to kill Riva, but destroys his Chorus instead (three people with one shot, this guy has some skills), the other hairy guy is aghast at this. Riker hurriedly beams Riva away.
Back on the Enterprise no one can understand Riva's angry gestures. Picard sends Data to learn whatever his gestural language is. Pulaski can't help at all as Riva is from a ruling family that has no hearing genes (despite having ears). Data learns various sign languages and is pointed at Riva. Picard offers Data's services, but Riva doesn't want that as there's no emotion or connection. Riva becomes withdrawn and uncooperative because he has no control (maybe he's also grieving his Chorus as they've been with him all his life). 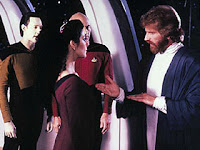 Picard gives Troi permission to try and stop the war, even though she has no experience and they were ordered not to get involved. She asks Riva's advice, he lectures her on communication and promoting understanding and active listening (presumably this stuff is quite interesting to a counsellor). Troi turns these words back on him and his own situation, and suddenly he can do his job again.
Riva tells the Enterprise crew to leave him on the planet. He will teach the people signing so that they'll learn to communicate with each other as well as him. Riker unsurprisingly doesn't want to do that, but Riva decides that he'll be fine and that seems to be that.The Enterprise leaves.


Oh Captain My Captain
While it's obviously not Picard's job to actually research all the guests on the ship, he (or Riker) should probably make sure someone has done the work to prevent embarrassing oversights. It seems people were dazzled by Riva's reputation and no one looked into the practicalities of his requirements of the trip. What if he'd turned out to need different gravity? Like that disabled woman that Bashir dates* in an early episode of DS9 (back when it was still trying to be like TNG).

After the death of the Chorus, Picard seems frustrated about dealing with an angry, shocked and grief-stricken man who he can't understand. He refers to Riva's attempts to communicate as "some kind of gestural language", or y'know, sign language. Further failures in research it seems, even after Riva came aboard no one thought to check what language he uses. Lucky they have an android who can learn multiple languages in a short space of time. Still someone in hospitality deserves a dressing down.**
Picard eventually grabs Riva by his head and shouts into his face. This is not helpful! Or necessary. We know Riva can lip read. This is definitely not a thing you should do to someone you don't know well, deaf or not.
Though Picard's anxiety does make some sense. His superpower is making speeches, so deaf people are kinda like his kryptonite.

Riker: Lover, Adventurer, Middle-management (Hen?)
Riker is concerned about Picard leading the team to pick up Riva (does he live in a bad system?). Picard amusingly calls Riker a clucking 'mother hen', which funny because it's true.
On the war-torn planet Riker dives into danger to protect Riva, despite being asked not to.

Blind Engineer
There is a touching moment of empowered disability between Geordi & Riva. Stuff about blessings and being special.
Pulaski offers Geordi a new way of having 'normal' eyes and vision. They're less effective than the visor but would be painless, though for some reason the procedure is a one shot and there's no going back. This is a reminder that Geordi's always in pain (which no one mentions fixing, though I'd have thought he gets some treatment for that).

Counsellor (not so) Pointless

Troi tells Worf his feelings in front of everyone on the Bridge. He contradicts her (which might suggest he doesn't want to talk about it - and she should know that), but she continues.
Riva is immediately attracted to Troi and asks Picard's permission for Troi to escort him. I'm pretty sure only Troi's permission counts here. On their date Riva and Troi are joined, peripherally, by the passion/libido Chorus member. Riva sends him away after a bit, and Troi is concerned about how they'll communicate, if only she had mental powers that could help in this situation.
I am very impressed that Troi steps forward to offer her aid in negotiations. Even if it's part of a strategy to help Riva, it's still a decisive and effective move. By getting Riva to talk about his work she's able to get him out of his funk and restores all his determination.


Security Breach
The entire first trip to the planet is a security nightmare. This is a place entrenched in war, an agreed ceasefire was recently broken and, much though these people are seeking help, it's obviously still dangerous and full of desperate extremists. Why is Riva more concerned with set dressing than security? Seriously he has no security besides grudgingly allowing Worf and Riker to stick around, instead he focuses on exact specifications for furniture and lighting. Riva mediates wars, and apparently brought the notion of peacemaker to the Klingons, but seems entirely unaware that he may face personal harm. What wars were these, battle of the bands?
The second trip to the planet involves even less security and no one to alert him to sounds. However the music is more optimistic and he's less cocky now, so it seems everything will be fine.

Death by Space Misadventure
Riva's Chorus.
All three are killed by a single laser, so presumably the extremist who fired the weapon was an amazing shot.
They didn't seem to have names, though a transcript I found describes them as Scholar, Adonis and Woman. So a designation, a name and a gender descriptor, hmmmm.
Riva ends up staying on the planet where they were killed, so I guess we can hope that he makes some memorial to them.


The End
Picard takes the time to thank Troi. He obviously had some staff relations training recently. 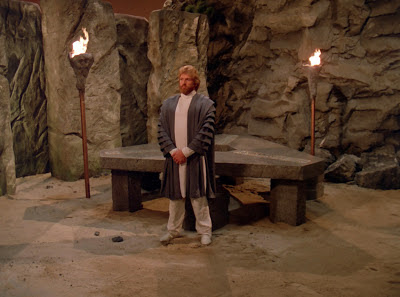 * Instead of 'dates' read: turns into a project. For that is how Dr Bashir handles romantic relationships.
** There must be a hospitality department, as they're constantly ferrying people about and have to deal with the needs of diverse species. Even Voyager had a hospitality department, albeit an unplanned one made up of  2 people, one of whom was deeply irritating.
Posted by Catherine Hill at 19:08