Back in my post about Eastercon last year I mentioned seeing author David Anthony Durham on a couple of panels. I resolved to read his fantasy books. Then my husband got me this book for my birthday. Then I didn't read it for months.
The problem with working in a library is that it is very easy to get distracted by books, and then you feel you have to read the library's copy quickly because you know someone else may want it. This means that -completely unintentionally- the best way for me to delay reading a book is to own it.*

After reading it a few months ago I didn't blog about it because I was getting stressed about stuff. At that point it seemed best to simply read things and not worry about coming up with anything intelligent to say about them. Now I'm feeling much better and would like to get back into talking about books. I can't guarantee it'll necessarily be intelligent though. 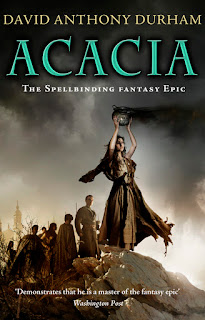 It took me a bit of time to get into the book, which is not unusual when being introduced to a new fantasy world (also there was the stress). The first section of the large book dealt with a plot against a powerful ruler, an advisor who isn't all he seemed and a hidden foe emerging. It was stuff I'd read before. However the later parts, which start nine years later, were something of a revelation opening up the world, characters and plot. After establishing a world and quickly changing its order, the author wastes no time in taking the plot where it needs to go. There are two major regime changes, and details of at least 5 very different cultures/ways of life, all of them are given the space they need but none are dwelt on overly long.

After the Acacian Emperor is murdered and usurped by enemies from the frozen north, his 4 children are spread across the empire. The eldest son, Aliver, is sent south to live in a village and spends his late-teens and early-twenties becoming a man in very different environment to the one he grew up in. He is the only one who was able to follow the plan his dying father intended. The eldest princess, Corinn, isn't able to escape the conquerors and is kept not-quite-a-prisoner by her father's murderers in the palace that used to be her home. She ends up being involved in a surprising and complicated relationship. The younger two both escape the invaders, but neither ends up in the lives secretly prepared for them. Mena is cast out to sea and washes up on a beach in a remote chain of islands that are only nominally part of the empire. There she is given the ceremonial role of the living goddess and lives apparently calmly in a temple until a man loyal to her father and brother finds her. Dariel, the youngest, is rescued by a palace servant and raised by him to become an ingenious pirate and a leader. He barely remembers his life as a prince, but his beloved guardian convinces him to join his brother's fight when the time comes.

The book not only follows the 4 Acacian heirs and those who serve them, but also the Mein who conquered the empire from the north and have generations of reasons to hate the Acacian dynasty. This is a story that has definite sides, but which shows the complexity of the situation, with each character having good reasons for what they do and how they are. Ancient, magical legends turn out to have truth in them, although it's clear that they have been retold and reshaped over generations to fit the agendas of the powerful. Early on the Empire is shown to be rotten to its core, a situation that the emperor regrets but doesn't get round to changing. The invaders may claim revolution, but their leader finds that his hands are tied by powerful and mysterious forces from the other side of the world, just as the previous emperor's were. The exiled heirs set themselves in opposition to the invaders and claim that they will truly change their father's empire (as he'd intended) but Corinn has seen the mechanisms of power and knows that nothing is quite so simple.


There is much online discussion at the moment about diversity in fantasy. A lot of people, quite rightly, want to see fantasy worlds that break out of the traditional (perhaps stereotypical) settings based on pseudo-medieval Europe and populated largely by white men who are unquestioningly the dominant force. Most of the arguments I've seen against such diversity seem to fixate on how it is incredibly unrealistic to have worlds dominated by female/non-white/queer people. This argument seems rather laughable when talking about fantasy. Of course the genre is excellent for escapism (though I don't see why such escapism shouldn't be comfortably available to all who seek it), but it's also good at positing changes to the world in which we live and presenting how these might work.

The world created in this book has some geographical similarities to our own, and includes the diversity that goes along with that. The Acacian dynasty rules from an island that's roughly equivalent to the Mediterranean. The Mein come from harsh frozen lands in the far north, they are blonde and fair-skinned and also a very tightly-knit and controlled group. The Mein women who live in the conquered island palace have to wear hats and veils to protect their skin from burning, while Corinn as an Acacian native is perfectly used to the climate. Aliver is sent south to Talay, a large southern continent that is akin to Africa. He is much paler than everyone else in his new community, something that he felt very self-conscious about during the early years of his exile.
Race doesn't seem to be used as a source of prejudice in the Acacian Empire, the emperor trusts his heir to an ally in Talay and seems to feel equal responsibility for all his people. After the Mein invasion there is understandable tension between the conquerors and conquered. The book makes clear that this is a divide that isn't simply along racial lines, and from the Mein point of view it's the ruling dynasty that deserve punishment. When the exiled heirs start their revolution they do it not just for their fellow Acacians, or for the communities they've been living with, but for the whole empire. There is an impressive scene where the unity of the different groups and factions that make up Aliver's army is presented in a very stark and powerful way.
I liked was the ancient legend that different races were imposed by the Creator to see if humanity could appreciate their similarities and live peacefully despite physical differences. When it became clear that they couldn't the Creator turned his back on the world and left the different races as a curse on humans for their short-sightedness and aggression. This creation myth acknowledges racial tensions without casting guilt, blame or prejudice on any particular group. Humans are all flawed.

* Unless it's a review copy, I hasten to add. Obviously in that circumstance you may own the book but you're obliged to read it as quick as possible so you can report back in a timely manner.
Posted by Catherine Hill at 16:06