First Scene
A glamorous blonde woman is interviewed for a TV spot about her new book, which details the extensive cosmetic surgery she underwent. Her former plastic surgeon/lover is brought on and angrily claims she lied about him in her book.

2) Zola Zbezewski - a much modified model. 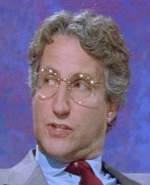 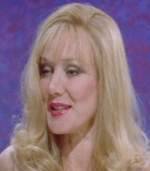 What's weird
1) David Curchin was shot through the peephole of his front door, killing him instantly. An earring with Zola's DNA was found at the scene though she claims it's not hers. Her daughter, lover and manager all say she didn't do it.

2) Zola's body falls out of Maddy's new wardrobe just after it's carried up to her 4th floor flat. The wardrobe was definitely empty before being taken up the stairs.

Dragged In
Maddy has a lunch meeting with her publicist Barry. She spots a wardrobe in a shop across the road and nips off to buy it. While she's gone Barry takes a call on her mobile. It's Zola's daughter, Victoria, hoping Maddy can clear her mother of David Curchin's murder.
Jonathan asks about the case when he sees Maddy, but isn't actually involved until Zola's body impossibly falls out of Maddy's wardrobe and she calls him for help.

Theories
1) David Curchin must have samples of Zola's DNA, could that have been put on the earring to implicate her in his murder?

2) Zola's body is somehow put into Maddy's wardrobe to warn her off the case.

Further Weirdness
1) Maddy is walking in Zola's garden with Victoria when they find a camcoder left by a peeping tom who has been filming the house. The footage in the camera shows Zola walking through the house and channel-hopping on the TV, this provides her with an alibi for the night of Curchin's death

2) Zola was hit on the back of the head with a blunt instrument. Blood-stained iron piping is found at her home by the police, meaning that either the murder weapon was taken back to Zola's house, or else her body was transported to Maddy's flat. 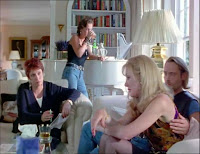 What Maddy did
Maddy sees the less confrontational version of Zola's TV interview, gets grossed out by the talk of fat relocation, and channel surfs for a bit. This confirms what's on TV that evening.

She agrees to look into Zola's case after hearing from Victoria. She finds Zola's household a bit odd as Zola and her 20something daughter share a pretty-boy, Scandanavian swimming teacher as a lover. 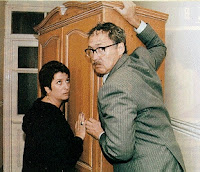 Naturally assuming that the recording clears Zola, Maddy gloats that she has solved a mystery without Jonathan's help.

Maddy gets a recent blind date, who she was not attracted to at all, to help her move her new wardrobe up 3 flights of stairs. It was fortunate he stopped by just after the wardrobe was delivered, and Maddy is nothing if not opportunistic.

Finding Zola's body is a shock and naturally Maddy calls Jonathan for help and support, but it just makes her all the more determined to figure out what's going on. 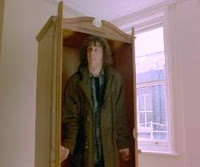 Jonathan confirms the wardrobe is solid. He notes that a pipe on the outside of Maddy's building has been bent and that flowers from a downstairs neighbour's window box have fallen into the rubbish below. Maddy mentions that she had a phone call just before the wardrobe was delivered, but didn't feel like answering. Jonathan uses call return to find out who phoned her, but there's no number, meaning it could be unlisted or a mobile.
Looking at the tape that cleared Zola, Jonathan suggests that there's significance to the fact that it's a panning shot (camera stationery and swivelled to follow action) rather than a tracking shot (camera moved to follow action). He digs around in the rubbish outside Maddy's building, and discovers a tape that explains everything.


Whodunit?
1) Zola killed David Curchin as it was clear he wouldn't leave her alone. The earring was hers all along.

2) No one. Zola died by accident. The iron piping was disturbed by builders at her house and fell on her head as she was leaving, giving her a concussion.

Howdunit?
How Zola murdered Curchin was plain, a gun to the peephole and a shot through the head.

How she faked her alibi and ended up in Maddy's wardrobe was more complicated. The earring was damning evidence, but Zola's devoted manager Sam Brickman had an idea. He gets a tape showing snippets of programming from the night of the murder. The peeping tom problem had already been reported, so Brickman arranged to film Zola's mocked-up alibi. As a short man he had to stand on a box to film over the garden wall, which is why the camera doesn't move. Then the tape and camera were planted in the garden for Maddy to find.

When Maddy took away a copy of the tape Zola and Sam quickly realised she'd been given the wrong one, as they carelessly left the incriminating, channel flipping tape lying by the video player. They were in such a rush that Zola didn't stop, even after a falling pipe hit her on the head. Sam called Maddy's flat from his mobile to check if she was home, when she didn't answer Zola went in to switch the tapes. What happened next can't be known for sure but Jonathan makes a good guess. Zola climbed from the landing window into Maddy's flat, which explained the bent pipe. After switching the tapes she dropped the incriminating one into the rubbish below, knocking down the flowers. Maddy returned to the flat unexpectedly, and Zola was trapped. When the empty wardrobe slid past the door she hid inside. While she was in there the concussion took effect and she died, to fall out when the door opened. 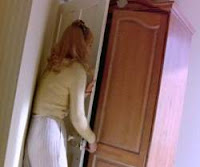 What's Adam up to?
Adam doesn't actually appear in this episode, but Jonathan phones him to discuss progress on an elephant levitation trick. It turns out the elephant is distressed by the trick mechanism and so the theatre smells dreadful. Later, at the theatre, Jonathan learns that the elephant had a heart condition and died during a performance. Getting the dead elephant out of the theatre is proving difficult and the smell is getting worse. At the end of the episode Jonathan and Maddy are shown returning from the elephant's funeral. 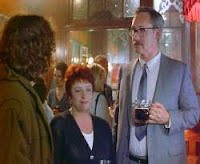 That Jonathan and Maddy Thing
Maddy arranges for a blind date to meet her in the pub next to the theatre Jonathan is working in. However when he arrives it's clear that the photo he sent her was rather out of date. Shelford explains that Maddy responded to his newspaper ad. Jonathan guesses that Maddy arranged a date to make him jealous, though it's backfired thanks to Shelford's advanced years. Maddy hotly denies this, though it's clearly true. 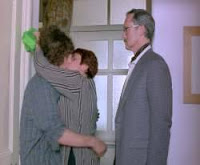 Shelford continues to show up, and though Maddy makes it clear she's not interested he seems unable to grasp this. Eventually she tells Shelford she's sleeping with Jonathan. Maddy gives the trick designer an embarrassingly lengthy kiss after he unwittingly walks in on the conversation. It still takes Shelford a while to leave.

At the end of the episode an angry woman approaches Maddy and sticks a high heel up her nose. She turns out to be Shelford's wife, warning Maddy off. Jonathan then, slightly smugly, reveals that he noticed Shelford had a tan line suggesting a wedding ring. 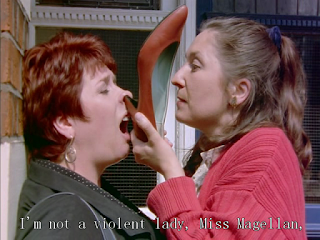