A Matter of Perspective


What Happens
Picard is in an art class, Data gives his painting a bad critique. The Enterprise goes to pick Geordi and Riker up from aspace station where they were visiting a scientist who was working on a new energy source for the Federation. Geordi returns alone and says the scientist wanted a word with Riker, he seems kinda awkward about it. When Riker tries to beam back there's a problem, then the space station explodes. Riker is safely beamed aboard and says the scientist was the only person on the station when it blew up. He's in a bad mood and is reluctant to tell Picard what happened. 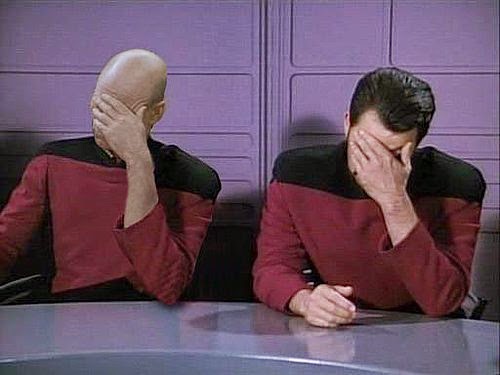 An investigator from the nearby planet beams aboard and tries to arrest Riker for the scientist's murder. Picard negotiates with the investigator. Riker can only be extradited to face local justice if Picard allows it. The Captain insists that the investigation is carried out on the Enterprise so he can examine the evidence and make an objective judgement. The witness testimonies are viewed in a modified holodeck. Riker says the scientist's wife tried to seduce him, he refused but the scientist walked in at a bad moment and got angry. The scientist's wife claims Riker tried to force himself on her and was angry when her husband came in and stopped him. The scientist told his assistant that he walked in on Riker and his wife kissing, then Riker threatened him. The investigator has evidence that as he was beaming away Riker fired a phaser at the lab equipment, blowing up the station. Riker denies the allegations against him. Picard doesn't believe the accusations, but cannot use personal feeling in his decision and fears there's little evidence that Riker is innocent.

Meanwhile unknown radiation burns small holes in bits of the ship. Data, Geordi and Wesley investigate. They think it has something to do with the scientist's work and his generator on the planet. When they figure it out they can prove Riker's innocence. Picard takes on a defense role and uses bits of the different holo-testimonies to show that the scientist was unhappy about the visit and wanted to make profit from his work. Geordi suspects he was trying to weaponise the energy so he could sell it and feared the Federation were suspicious. The energy (which has been reacting with the holodeck and burning holes) is used to demonstrate that the scientist tried to kill Riker while he was beaming away -to make it look like a transporter accident. The energy bounced off the transporter beam, hit the equipment, and exploded, which is why it looked like Riker had fired a phaser. Geordi also proves it with numbers, or something. The investigator accepts this, apologises to Riker, and leaves. 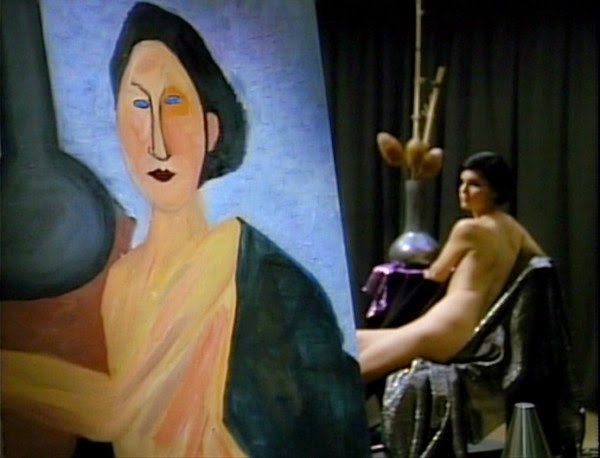 Picard is in an art class painting a nude model. Possibly to balance John de Lancie's mid-air nudity in the previous episode, this lady is also clearly naked and we see that from more angles, though it's an art class so I guess it's more tasteful. Data delivers a message and Picard suggests the android examine the paintings. The Captain isn't happy about Data's opinion of his "haphazard melange of clashing styles."
The episode puts Picard in a judge role deciding Riker's fate based on evidence rather than personal feeling. As ever Picard's ethics and commitment to duty are at the fore He's careful to be very appropriate in his role, not talking privately to Riker and enlisting Troi to help him. Picard acknowledges that despite knowing Riker would never do what he's accused of he may have to send his first officer into a situation he cannot escape.
When crew investigations reveal proof of Riker's innocence Picard is able to take on a defense role as he did in The Measure of a Man. He uses the holodeck evidence, bits of all the previously seen testimonies -as well as his speeching powers- to suggest what really happened in the space between the conflicting versions of events. 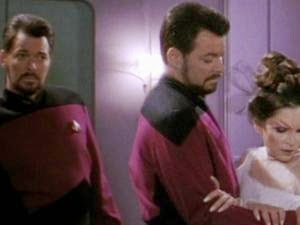 Riker is surprised and angry when first accused, but once he's accepted the situation he is brave and dignified Shades of Gray. He's mostly able to remain calm and serious, but loses his composure when he feels he's being slandered, most notably when the scientist's wife accuses him of trying to force himself on her. He's furious at being accused of attempted rape, and it's notable that he's the only one to call it that. From what we've seen of Riker his treatment of women is always respectful (he's the only ladies' man TV character I have no issue with in this area) and so his shock and anger make sense. There are other issues with this scenario, which I'll get into, but Riker handles it fairly well considering.
in the face of a possible murder trial. It mirrors his bravery in

Does Not Compute
Data compares the paintings of the 2 random crew members in art class to other artists/styles. He seems aware that his analysis of Picard's painting is not complimentary as he hesitates, only giving his analysis after Picard has specifically asked for it. Perhaps this is a sign of Data learning more tact? Then again after Picard has irritably told him to stop Data offers help in that entirely guileless, oblivious way of his, so maybe not. Data is often used for comedic moments, but those moments don't always tie into his character development.

It's Not Easy Being Troi
Troi can't tell that the scientist's wife is lying, even though she knows Riker would never do what he's
accused of doing. This is because the woman is telling the truth as she remembers it. This may be a glimpse into the problems that Troi faces when using her powers - problems which I had dismissed up until now. I assume that this is what Troi means when she says things are confusing or muddled. Troi can apparently sense deception, but if someone fully believes what they are saying then she's of no help in determining objective truth. Though the message of this episode seems to be that objective truth is a slippery thing indeed, even where it exists.

A Matter of Perspective?
The focus of this episode is how different people's versions of events can vary drastically. It's an interesting idea and one well suited to TV storytelling, I've seen it used effectively on various shows. The point is that there's no such thing as a reliable narrator, every story is filtered through someone's perceptions - especially our own. 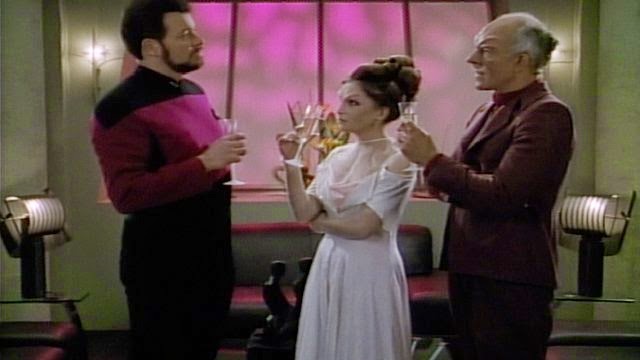 I'm concerned by how different Riker's account is from the scientist's wife's story. Not just the differing details of who said what or who closed the door -our memories can be bad at accurately storing that kind of info- but the whole tone. In one version a bored wife actively seduces a guest. In another an imposing guest tries to force himself on his hostess. Obviously we are meant to believe Riker's story, though I wouldn't be surprised if he had looked at her more than he consciously realised. But if we believe Riker's version we are immediately assuming that this woman remembered her failed seduction as an attempted assault, that is what the show tells us. I find this problematic, if only because women are so often not believed when it comes to stuff like this. They're told they've imagined things when men invade their personal space, made to doubt themselves and second guess their experience. Surprisingly little weight is given to what Riker supposedly tried to do, he seems to take it more seriously than anyone else. I think the episode didn't want to get bogged down in that when the murder of the scientist was the focal point. Still if someone's going to mention attempted rape it seems like that should be worth addressing.


Staff Meetings: 0
When Picard asks about what happened on the station Riker doesn't want to talk about it. When the investigator comes aboard Picard suggests Riker tell him what happened before their guest arrives at the Bridge. The scene cuts away, so we don't know if Riker said anything to Picard, but it seems like he didn't. After the investigator has gone Riker asks for a private word with the Captain, but Picard has to refuse because at that point it wouldn't be inappropriate. Too late, Riker. 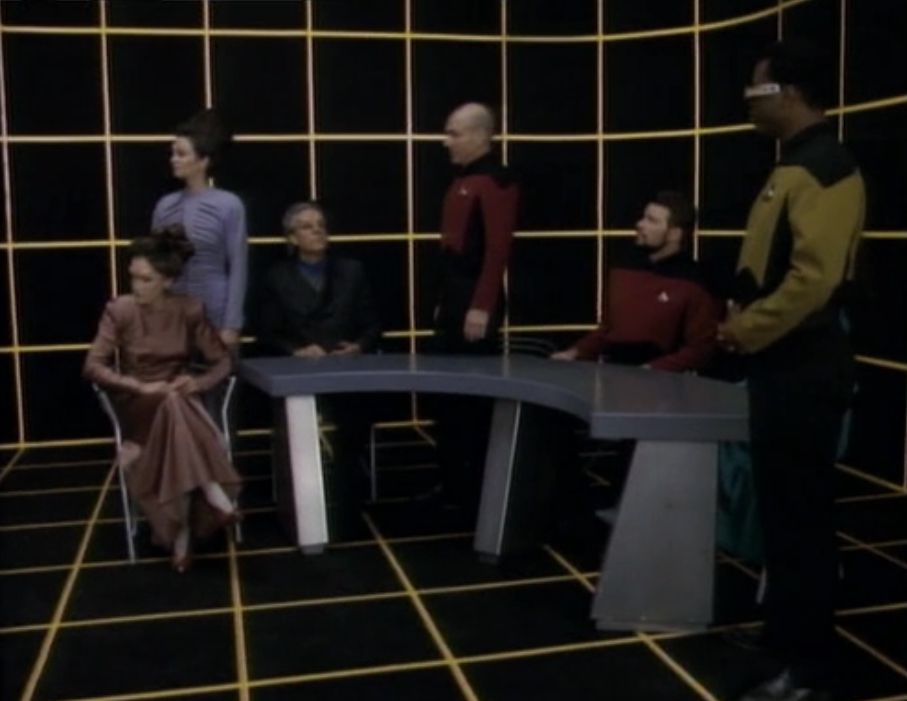 Picard asks Data about using the holodeck so the investigator can conduct his enquiries on the ship. Data says it will require extensive modifications, but can be done. Just over 18 hours later not only can the holodeck exactly replicate the interior of an exploded space station, it's also able to display visual versions of several people's testimonies, all with a 8.7% margin of error. That's impressive, but it is that future I suppose.
Then it turns out that -due to technobabble I didn't understand containing numbers for added veracity- the holodeck version of the scientist's lab performs the exact same function as the lab itself. That's right, the computer generated version of a thing performs the exact same function as the thing itself. Meaning you don't even need an actual lab, just an image of one - that is enough for science to happen. The holodeck uses the power from the generator on the planet to burn holes in the bits of the ship. It's lucky that they happened to have the lab-scene running at those particular points, otherwise Riker might never have been proved innocent. At the end real energy from the planet interacts with the fake holo-lab equipment to create a phaser-like beam that somehow still bounces off an image of Riker transporting and then blows up the entire simulation (except the furniture people are using). but doesn't burn a hole in the holodeck wall. When Riker points out that the holodeck can't create things that are dangerous (oh Riker, really?) Geordi says the equipment was basically a complex set of tubes and mirrors, which apparently answers Riker's point. If they're doing it with mirrors then I think that means it was all a magic trick.


The End
Picard is cheerful and asks Riker to get them under way. Riker gets to say engage. 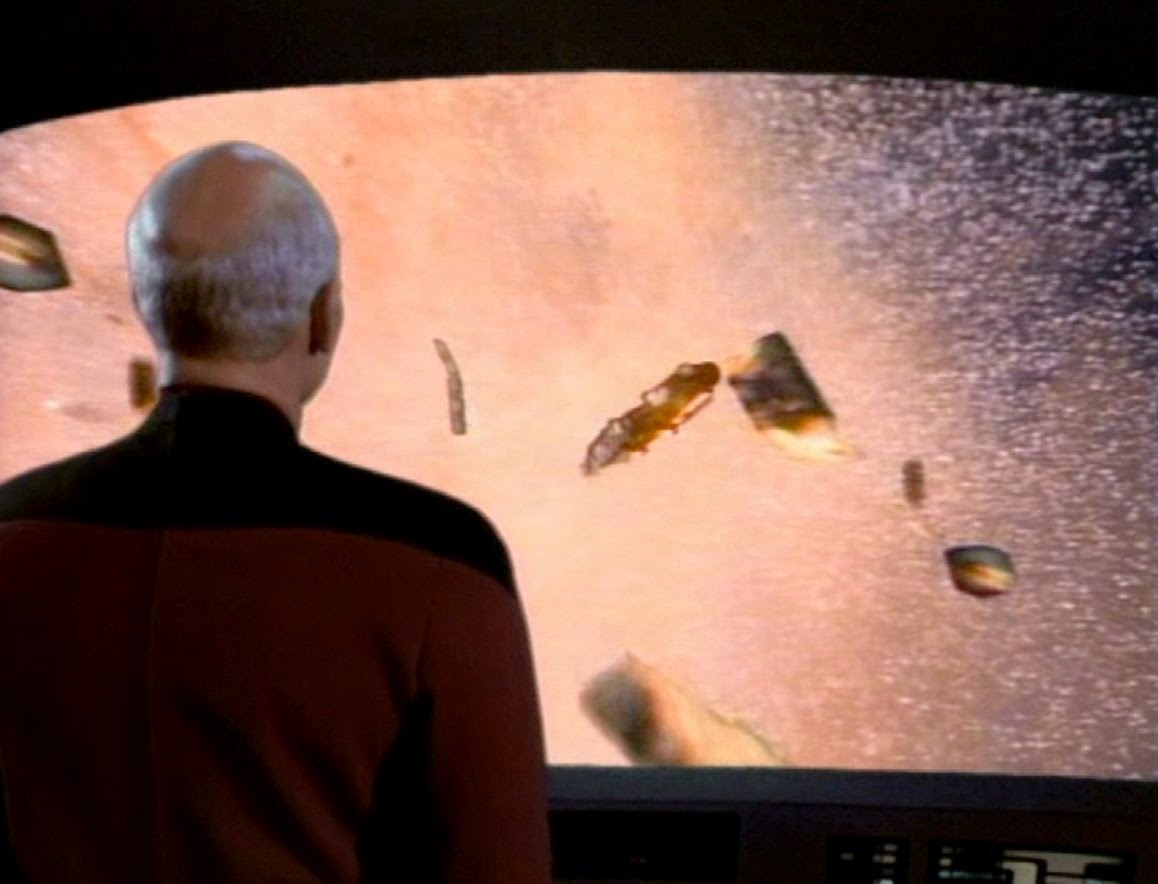