Guardians of the Galaxy

Half the internet has been talking about this, but generally politely enough not to be spoilery in public places. I shall try and keep to this admirable trend and will put a spoiler warning before revealing anything outside the trailer. 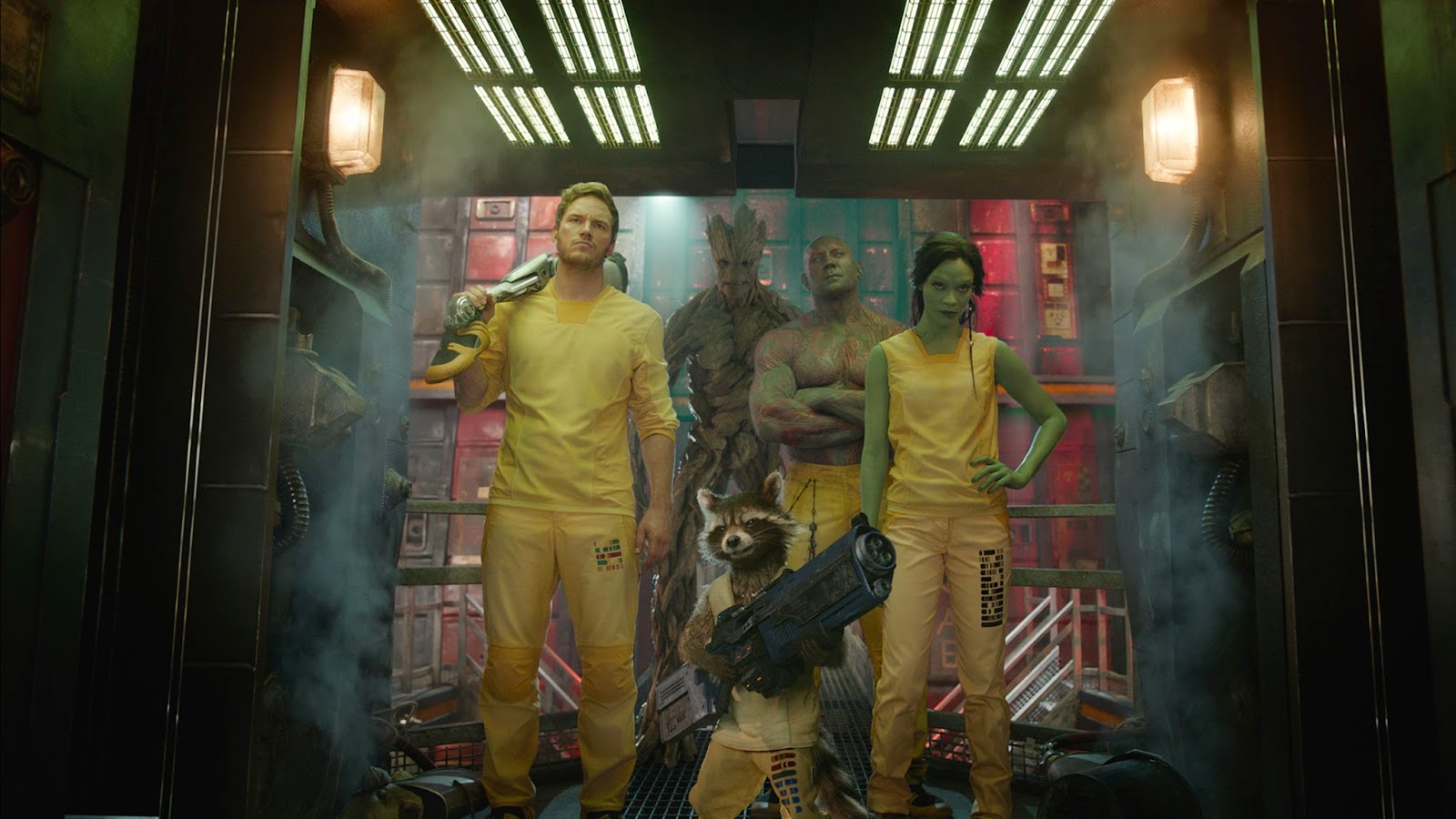 Like most of people I enjoyed Guardians of the Galaxy and thought that Marvel and Sean Gunn did an excellent job introducing a little-known ensemble to the Cinematic Universe and broadening it's cosmic side. It also feels like this would be a good starting point for people who have not watched the rest of the Marvel films, as the bulk of it is entirely new.

The film is a lot of fun and uses humour well, mostly creating funny dialogue and moments through character interactions and situations, rather than laughing at them or mocking them. There were other emotional beats that worked very well and had impact without feeling as though the film was purposefully playing with your emotions. Initially I wondered whether the film might not have a bit too much background detail with different groups and their agendas being introduced, but actually after the set-up it works well and you're pulled along for the ride. 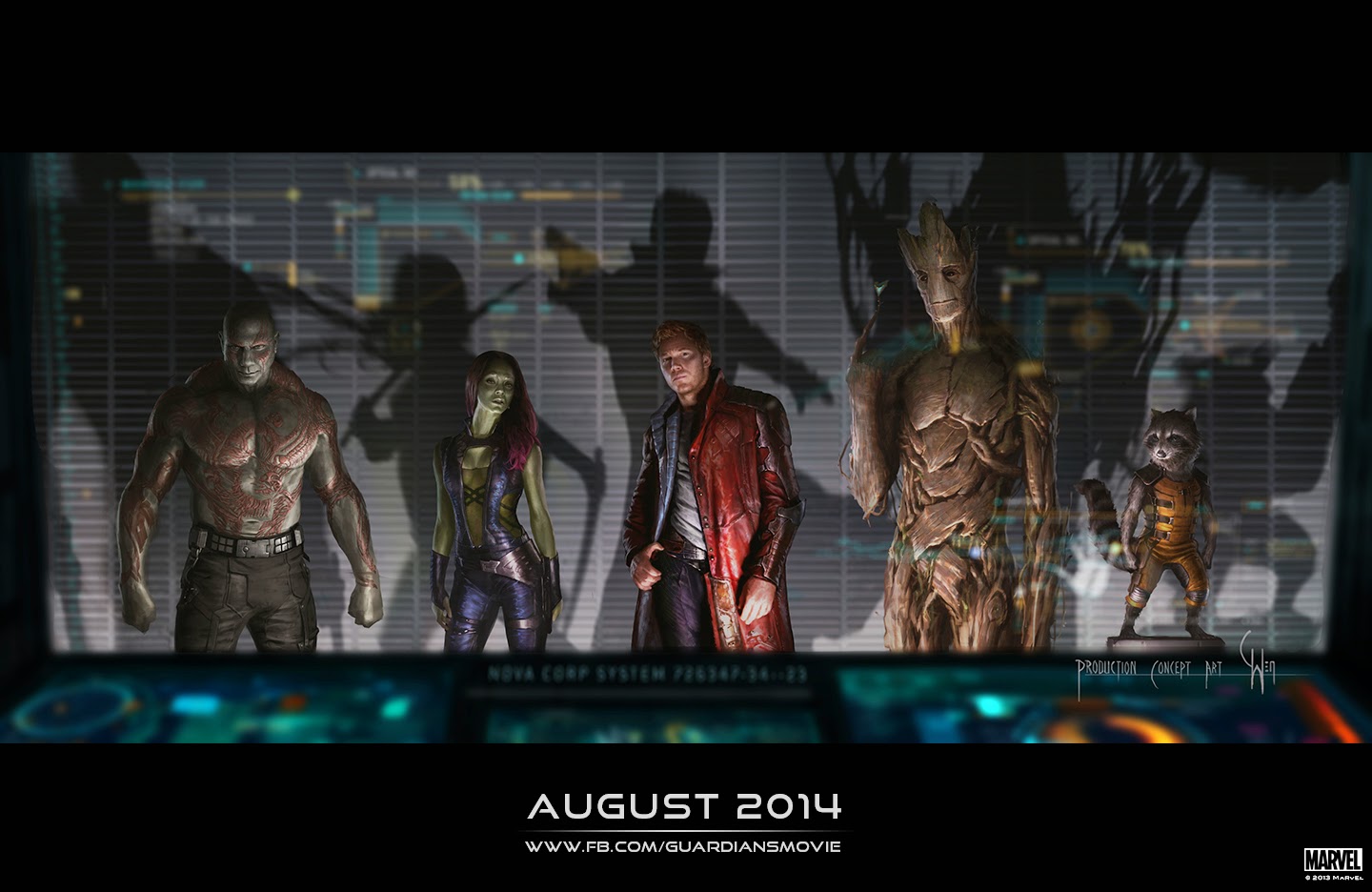 The central characters all work well together, becoming a team and friends almost in spite of themselves. Groot is both terrifying and adorable (even before the bit at the end), and I kinda want to see him fight the Hulk. Rocket is excellent, the humour not being because he's a talking racoon, but because he's a cynical, sarcastic person. And it makes sense that's he's that way when he's the only creature of his kind in existence. Gamora's background could have been fleshed out more as it relates to the central conflict, but she gets some really good scenes and lines and I didn't notice her being used specifically as eye candy.

Drax wasn't put in the trailers much, probably because most of his lines are hilarious but only in context. Having a literal character be everyone's straight man works well. I did feel it was a bit bad when he called Gamora a whore. I see how the joke worked there, but since he doesn't understand metaphor it doesn't make sense he'd call her that (bitch would've made sense, or y'know a non gendered insult). Other than that brief moment though he worked really well, his motivation was pretty standard but he fit well into the weird group dynamic. 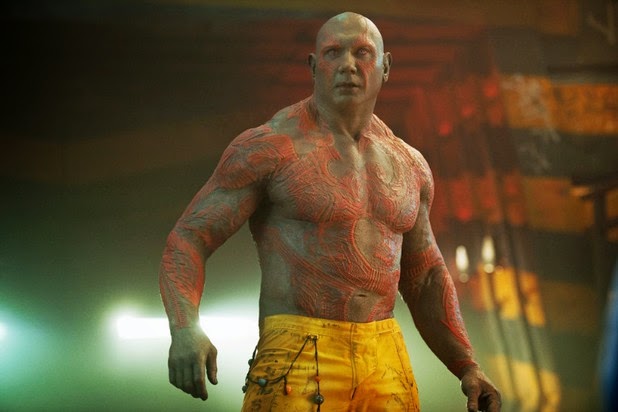 Star Lord's backstory is kinda sad and he's grown up as a bit of a space rogue while somehow maintaining a strong vein of childish naivete. He steals and runs with smugglers, but he also believes he can save the day and loyally looks out for his friends. I think my favourite moment was Ronan's face when Star Lord started dancing at him.
Also, although his grandfather was only on screen very briefly, I couldn't help but feel sorry for him. That actor normally plays unsympathetic rich guys in things I've seen, but here he seems to be a good normal man. He obviously stood by his daughter, who got pregnant and claimed an alien did it (in the late 70s - early 80s). The loss of her and his young grandson in the same night must have been terrible. If Star Lord ever returns to Earth I hope we see him again. It's a small detail but one that stuck with me.

The soundtrack was good, even though I wasn't familiar with all the songs. I really liked that the soundtrack had such a link to the story and was more than just incidental music. I also loved that the build up to the big battle and the start of the fighting was to Cherrybomb.

The main link with the rest of the MCU is Thanos, the baddie revealed in the after-credits scene of Avengers. There's also the Collector, who appears in the after-credits scene of Thor the Dark World. This shows that all the cosmic craziness is linked to Asgard (the most mythic/magic of all the Marvel franchises), even if it doesn't seem to be part of the Nine Realms. Thanos mostly appears as a terrifying force in the background, his role stepped up from that of Loki's mysterious backer in Avengers. The real antagonist Ronan is not fleshed out much, he has little more backstory than Christopher Eccleston's angry dark elf* in Thor the Dark World, he wants to destroy all the things, for reasons. The trailers and publicity suggested that the main baddie would be Nebula, however she is not particularly well-used in the film and mostly has the role of chief minion. It might have been interesting to explore more about her relationship with adopted-sister Gamora and their messed up family. 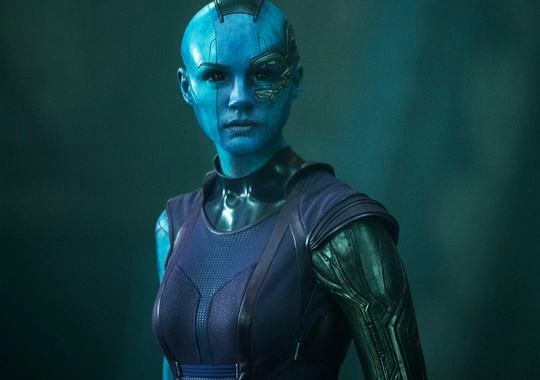 The scenes with the Collector signal a bit about where the wider MCU arc is going. My husband has been mentioning Infinity Gems and the Infinity Gauntlet to me since the tesseract appeared in Captain America, here we actually get told outright that these things are linked and that someone at some point is going to have a very powerful shiny glove.

The only bit that wasn't great was probably the after-credit scene. As this is a franchise starter and separated from the other bits of the MCU it makes sense they didn't drop hints about another franchise (at least I hope they didn't). Still, I think there's sufficient dislike/ignorance of Howard the Duck that including him at the end did them no favours. Bit disappointed by it if I'm honest, I'm used to being amused or intrigued by the after-credit scenes and this one didn't do that.


* Eccleston's Dark Elf King was really just a version of his two dimensional Rider character in The Dark Is Rising (a terrible adaptation of a good fantasy book) except with more makeup and a spaceship instead of a horse.
Posted by Catherine Hill at 17:18