As I mentioned in my earlier post about LonCon 3, while I was at the convention I saw a performance of The Anubis Gates, based on the book by Tim Powers. I really liked the book, it was the first Tim Powers book that I read and I was very impressed, as you can see from my previous review. I knew I had to see the performance.

There was an enormous queue going in and the start time was pushed back quite a bit. However by the time myself and my husband got in we were able to sit about two thirds back, and the rear third of the massive auditorium was empty (this was the 2nd largest space used by the con). I expect many people got put off by the epic queue, which was obviously very long and thin, whereas the space we were queuing into was pretty wide and fit more than you'd think.

I'm going to put a spoiler section at the bottom, where I can go into details about the story. The book is great, so I don't want to spoil anyone who hasn't read it yet, but is hopefully encouraged to do so. The upper section will be general thoughts about the production. 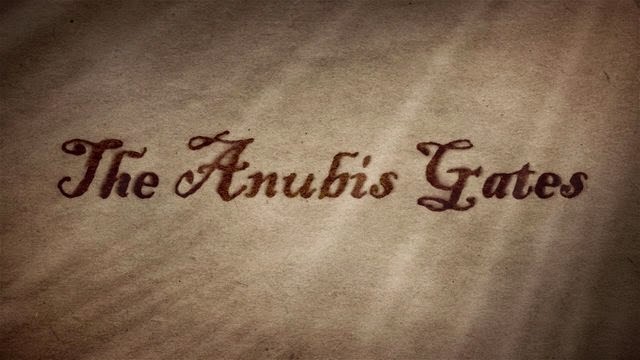 The performance was not what I expected, but I enjoyed it. The set was very minimalist, black backdrop and a single table, and seemed at odds with the enormous space it was being performed in. The costumes were the main thing that evoked a sense of time and place. I felt that the production would have worked better in a smaller space, as the atmosphere and performances were diluted, but it's likely that the production was designed for a more intimate space, or else one within a traditional theatre set up. The stage and the action (when it went into the audience) was filmed and projected onto two huge screens either side of the stage, to allow people in the back some idea of what was happening. These screens were occasionally used to project other images relating to the action, and these bits generally worked well. There were also various puppets and some shadow play used sparingly during the production. These looked fine, but the shadow show was a little lost given the size of the venue. Plus they were used in parts of the story that didn't make as much sense because there was little explanation within the show (I'll go into more detail about that below). I also felt as though there could have been some more visuals to signify things, especially times when people were using magic. There was a lot of stuff done with body language and gesture that might have been flagged up more. Then again that could be another factor that would be improved in a smaller space.

I wondered how a story as complex as The Anubis Gates would fit into a stage production. A lot of the detail in the book is the historical setting, which can be quickly created/evoked in a performance using visual shorthand. The story was reduced mostly to conversations between the characters, usually in twos, or else someone's internal thoughts being performed as a monologue. This was fine and allowed for the basics of the story and the experiences of the characters to be shown and mostly explained. The performances were good, with the personalities of the main characters coming through well. The stage was miked but unfortunately the individuals weren't, meaning that when some characters left the stage and went amongst the audience they were hard to hear. The strong performances are really what made the show, as it relied so much on character interaction. Especially important in a play that features body-swapping, and the various actors that played multiple characters used accents and body language to make clear who was being who at different times. The humour of various scenes was good, and again relied largely on the excellent interactions and performances, it was all tied into the story and characters without gimmicks. I laughed a fair bit. The woman that played Jacky did a wonderful job, as did both actors who played Brendan (amongst other people). I especially felt that chemistry between the characters in the final scene was excellent and left me feeling very positive.

The production was fun with good performances and it simplified the story fairly well. It was let down by the massive space, which didn't seem to have been fully accounted for. The humour and drama worked emotionally. I really want to reread the book now. Also I've been humming bits of 'Yesterday' for over a week.

It's been some years since I read the book, so I'd forgotten various bits and pieces, though I now want to reread it. I watched the play with my husband who hasn't read the book and it was interesting to see what he picked up. I managed quite well already knowing the plot and being able to fill in most blanks, whereas he enjoyed the play but realised there was more to the story that he didn't see.

The explanation of the time travel was clear and established early on. The situation with Dog-faced Joe and the body-swapping was also made clear. Of course this isn't surprising as these are central to the plot and the character's experiences. One of the transformation sequences were Dog-faced Joe bodyswaps wit Brendan had an amusing projection on the screens, where the picture morphed between images of Chewbacca, the actor playing Brandan, a bearded man and the Cowardly Lion from the Wizard of Oz.

All the other magic and supernatural stuff was very much left in the background. Doctor Romany is present as a malign force, however it's not clear what his connection to anything is. Horrabin is almost entirely removed and is referred to more than he appears, making his actual appearances confusing. There's little sense to the spoonsize boys, which were puppets that went into the audience. There's no sense of the other stuff that Horrabin is involved in. Of course this does mirror the experience of Brendan, who spends the early part of the book utterly lost and unaware of what's actually happening. Plus I seem to recall the book didn't overtly explain a lot of things, but gave you various hints. These may have been difficult to get across in the performance. I almost feel as though more of the wider magical stuff could have been safely cut from the play. The connection with Egypt and gods is never made clear, and although Brendan is taken there at one point my husband didn't know that was what happened. The Master appeared on the screens a couple of times as a doomy presence and another time is shown as a puppet, but the production doesn't make clear who he is. It's clear that he, Doctor Romany and Horrabin are linked, but the magicians' conspiracy is very much in the background of the performance. Similarly the journey further back to the 1680s was not clear to people who didn't already know the plot. This was a place where the magic could have been made more obvious.

It's understandable that a lot of detail was sacrificed to make the story suitable for performance. Focusing on principle characters and their experiences makes sense and it worked well. However this did mean that the references to wider story elements and background details seemed disjointed and almost unnecessary, if not perhaps confusing to those familiar with the story.
Posted by Catherine Hill at 12:36