After being in my new job for a week and a half I took some leave (starting on the busiest day of the year) for 6 days in order to attend LonCon 3, the 72nd WorldCon. Of course I 'd booked to go to WorldCon a year before I knew about the job, so it was really just lucky timing. 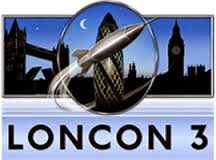 I have never been to a WorldCon before, so starting with the biggest one ever was a bit of an experience. I have never been to a convention for 5 days before, nor have I been to one in a convention centre before. I'm used to shorter cons in hotels. The ExCel Centre is half a mile long and so the c.10,000 attendees were pretty spread out (unless you wanted to get into a popular panel/event, in which case there were queues). It was tiring walking up and down the main concourse to get food, but at least there were a variety of food places that served gluten free food that I could eat.

Worldcon was an opportunity to meet up with people; friends I don't see often, online friends I've not met before, and friendly new people. I had a lot of great conversations with people. One of which was actually a recording of the Hugo-nominated Skiffy and Fanty Show podcast, which I won by donating to their fundraiser, so that'll be available sometime in the near future (watch this space). There are many people I only saw briefly, or didn't run into, but at an event so big that's not surprising. Plus it can take me a bit of time to gear up to being sociable, so I wasn't always being outgoing or seeking people out. Still I'm feeling good about people I did meet and talk to. Although it was a tiring event physically and mentally I felt re-energised creatively and I think that was partly due to the people I saw.

The programme contained many panels on a wide variety of things. A lot of interesting stuff was on offer and there was not chance of doing all of it. I thought I'd mostly planned it out beforehand using the excellent app available through the website, and had various exciting options for panels to attend. As often happens with the best laid plans there were adjustments and failures. These were mostly due to panels that were too full by the time I got to them, or to times when I was enjoying talking to people or was too tired to actually get to panels. In cases where I couldn't get into a panel there was always something else I could go to. I went to 11 panels and several other events across the 5 days, and they were all pretty good. There were a few that weren't quite what I expected, but none that I didn't get something out of (even the ones on Sunday morning when I was a bit of a zombie). Also, of the panels I went to, most had more women than men, and the rest were equal. I don't know if this was a coincidence based on the panels I was attending, or whether the con planned it, but I took it as an encouraging thing.

My programme highlights were:
I also saw a performance of The Anubis Gates, based on the book by Tim Powers. It was interesting, but I think I'll go into more detail about that in a separate post later.

I don't know if I will be attending another WorldCon soon, it'll depend on where it's held. I know that they are often very different as they aren't run by the same people, but I think I would be up for doing another one again.


My next convention will be FantasyCon in September. I fully expect it to be quieter and more relaxing, which will be fine.
Posted by Catherine Hill at 18:00