I have written the word Enterprise so many times in this post it has lost all meaning.

What Happens
Guinan introduces Worf to prune juice and tries to talk about his issues. A weird space-time anomaly is detected - one that is weird even for a space-time anomaly. Guinan senses a disturbance in the force. A Federation ship comes through the anomaly. The image flickers, the Bridge is darker and Tasha Yar is standing where Worf just was. Guinan is suddenly wearing a different colour and realises that everything has changed. Tasha identifies the ship from the anomaly as the Enterprise C. 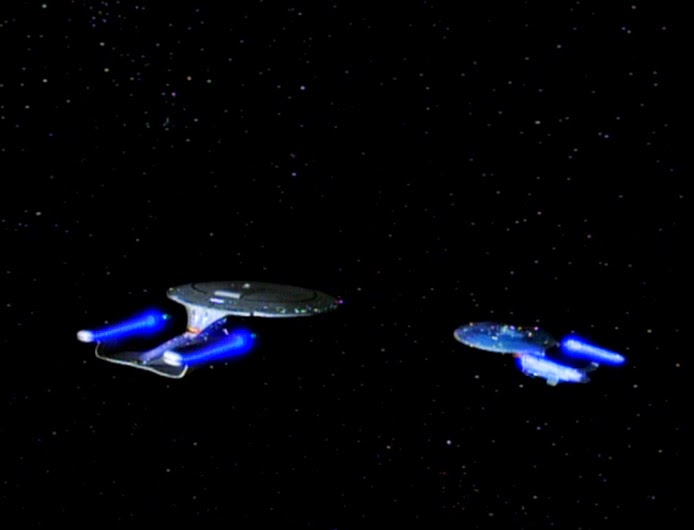 
Guest Star
Christopher McDonald plays the Helmsman from Enterprise C. He's been in so many things, including Flubber, Thelma and Louise, and Grease 2. I knew I recognised him, but had to check which things I'd seen him in. 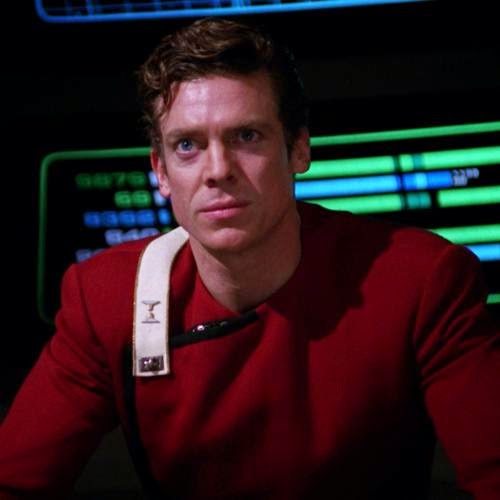 Oh Captain, My Captain
The alternate timeline Picard is a military captain, presumably rising through the ranks in a time of war when the Federation's priorities are defence and not exploration. He's alarmed by Guinan's suggestion that there should be children on the Enterprise. I agree. Just see how many times I used the Won't Somebody Think Of The Children heading in my posts on series 1 & 2, and most of those times it was Picard who seemed to not be thinking of said children. This Picard is tougher and even more authoritative. He briefs the senior staff on his decision, there's no discussion or collaboration. When Riker dissents Picard gets snappy and dismisses everyone. There's obviously little love lost between these versions of Riker and Picard. This guy kinda makes regular Picard look fluffy.
It is a bit odd that a starship Captain should base such a major decision on the advice of his mystical friend. On the other hand it is Guinan and she is awesome. 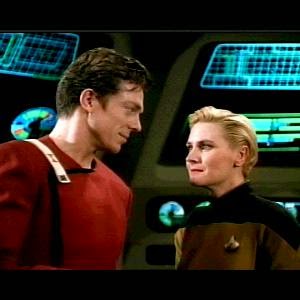 Tasha's relationship with the Helmsman from the Enterprise C develops almost in spite of her, she's showing him around and being formal - she is senior crew on a battleship after all. The Helmsman comes from a more optimistic time, when they left a peace treaty was being negotiated, and he is friendly with Tasha. They fall for each other quickly and up end saying goodbye a couple of times.
The important thing about this episode is that Tasha (and the show) gets to rewrite her death. Tasha was security officer and fits well in this military timeline, the fact that she died so pointlessly in Skin of Evil was a bit of a disservice to the character. In this version of events Tasha realises Guinan is weird with her and learns that she had an empty death in the other version of events. Knowing this Tasha asks Picard for a transfer, even though he's initially against it, because she wants to take control of her fate. She wants to help the Enterprise C (which only has one senior officer now) and if she does die she'll be doing it to fix things. 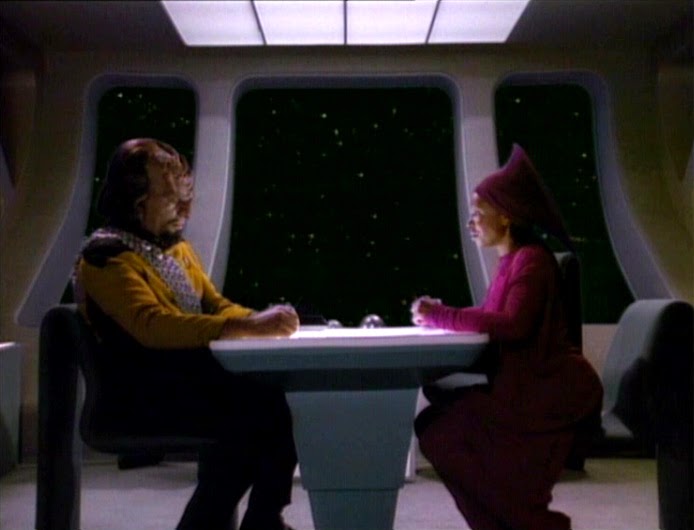 At the start of the episode Guinan introduces Worf to prune juice, which he calls "a Warrior's Drink", though that's not the line advertisers usually go with. Guinan observes that he's often alone and could try female company. Worf rather bluntly says that he needs a Klingon woman, as human women are too fragile (even for drinks, it seems). Guinan tries to convince him otherwise, and says various crew members would be interested. Worf is adamant that he's concerned for the safety of others and Guinan accuses him of cowardice.
Worf is a very repressed individual. His reaction to the half-Klingon, half-human woman from The Emissary, shows that. I think Guinan is partly right, that he's masking his fear and insecurity behind concern for others. Although a much later conversation from Deep Space 9 will reveal that Worf has childhood trauma which forms the basis for his fear of hurting humans and his belief in their fragility.

Guinan's initial heart-to-heart with Worf about his personal issues shows her usual role on the ship. She's the ultimate bartender, as well as serving drinks and listening she can anticipate what drinks you might like and what personal issues you might need discussed, all without being intrusive.
It's not clear whether she would have a similar role on the alt-Enterprise, since she knows she's not supposed to be there. Though Tasha knows her and says she's never seen her bothered by anything, suggesting Guinan is always herself. I'm pretty convinced that her people are something like a mix between Jedi and Time Lords. She's obviously able to sense timeline changes and holds memories from two versions of history. She's very honest, telling Tasha (who she's suddenly known for years) that the return to the other timeline will mean her death, and despite this Guinan knows it's still for the best to save the Federation and undo the war.
Whoopi Goldberg is God in the Muppet universe, as seen in A Very Merry Muppet Christmas Movie, because she's amazing.


Alternate Timeline
The alternate Enterprise D is darker, the walls are black, the displays are battle plans. The set builders clearly gave this a fair bit of thought. The uniforms are also different, so it's obvious when the timeline shifts back. 10 Forward is a bustling canteen rather than a relaxed bar. Tasha tells the Helmsman that the replicators are on minimum power and only give standard rations because as much power as possible needs to go to defensive systems. The sickbay is much busier with people waiting and announcements calling medical staff, it's a war hospital. Worf's absence makes sense here, but Troi is also gone, I suspect the mental health of crew is less of a concern in this setting.
We never see what happens when Enterprise C returns, but it must put things right. The change is that in the alternate timeline the Enterprise C mysteriously disappeared in Klingon space, but in fact they responded to a distress signal from a Klingon base and were aiding them when they were ambushed by Romulans. I assume the Enterprise C still gets destroyed, but the assumption seems to be that if they die aiding the Klingons it will be seen as an honourable act by the Empire.
I am a bit confused about why Captain Garratt and the Helmsman are so eager to return. It seems that the Enterprise C crew are all dismayed to be out of time and concerned about living in a world without their loved ones. At first this confused me, because they've only gone forward by 22 years and the bulk of their loved ones should still be alive. Then I remembered that the war has wiped out half of Starfleet and the Federation has been on a war footing for two decades so they may well have lost people

Staff Meetings: 4
1. Guinan tells Pic about her feeling that the timeline is wrong. He won't accept it at first, but he still values her opinion. He wants proof, but she can't give him any, it comes down to his trust in her.
2. Picard tells senior staff about Guinan's feeling and decides to do as she said and send the Enterprise C back. There is no discussion, it's just a briefing
3. Helmsman is going to take over the Enterprise C after the death of Captain Garrett as the last senior officer it's his duty.
4. Tasha requests a transfer to the Enterprise C. She has spoken to Guinan and learned that she dies pointlessly in the other timeline. Picard doesn't want to let Tasha go, but eventually concedes.

Death by Space Misadventure
The entire crew of the Enterprise C (except 125 survivors) died in an unexpected Romulan attack before the ship time jumps. 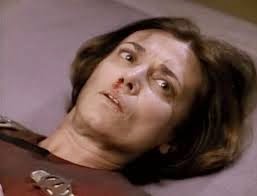 Captain Garrett died in an attack by the Klingons before the Enterprise C could return through the anomaly.

Commander William Riker died in the Klingon attack as the alternate Enterprise D defended the Enterprise C. He was apparently hit by rocks from an exploding console (I don't understand starship design). 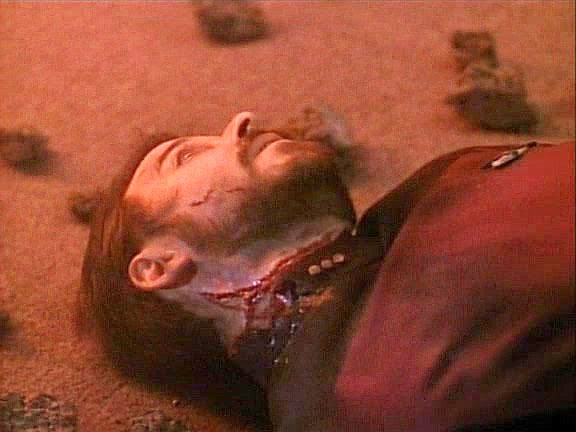 The End
As the Enterprise D is close to destruction the Enterprise C goes into the anomaly. We cut back to the familiar Bridge, Picard asks for a report. Worf says it looked as though there was a ship in the anomaly, but it disappeared. Guinan calls the Bridge and asks if everything is alright. Picard replies that it is, confused that she's asking. In 10 Forward she sits down opposite Geordi and asks him to tell her about Tasha Yar. 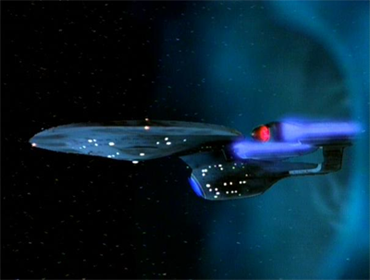