The Next Big Thing

I have been tagged in the Next Big Thing blog meme by the lovely Charlotte Strong. It's been doing the rounds for a while now and it's been interesting to read other people's responses (some of which I've linked to at the bottom of this post).
I hadn't really considered it getting to me. I feel quite touched but also a little daunted as this suggests other people are taking me seriously. Maybe that means I should start taking myself seriously?

I should clarify that in my case 'next' is probably misleading as I've not yet finished a novel length story. I've had a few on the go at various times over the last several years. For the purposes of this meme I'm going to talk about the story I've done the most work on.
So, watch me dodge questions like a politician faced with a microphone.

What is the working title of your next book?
Away with the Fairies
This is very much a working title. I'm not good at titles and have enough trouble coming up with them for completed short stories.

Where did the idea come from for the book?
I first dreamt about Auresimma in 2004 (I remember because I was doing exams at the time). There were 2 posh people looking at a painting of her and gossiping about her having an affair. I quickly had the idea of a murder mystery in a big country house, but with magic and fairies. I like the haughty, squabbling fairy royals in A Midsummer Night's Dream and had read a few books with these kind of fairies in (I've subsequently read more).

What genre does your book fall under?
Fantasy.
I'm not sure if it'd count as historical since it's set in the 1950s and people can still remember that.

What actors would you choose to play the part of your characters in a movie rendition?
Hmm... don't usually picture characters in terms of actors, but I've done a little thinking and online research.

Katie McGrath (from Merlin) suits Auresimma's colouration. Though I've not watched Merlin in a few years, so I can't speak to her acting abilities.

James Wilby could be Lord Michael, in fact now that I think about it he's perfect (though it took a bit of googling for me to remember his real name). He definitely has the right look and has done period, aristocratic and fatherly roles. 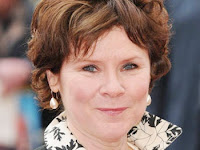 There are quite a few other characters I could try and cast; I'd need some aristocratic-looking fellas in their 20s and a young mixed-race woman. However I think that trying to do any more would mean me trawling through pictures of actors on Google Image for hours.
I'm not sure about the Fairy characters, it's probably best if I don't picture them as humans. They'd have to be played by tall, slim folk who could look a bit unearthly.


What is the one-sentence synopsis of your book?
A house party attended by Elven royalty and English aristocracy is interrupted by murder, the guests are spirited away to a magical land as the family are drawn into a conspiracy that spans two very different worlds.

Will your book be self-published or represented by an agency?
I'd prefer representation & traditional publishing as I have more understanding of that model and those are the books I usually read more of. Of course times they are a-changing and I guess I'll see.
I mean this is quite a while in the future as I have to finish the thing first. Which leads us nicely to...

How long did it take you to write the first draft of the manuscript?
It's a good question, I wish I knew.
Since the initial idea I've written 3 partial first drafts, in between writing other stories and a few major life events. Each time I've realised that I need a major change; like losing a crowd of pointless secondary characters, or changing the starting point, or (most recently) changing the ethnicity of a character meaning I need to do a lot more research.

What other books would you compare this story to within your genre?
Another good question that I feel unequipped to answer.
I suppose the story could be compared to any book where the mundane -or even repressive- in human society is brought into contact with the chaos and wonder of magic.

Who or what inspired you to write this book?
I've already mentioned A Midsummer Night's Dream, and I think Stardust by Neil Gaiman was an early influence with the fairy stuff.
The BBC4 documentary Consenting Adults, about the Wolfenden Committee and attitudes to homosexuality in the 1950s, was also something of an inspiration, especially when approaching the character of Farrington.

What else about the book might pique the reader's interest?
There's murder and magic, fairies and intrigue, hidden identities and family secrets.
There's also posh English people and the 1950s, both of which seem to be popular at the moment.

Now I'm supposed to tag 5 people to carry on the meme. However I'm not going to tag anyone as I'm pretty certain everyone I would normally tag has done (or been offered/tagged in) this meme already. So here are links to posts that have already been written. It's better this way because you get 11 and they're available right now.

Posted by Catherine Hill at 12:56 No comments:

Where Silence has Lease

Episode: s2, ep2
I think this episode is meant to show how great Picard is and how he doesn't back down in the face of difficult decisions, unfortunately it doesn't have much thought put into it. 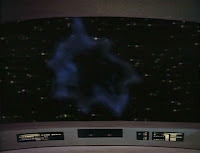 The Enterprise encounters a mysterious space-hole of unknown properties. Picard stops to investigate and the whatever-it-is envelops the ship. There is no way out, and attempts to navigate suggest that the space is curved somehow as the ship goes forward yet returns to the same spot. Various weird things happen: a cloaked ship attacks and is destroyed leaving no debris; a Federation ship appears but won't respond to hails.
Riker and Worf beam aboard the mysterious Federation ship. There are two identical, adjacent bridges, until a trippy moment when they discover that both bridges are in fact one and the same because space is being screwy again. A possible escape hole appears in the whatever-it-is, but Worf and Riker can't be beamed back onto the Enterprise until after the hole closes, then the mystery ship disappears. 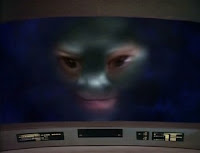 A being, which looks like a giant, scary face, reveals itself. It has been experimenting on them the entire time. Its next experiments will kill a third or half of the crew. Picard (and Riker) decide it's best to destroy the ship and kill everyone rather than let the being conduct its experiments. Shockingly this decision does not lead to mutiny or any complaints. The being sends images of Troi and Data to talk Picard out of killing his entire crew, but he's wise to its game. The giant face says it was all a test and lets them go. Riker and Picard stop the auto-destruct with ten seconds to go and the scary face lets them go back into regular space.


Oh Captain, My Captain
In this episode we are told that Picard is brave man and a good Captain because he's willing to kill everyone under his command. That's what the episode says, and it never backs down from this position to examine any of the issues involved. It's likely that Picard believes he is giving his crew a quick, clean death rather than leaving them to the whims of a strange power, but this is never discussed.
There is no farewell speech to any of the crew, which seems a bit cold and out of character. You'd imagine Picard would go out speechifying. 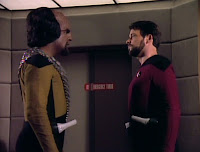 Riker agrees with Picard's self-destruct decision because "It's better than standing around helplessly".
Is it though? Really? 50-70% of the crew are likely to survive and even if they can't take direct action they might be able to escape and warn others of the danger.
Riker talks through how long to set the auto-destruct, then decides on 20 minutes because it's a "nice round figure". Yeah, that's the way to make this decision. It should also be noted that no one seems to be given time off work to prepare for their impending deaths, which is a bit unfair.

Doctor Doctor
Pulaski wins much respect from me in this episode because while she is horrified by the potential loss of 30-50% of the crew, she is also the only person (the only person) who objects to Picard's kill-everyone plan. She points out that it's akin to curing someone by killing them, which seems apt. 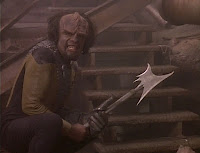 At the start of the episode Worf and Riker appear to be fighting ugly aliens on a jungle planet. Worf goes berserk and after killing opponents comes after Riker who has to yell "At ease, lieutenant" to stop the charging Klingon. Again we see the internal conflict between Klingon Warrior and Starfleet Officer. Worf's psyche is messed up.
When he and Riker are exploring the mysterious Federation ship Worf is angrily confused by the idea of there being two bridges on a ship, he gets a bit intense about it. When he discovers that going through a door brings him back into the same room again he really freaks out, clearly Worf should never play Portal.


Staff Meetings: 1
The key staff meet to discuss what to do about the impending death of 30-50% of the crew. They conclude there's nothing they can do so Picard and Riker decide that the best course of action is to kill everyone first, so Scary Face can't. Yeah, that'll show it.

Won't Somebody Think Of The Children?
Riker and Picard give everyone on board 20 minutes to prepare for their deaths, as it's clear Picard and Riker are upfront about the situation and their plan (and there are no mutinies). This includes the families and all the children. What do the parents tell their kids? Let's hope that in the 19 minutes and 50 seconds they were given to prepare for death no one slipped their loved ones the futuristic equivalent of a cyanide capsule.

Death by Space Misadventure
When Scary Face first appears it asks the usual curious-alien questions. When figuring out death it casually kills Haskell, a crew member on the Bridge (he was a black guy in a red shirt, he didn't stand a chance).
At least Haskell's death is treated seriously and is the basis for further action, not every deceased crewmember gets the same treatment.


The End
Convinced that Scary Face truly has let them go Picard and Riker halt the auto-destruct. The Bridge crew are still calmly working despite their impending deaths, apparently setting the auto-destruct is no reason to stop normal working patterns.
In his ready room Picard speaks to Scary Face who is still observing and has gathered much evidence. It concludes that as a species (though there are different species on board) the Enterprise crew are too different from it and much too aggressive. It says that they struggle against the inevitable. I wonder if it knows what that means, maybe it was watching a whole different ship, because what I saw was surrender to the inevitable. 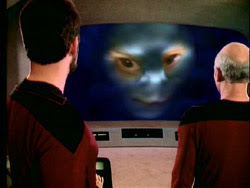