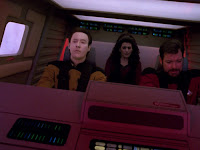 A distress signal on a moon seems to come from a centuries-missing Federation ship. Picard intends to leave, but Troi senses a life down there. The electromagnetic conditions on the moon are too dangerous for transporting, so Riker, Troi and Data go down in a shuttle to investigate. The shuttle crashes, Riker breaks his arm and Troi senses life in the oncoming storm. O'Brien volunteers to beam down with some transporter-boosting gizmo so they can all beam back. After O'Brien beams down and sets up the equipment, lightning strikes and they all fall down. Glowy balls go into everyone except Riker, who wakes and activates the transporter.
The away team wakes in sickbay. Riker discusses their next move with Picard. Data does the android equivalent of clearing his throat, it sounds weird. Data tells Riker they should start surveying the moon at the polar region, but Riker wants to look at the crash site first. Troi tells Picard she sensed voices in the wind and they told her to go to the polar region. (Hmmm *suspicious face*) Data changes the course Ro set, and Riker approaches Data about it the android attacks him. Riker calls for security. O'Brien shoves Worf. Shots are fired. In Picard's office, Troi knocks the Captain out. As she, Data and O'Brien escape the Bridge in the lift, she reprimands Data for showing their hand too early. Security chase after the turbolift, but the possessed crew members know that tracking people by easily-removed badges has it's disadvantages. Security force-fields try to contain them, but Data isn't made of meat so he smashes electrical stuff. Worf chases them into 10 Forward where they take hostages, including Keiko and baby Molly. (Guinan has got to be away, cos she would not allow this kind of thing and would totally see through the hostage-takers.) 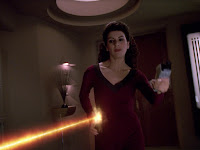 The hostage-takers have computer access behind the bar, so O'Brien stops the transporter room from locking onto them. He also makes sure the sensors don't work in there. The Bridge crew try to resolve the situation; flooding the room with knock-out gas won't work on Data (also, there's a baby in there). Riker suggests blowing the doors open and phaser stunning everyone (guys, There's A Baby In There!). Picard asks Crusher to check the recent scans of the possessed crew members, see if she can figure out what's happened. Then the Captain negotiates with the hostage-takers.
The thing inside Data is a massive jerk and tries to pick a fight with Worf, which would be interesting to watch. Troi stops his nonsense, she's clearly in charge. The thing inside O'Brien recognises Keiko and becomes fixated on her. Troi threatens to injure more hostages unless they go to the polar region, Picard agrees but the ship goes slowly. Crusher figures out that a weird reading from the three was probably something taking control of their brains. Riker wasn't affected because of the pain of his broken arm, so causing pain should force the beings out. Geordi and Ro suggest zapping them with a burst of energy that will cause pain but not damage and should flood Data's neural network too. Picard tells Crusher to figure out a way of containing the entities once they're out. Geordi and Ro go to drill a tiny hole through the ceiling of 10 Forward and get the zapper ready for when the hostage takers are standing together underneath. Picard goes to swap places with the injured hostages in 10 Forward. "Data" is suspicious of him, but "Troi" allows it. A medical team takes the injured away, but leave Keiko and her baby! "Troi" reveals that they're ghosts from the missing ship, she's the captain and the other two are her officers. They knew Picard didn't believe in ghosts, so they had to use deception to get what they want, which she claims is rest from their torment. Crusher figures out how to contain the entities, so now Geordi and Ro just need to prep their zapping device and wait for the opportunity to use it. 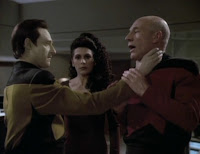 Picard talks to Worf, he doesn't believe these are ghosts because Star Fleet officers wouldn't act this way. "O'Brien" tries to kiss poor Keiko. The ship is at the polar region, and Troi instructs Picard to beam up their remains to be taken home for burial. Picard asks her to release everyone, she refuses and Picard points out that if she is who she claims there's no need for this. "Data" threatens to kill Worf, and "O'Brien" allows Keiko to pass Molly to some nearby before bringing her forward to be killed. The hostage-takers stand together under Ro and Geordi so they activate the zapper, but "Data" moves at the last moment, so only two are zapped. The two glowy balls are forced out, but "Data" has Picard by the throat and threatens to kills everyone in the room, so Picard orders them to abort the rescue attempt.
The Bridge crew try to find whatever "Troi" wants from the pole, but the storm stops both sensors and transporters from working. Picard and Riker manage to convince "Troi" that nothing will work due to the electromagnetic weather, Picard offers to take O'Brien to a cargo bay transporter, as he was the only one who could get it working before. "Troi" says they'll all go and take one hostage each and Picard must ensure they have safe passage. "Troi" takes Picard, "Data" takes Worf, and "O'Brien" takes Keiko, while Molly is left with that lady again. Picard orders that they have safe passage to cargo bay 4 and all transporter control is given to "O'Brien". Riker figures out that Picard chose that cargo bay for a reason, and orders Ro to blow the external doors if needed. In the cargo bay Picard asks how they plan to find rest. "O'Brien" beams in a column of energy. "Troi" says they don't want rest, just escape, and reveals that they're prisoners, separated from their bodies and left 500 years ago. The energy column is 100s of their fellow prisoners, and now they plan to escape using the bodies of the Enterprise crew. They almost escaped on the previous Federation ship, but it wasn't strong enough to escape the storms. Riker orders Crusher to flood the cargo bay with her containment field, the prisoners are all trapped. Picard points out that they'll all die when the doors are opened, and each hostage points out they're willing to die. "Troi" concedes that they're stuck, and Picard offers to send them to the moon's surface again if they release his crew. The three balls of energy go and join their mates.

This is one of the episodes where Picard really earns his reputation for being a great captain, who leads well and cares for those under his command.  When Riker objects to Picard swapping himself for hostages in 10 Forward Picard says that he's a hostage no matter where he is. He's rational about his duties to crew and ship, he feels strong emotions about the situation, but doesn't let them come to the fore, remaining calm in order to be most effective. He's willing to negotiate, and put himself in danger and even to die for his crew. "Troi" knows he'll try to prevent violence, and that's the easiest way to manipulate him. As long as there's a threat to the ship.

Does Not Compute
Data needs a firewall. Seriously, the hostage-takers could not have gotten as far as they did if one of them wasn't possessing an android. At least we know it wasn't Data himself doing it, because as we've already seen, Data has the ability to commandeer the entire Enterprise and potentially kill everyone else on board all by himself. 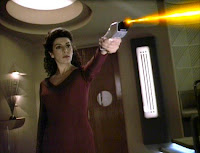 This isn't the infamous 'Good Troi episode' (is that soon?) but this isn't far off as Marina Siris plays the part of a calculating, non-nonsense leader really well. It's plausible that she could be a Captain, and it's only the cold, ruthlessness that gives away the fact that the possessing entity isn't who they claim to be. Her annoyance at "Data" revealing them is plain, she was going to use Troi's position of trust with Picard to go to the polar region, and probably could have got things done a lot quicker and easier that way. In fact it seems as though the two other glowy things are in the category of incompetent henchmen, letting their character flaws get in the way of the plan. Perhaps the one who was going to possess Riker was smarter?

Poor O'Briens
Their marriage is a series of unfortunate events (see also, any O'Brien family episode of DS9). In this case a creature wearing her husband like suit fixates on Keiko and sexually harasses her, while she's held hostage with her baby. It's clear that it has access to Miles's memories, which is why it recognises Keiko and Molly. If it has access to Miles's emotions that is presumably why it tries to kiss her. That doesn't quite explain why it volunteers her to be killed, unless it's a way of removing her as a factor. We get a real sense of the personalities inside Troi (a calculating leader) and Data (an aggressive jerk), but the one inside Miles is just, fixated on Miles's wife and not happy about it? Not quite a character trait. At the very end Miles is saying he would've killed the thing inside him if he could've and Keiko reassures him that she (and Molly) know. I think it's supposed to be heartwarming, but it really isn't.

Security Breach
Yeah, there was this weird synaptic reading on three of the away team (including the one with a man-made brain) when they came back, but we didn't check it out. I like Crusher, but seriously how is stuff like this not something you quarantine people for and figure out before letting them back into the general population?

Won't Somebody Think of the Children? 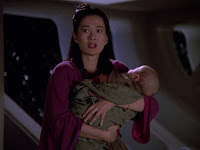 All those plans to get into 10 Forward, knock-out gas and phaser stuns, those might not damage an adult but I don't think a baby has that tolerance. Of course since the sensors were off they might not have known Molly was present, so I guess I can give that a pass. (There don't usually seem to be kids in 10 Forward, although now I'm wondering where the parents and families hang out.) No one mentioned that there was a in baby there when Worf or Picard could talk to the Bridge. Shouldn't Molly (and perhaps Keiko) have been evacuated with the injured people? It's like only Keiko, Miles and that lady who kept holding her could even see Molly.

No Magic Here
Of course they aren't actually ghosts, that would be deeply silly. It's gotta be disembodied, imprisoned aliens, far more rational. It's interesting that Worf says cases of possession have been reported throughout Klingon history and they even have a word for it. Picard doesn't dismiss Worf's belief and says humans have similar ideas, but points out that in this case it seems unlikely that these used to be Star Fleet officers. I mean these guys are disembodied, but still extant and capable of possessing others, so they seem functionally the same as ghosts.

The End
Troi describes what it was like, able to perceive everything but having no control. Data apologises to Worf. The O'Brien family leave sick bay together and Miles says he would have killed the thing inside him if he could, which I think is supposed to be sweet and reassuring. This is supposed to be a light sort of ending, but it feels artificial. Everyone should be processing what they've been through, but there's no time for that, so some mild banter will apparently suffice (also, aww baby). 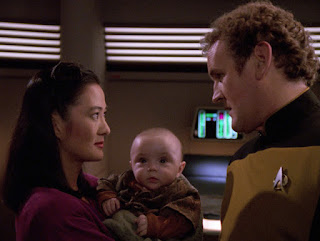 Posted by Catherine Hill at 13:01 No comments: