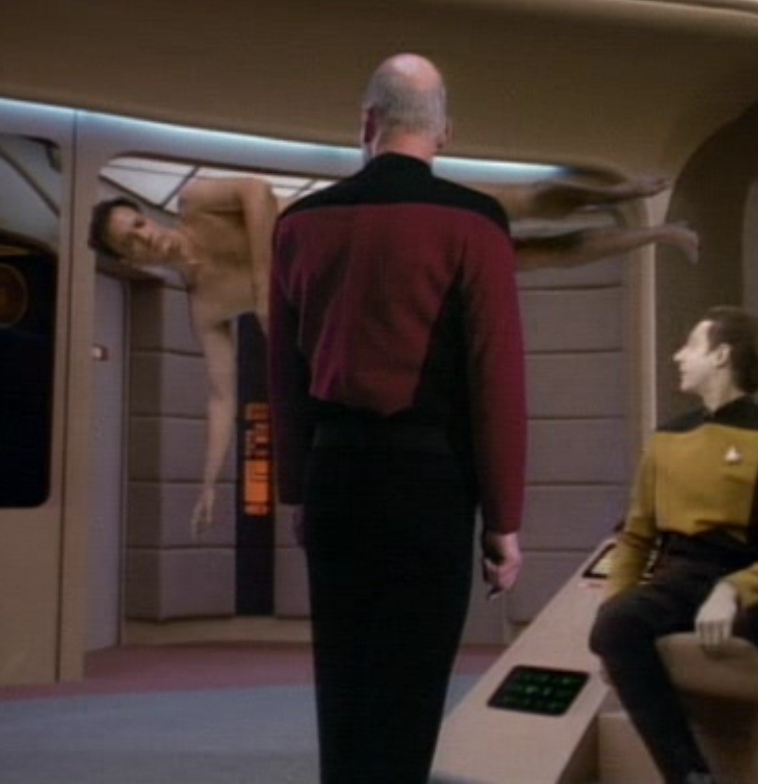 The Enterprise is helping a planet that is endangered by its falling moon. Geordi says there's slim chance they can do anything, but Riker wants to try. Problem solving discussion is interrupted by Q appearing in midair then falling to the floor of the Bridge. The crew assume that Q is responsible for the moon problem. Q says he doesn't know anything about it. He's angry about being given grey clothing, about being there, and about being human. He's been punished by the Q-continuum for being chaotic and was forced to chose a mortal shape for himself. Q asks for sanctuary. Data and Troi believe him, but no one else does.
A bright light enters the Enterprise and scans the ship. Picard interrogates Q, who tried sleep and finds it scary. Q maintains he had nothing to do with the falling moon, but offers to lend his vast expertise to the problem. He doesn't have powers anymore, but he still knows a lot. Data is assigned to be Q's chaperone and they discuss becoming human. Geordi outlines his plan for the moon, Q doesn't think it'll work and suggests they just redefine universal gravity, he used to do. Q is in pain and Dr Crusher diagnoses back spasms. Thinking about it Geordi reckons he can try to make the moon lighter. 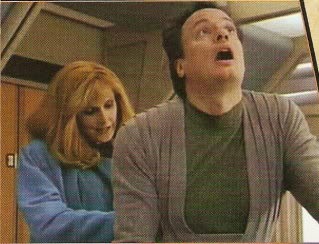 In 10 Forward Q and Data discuss eating. Guinan is super amused by Q's situation. A cloud appears and surrounds Q. Geordi adjusts the sheilds to block it. Q falls to the floor and cries for help. The alien cloud has a grudge against Q because of his past cruelty. The senior officers discuss what to do. Q asks to join the crew, Picard is hesitant, but tells him to help Geordi with the moon. When Geordi lowers the shields to try moving the moon the cloud returns and surrounds Q again. Data saves Q, and gets damaged. Everyone but Q is worried about Data. Q visits Picard and confesses that he didn't understand what Data did for him and he's terrified of everything without his powers. Data recovers. Q leaves the ship in a shuttle. He truly hates being human and figures his death will be better for everyone. 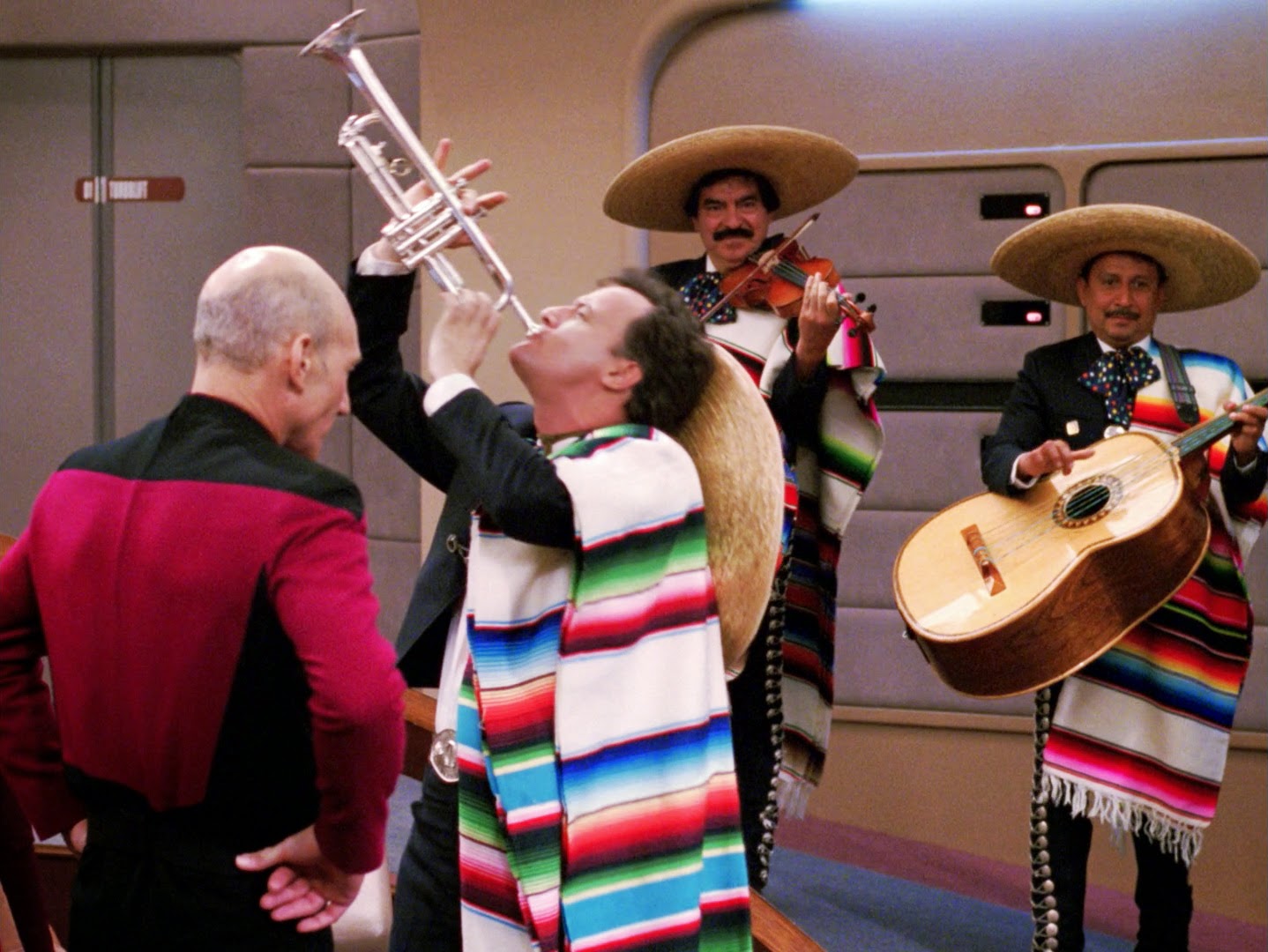 When Picard realises what Q is doing he hesitantly orders for the shuttle to be returned, but they can't move it. Q awaits death when some guy comes in through the wall, it's another Q. They've been watching him and wonder if this is truly self-sacrifice. Other-Q doesn't understand why the humans are still trying to help him. Q doesn't get it either, but it seems he's learned a lesson, so his powers are returned. Just as Picard thinks Q has been destroyed he appears with a mariachi band, celebrating the return of his powers. He offers Data a gift, allowing him to laugh uncontrollably for a moment. Q leaves. The planet hails the Enterprise and thanks them for returning the moon to its rightful place, saving them all. It must have been Q.


Guest Star
John de Lancie returns as Q. I just saw the episode of the West Wing he's in. He plays a pollster who thinks the President will get reelected if he comes down on flag burning. It's a less amusing role.

"This is getting on my nerves, now that I have them." 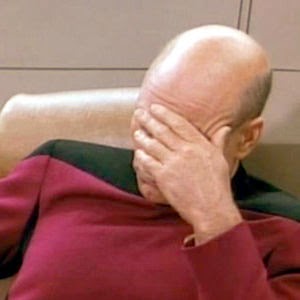 Picard is doing his famous facepalm as Q says he's the closest thing he has to a friend. Lucky Picard.
It takes Picard a while to understand that Q isn't lying. He's determined to brush off all Q's attempts at familiarity or eliciting sympathy, even while he defends the human capacity for compassion and empathy. Then again Q is openly mocking that same capacity while relying on it for his survival. It's only when Q goes to end his existence that Picard believes and he's rather grudging about trying to save Q. At the end when Q returns, triumphant in his reinstated powers, Picard is grim and unamused.

Riker: lover, adventurer, middle-management
Riker is suspicious of Q throughout. Whatever bond they may have had (or Q may have imagined) before is clearly gone. At the end Q wants to give people gifts and makes two scantily-clad human women appear either side of Riker.

Riker: I don't need your fantasy women.
Q: Oh, you're so stolid. You weren't like that before the beard.

Q may have a point. Back when he granted Riker the Q-powers in Hide and Q (before the beard) Riker tried to gift Worf with a fantasy Klingon woman, which just freaked Worf out. Then again the point of that episode was that Riker had gone mad with power (as much as a Star Fleet officer is allowed to do so in Trek). Here Riker doesn't really look at the girls pawing him, he just looks offended, which is a cool reaction. Riker is often painted as a ladies man, and he is, but he's rarely sleazy or disrespectful of women. In fact at times when he's offered sex on unequal terms he rejects it, both here and in The Vengeance Factor. It's characterisation I can get behind.

Does Not Compute
"An irony. .. You have achieved in disgrace what I have always aspired to be."
Q and Data discuss humanity as outsiders with very different perspectives on the species. Q asks Data about eating, Data eats something that sounds like specialised motor oil. Data observes that Troi eats chocolate when she's in a bad mood, Q feels dreadful and orders 10 chocolate sundaes. 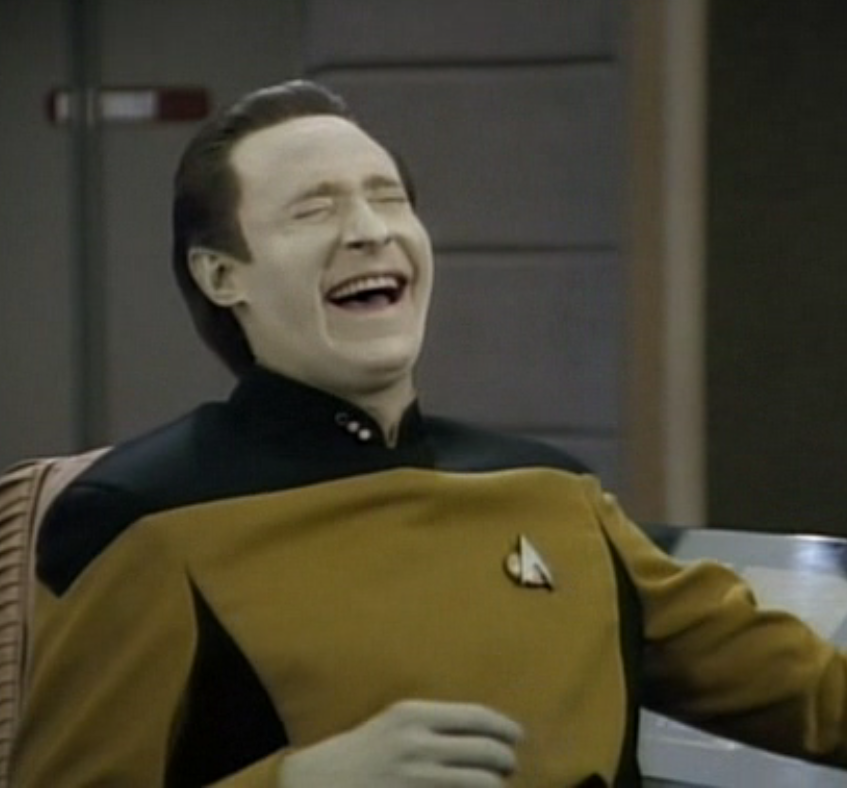 Data lectures Q on interpersonal skills and how he will need to develop some if he's going to stay. Q claims that omnipotent beings do not work well with others, makes you wonder why his people threw him out?
After Data recovers from saving Q the former-immortal praises him for the wonder that he already is, but also says that Data is a better human than he is.
At the end Q offers Data a gift. Data refuses and offer to be remade as a human (just as he did from Riker in Hide and Q). Q says he would never give Data such a curse. Instead Q gives Data a few moments of uncontrollable laughter. It's great to see the initial confusion on his face give way to utter hysterical laughter. Then it fades back into Data's customary expression.

Klingon Warrior
Worf and Q's mutual antagonism is amusing. Worf suggests Q can prove his humanity by dying and Q asks if Worf has eaten any good books lately. Q contemplates the many minor irritations of humanity, Worf doesn't care. Then Q suggests that he should have chosen to be Klingon, tries to get Worf to speak to Picard on his behalf, but continues insulting Worf, presumably from force of habit. Worf is stoically amused by Q's predicament.

Guinan's Hat: Red-brown and glittery
Guinan is grimly amused by Q's situation, he was not looking forward to seeing her. When Data says many of the crew do not believe Q she stabs him in the hand with a fork "Seems human enough to me." It's very funny, I suggest you google it.
Q is scared of her and tries to talk tough, but backs away from her and calls her dangerous. She points out that Q is defenseless and he's made a lot of enemies in his considerable time. She advises he listens to Data, because Q is a pitiful excuse for a human and he's only going to survive by relying on others.


Staff Meetings: 3
1. Picard and Riker discuss the Q situation. They're both convinced he is behind the moon problem and it's all one of his jokes. Though Picard is willing to accept the possibility that he's telling the truth.
2. After he is attacked by a cloud that holds a grudge Q is questioned by Picard and Riker. The Captain realises Q has purposely come to them so they will protect him from his many enemies. He doesn't want to spend his time dealing with Q's problems. Q says he can help and be useful. Data point out that Q as been useful to Geordi so far. Data is to chaperone Q while he helps in Engineering.
3. Q visits Picard, admits that he's entirely selfish and -in his flippant way- says he cannot continue like this. Picard points out that he's not Q's confessor and does not want to deal with his issues.

The End
After Picard has shut down the mariachi party, Q's left, and Data's had his first real laugh, the planet hails the ship. Their moon has returned to it's old, steady orbit, they thank the Enterprise for saving them. Picard is confused. After checking the moon presents no further danger Picard grudgingly concedes that perhaps there is still some humanity in Q. A smoking cigar appears in Picard's hand and Q appears in the smoke, "Don't bet on it, Picard."

Posted by Catherine Hill at 19:52 No comments:

At the end of this month I'll be leaving my current job to work in support/admin role a local university. It is exciting and also a bit nerve-wracking.

I've been working in the contact centre for a year and three months now. There's a great team of people there and they're supportive. I've learned a lot and done well while I've been there. Also I've proven to myself that not only can I get a new job, but I can thrive in different environment and rise to meet challenges. It's been a good time for my confidence and has helped me develop a thicker skin. I wasn't actively job hunting this time, I applied because I saw the job advertised and it caught my interest.

I'm quite looking forward to working at the university. It's where I studied so I know the area, the campus is a nice environment. From a practical point of view it's closer to where I live, which will cut down my commute dramatically. Also I think the work will be something I'll enjoy more than my current role, it'll involve more responsibility. Plus the university, by the nature of the kind of institution it is, has a lot of good facilities. The facilities include a large library, which I'm sure will encourage me to read more non-fiction.

It took a bit of decision-making to make the change. I had solid prospects with my current employer and felt comfortable there. However I'm pretty certain I've made the right decision. It's good to have a new challenge.

As a weird coincidence the job offer came just a few days after I'd completed the novel first draft, which has a main character who works in a support role at an education/research institution. So now I'm thinking maybe the next novel should be about someone who unexpectedly comes into a fortune. :)
Posted by Catherine Hill at 19:35 No comments: