What Happens
The team are sent to investigate an 0-8-4, which is code for something mysterious. It's in an archaeological dig in Peru and might be ancient and/or alien. Rebels show up while the team are trying to secure it and a firefight ensues. The Peruvian military police arrive, led by an old friend/flame of Coulson's, Camilla Reyes. Reyes' unit helps the Shield team get the 084 back to the plane, and escape into the skies with them. Fitz determines that the device is very powerful and dangerous. The Peruvian force turns on the Shield team; they were sent to recover the 0-8-4 for their government. It had been made by a Hydra scientist who fled to Peru from Germany after WWII, then lost. Separated from Coulson, the team work together to free themselves and take back the Bus. The device is activated and blows a hole in the side of the plane. The Shield team survives and hand over the 0-8-4 and Reyes, with her surviving men. The device is put in the Slingshot, which is where Shield sends really dangerous stuff towards the sun in rockets. Just as the team are bonding Skye gets a secret text from the Rising Tide suggesting she infiltrated Shield on purpose. 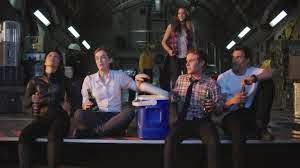 Coulson's Alive!
Coulson defends his reasons for recruiting Skye, he's already considered Ward and May's objections. His interactions with Reyes give an idea of what he used to be involved in, but she observes that he's changed a lot. He acknowledges that his team aren't operating well together yet, but he sees the potential in the group.

The Cavalry
May goes on the op without a gun, which Ward comments on. She says she'll take a gun if she needs to. She immediately takes two from rebels. This is the woman who didn't want to do combat. When they're captured May escapes from her restraints and starts the plan while the others are still talking.

Meh, Ward
Ward complains about how other people hold him back, he's used to working alone and resented looking after FitzSimmons and Skye during combat. Fitz points out that people like them design and make all his gear and weapons. It's a good point, one that some spy films/shows/franchises neglect. At the end Ward agrees to train Skye as a field operative, her actions having convinced him of her potential.

Science Duo
FitzSimmons are excited that Skye's joining the team and eagerly show her the plane. Their excitement at having a new person on board is rather sweet. Fitz comments that the  0-8-4 engineering looks German, although he too assumes its alien because it uses tesseract technology. While they're racing through the jungle he has it on his back and doesn't manage to tell Ward how dangerous and unstable it is. When they're taking the plane back Fitz's little drones are a major part of the plan.

Hacker Girl
Ward and May both advise Coulson not to recruit Skye because she's a liability and has no Shield background. Coulson sees the latter as a benefit. Sky explains her ethos to Ward, she loved the Rising Tide because it's a big group of people working together to solve problems. Skye is handed a safety leaflet when she first comes to stay, it has rubber dinghies on it. Later she uses one to block the hole in the plane, saving Ward. Although Skye pulls the team together when they're in danger it looks like her allegiance is still with the Rising Tide.

Weirdness of the Week
An 0-8-4 that seems to be ancient, as it's embedded in a temple with pre-Incan artifacts, but is actually post-WWII. Reyes doesn't mention how it was lost, but I guess its weird design caused it.

Villain of the Week
Reyes and her men aren't quite villains, antagonists mostly. She's committed to her cause, but Coulson points out that control of the device will turn her government into a tyranny. 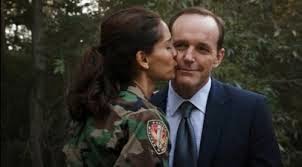 SHIELD LOL
Fitz is excited that he might see a monkey in the jungle, this is apparently an obsession the character shares with the actor, Iain de Caestecker.

When the team get into an argument about who contributes what Coulson has to tell them off like bickering children. He points out their skills -Ward speaks 6 languages, Simmons has 2 obscure PhDs, Fitz is a rocket scientist - while telling them to figure it out and get along. Skye quietly says "I-I'm... good at stuff too."

Simmons goes on about being in the field, in a knowing but excited way, even though she's been in the field la few days longer than Skye. It's kind of adorable.

After the credits Fury yells at Phil for putting a hole in the Bus after 6 days. He insists it's repaired exactly as it was, no additions, like a fish tank or something. As soon as Fury leaves Phil says over comms "Yeah, we're gonna have to kill the fish tank." 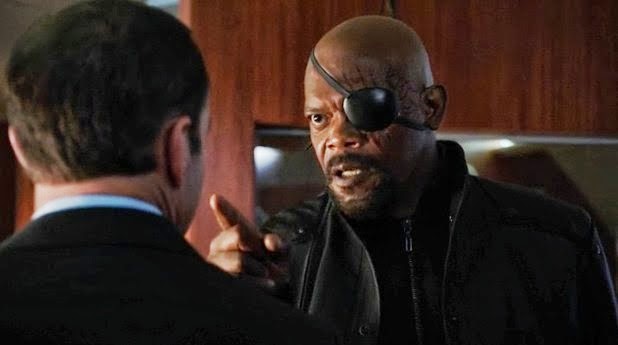 Coulson describes an 0-8-4 to Skye as "An object of unknown original. Kind of like you." Little does Coulson know that's literally what Skye is.

He says magical place when describing his R&R, and Skye points out he already said that.
Posted by Catherine Hill at 11:42