The Girl in the Flower Dress

Weird moral absolutism as a side-effect of super soldier serum.

What Happens
A Hong Kong street performer called Chan Ho Yin has fire powers and is approached by a woman called Raina. She seems interested in his powers but distracts him while he's captured. Agent Kwan from the HK office briefs Coulson's team, as Chan was being monitored by Shield, and reveals that they were hacked by the Rising Tide. Skye traces the hack to Miles in Texas, who's known for high-profile hacks. The team try to intercept him. Skye secretly goes and meets himbecause they're dating. Skye purposely infiltrated Shield. May finds them. Skye and Miles are put in interrogation, where they argue about politics and Shield. Ward reveals Miles was paid to hack the HK office by the Centipede Project, which he thought was an eco-group. Skye is furious that Miles sold out. Chan wakes up in a lab, the doctor from Pilot gives him the serum. Raina convinces him he's powerful and calls him Scorch. His fire powers stop the serum from exploding, so the doctor drains him to use his platelets. Shield figure out where the lab is, and try to free Chan. Angry and unstable, he kills Agent Kwan and the doctor. Coulson and May try to reason with Chan, but have to knock him out. As Chan's power erupts Miles takes remote control of the building's vent system to channel the fireball into the sky. Miles is left in HK, with a bracelet that stops him using electronics. Skye apologises to Coulson, who demands to know her big secret. She tried to find her real parents, but all she has is a classified document redacted by Shield, she wants find out who she is. Coulson offers to help her, but makes her wear a monitored bracelet that stops her hacking. Raina meets a man in prison and asks to speak to 'the Clairvoyant.' 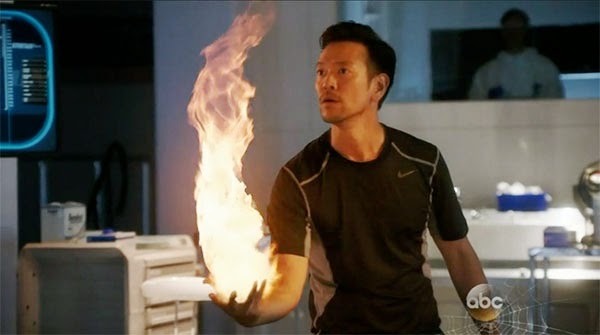 Coulson's Alive!
After he recruited her Coulson is particularly furious and disappointed by Skye's betrayal, and he admits to May that she was right about Skye being a risk. Skye has trouble facing Coulson's disappointment, the daddy-figure vibe has been pretty strong from the start. Coulson really doesn't want to kill Chan, but after killing a Shield team and refusing to listen to reason 'Scorch' has to be taken out. Coulson talks about having an alien spear put through his chest, which reminds me of the weird UK DVD edit which removed the tip of the spear, for no good reason. When Skye explains that she's looking for her family he's sympathetic and offers his help, but hasn't forgiven her deception.

The Cavalry
May always had her doubts about Skye, and Eye-Spy established she's willing to go off on her own to eliminate threats to the team. May and Coulson often have grown-up side conversations, and Skye has jokingly referred to them as the parent figures of the team, but May is more like a scary, disapproving aunt than any kind of mother figure.

Meh,Ward
Ward reveals to Skye what Miles has really been doing. When Skye is going to Coulson's office in disgrace she asks Ward if he wants to come with her as her Supervising Officer. He says he's off duty and it seems like he's washed his hands of her.

Science Duo
Not given much to do this episode, to be honest. They both feel betrayed by Skye's actions, Fitz especially.

Hacker Girl
Skye's meet up with Miles connects with the text she got at the end of 0-8-4. She's still involved with Rising Tide (and Miles), but they've been separated for a little while and both have changed. Skye's more accepting of Shield and though she doesn't know it Miles has money now. She's ashamed and embarrassed at being caught, and she can't quite face Coulson's disappointment. The reveal about Miles really shakes Skye, and it seems that she got a lot of her ideals from him and has to readjust when she realises he's not what she thought he was. Skye keeps a SIM card in her bra, with all the info she has on her family. I guess it's a safe place, and possibly explains why she keeps her bra on when she's with Miles (or cos that's what women on TV do).

Weirdness of the Week
The return of Centipede, this time given face and name in the person of Raina.

Villain of the Week
The eponymous Raina. She uses charm to talk Chan up, filling him with grand ideas even though he's only a resource to Centipede. She's a recruiter, leaving the lab work and violence to others. She's cold as anything, not at all concerned when she leaves her colleague behind to be killed. SHIELD LOL
When Agent Kwan reveals that Rising Tide hacked the his office Coulson's team all go quiet and look at Skye. Kwan, unaware of this, taps the video screen. "Hello? It got real quiet. You guys still there?"

When Raina suggests Chan call himself Scorch he's initially scornful. Then he adopts it. Raina's doctor colleague says "You gave him a name, didn't you?" while eyerolling. When Coulson and May realise he's got a name they know it's a bad sign.

Melinda May: moment killer! After sleeping with Miles, Skye searches for her top. She opens a door and May is there holding it with a face like a terrifying matriarch. "Get Dressed."

While hiding from Chan's fire May asks Coulson if his file said anything about him being homicidal. Coulson replies "Just said he was kind of a tool."
Given how the serum affected Mike it's probably not surprising that Chan, who seemed less stable than Mike, turns murderous. 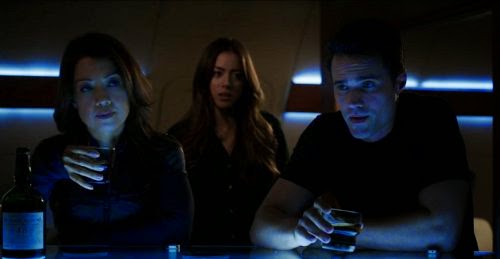 You Have Failed This Spoiler (future AoS eps including s2)

Raina is one of the most interesting returning characters. Always cool and composed and involved in/connected to a lot of things. Her background is similar to Skye's, except that she knows where she's from. Like her what we all want to know after the series 2 cliffhanger is what she will become.

I'd forgotten about the guy in the prison, it's not like he's that important in the scheme of things. He mostly just gives us a front for the Clairvoyant.

Coulson tells Skye that she might not like the truth if she finds it and she says it can't be worse than what she's imagined. I don't know if she's imagined worse, she can't have imagined weirder than her family history. A mother killed for her ability and a father who becomes a twitchy, murderous doctor.


My thanks to @AlasdairStuart and @runalongwomble for the spoiler pun suggestions.
Posted by Catherine Hill at 14:12