Best of Both Worlds Pt 1

A Federation colony has been totally destroyed, it looks like Sunnydale at the end of Buffy. This all seems familiar and it looks like the Borg are closer than ever. An Admiral brings an up-and-coming officer called Shelby to work with the Enterprise, she's the closest they have to a Borg expert. The Admiral reveals to Picard that Riker has failed to accept yet another promotion. Shelby makes herself unpopular with Riker by telling him she wants his job, she had assumed he'd take the commission. Riker reacts defensively by being grumpy around Shelby and bitching about her to Geordi. They also have a disagreement about whose turn it is to have Data.
Shelby's tests confirm it was the Borg that destroyed the colony and plans are made for a confrontation. Shelby has ideas, Riker doesn't like her, I mean her ideas. Picard suggests Riker consider his career, so he has an inconclusive chat with Troi about it. The Borg are sighted and the Enterprise pursues. The Borg ask for Picard, by name, then don't listen to anything he has to say. The Borg want Picard to beam over and won't take no for an answer. The Enterprise barely survives the encounter and hides in a nebula.

More plans are made, Riker and Shelby disapprove of each other's strategies. The Borg find them and some board the Enterprise to kidnap Picard before warping away. Riker wants to go save the Captain himself, but Troi points out he's in charge now and has to stay on the Bridge. Shelby leads an away team to rescue Picard, but the scoundrels have removed his comm badge and his uniform (though at least they tidied them away in a drawer. Crusher suggests they disable power relays to see if they can get the Borg Cube to drop out of warp. This works, although it attracts hostile attention from Borg foot soldiers. As they're shooting the approaching Borg they see Picard and try to rescue him, but he's covered in Borg gear and Worf can't get near.
When the Cube drops out of warp the away team are beamed back without Picard. They want to go back and him, but they only have this one chance to use a weapon against the Borg. There's no time for anything else. Riker makes his choice.
To Be Continued 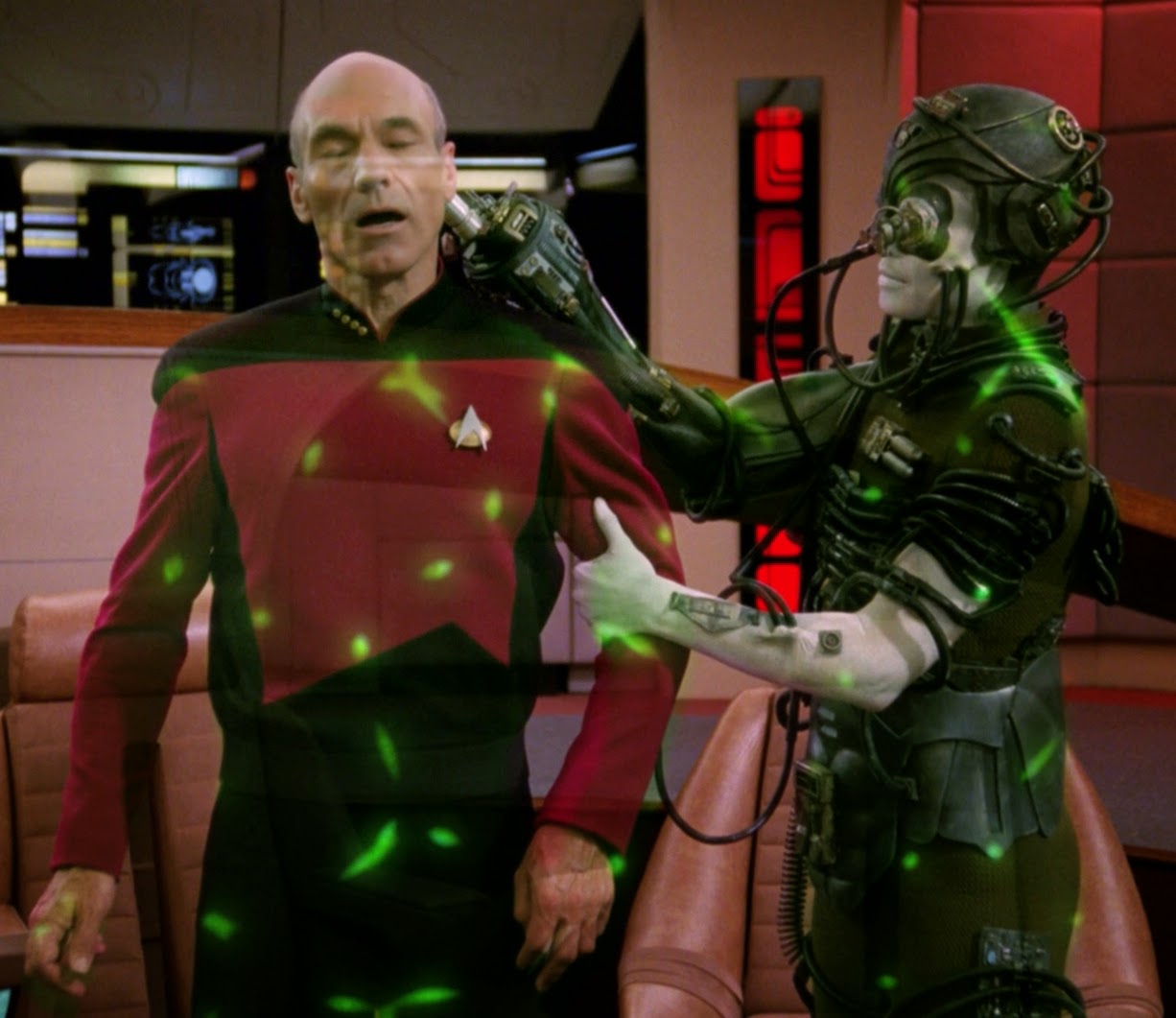 Picard is surprised to learn from the Admiral that Riker has been offered another commission and not told anyone. He takes the Admiral's advice and has a career meeting, pointing out that Riker is ready for command and shouldn't hang around for no reason. Picard also points out with amusement that the stuff Riker doesn't like about Shelby makes her sound like a younger version of Riker. Picard unwittingly plays the 'Daddy' figure in Riker and Shelby's intrigues.*
No one understands why the Borg are asking for Picard. How do they even know his name, or what names even are? It turns out that they have heard of his speeching powers (as seen in episodes too numerous to list) and decided that he will make a good spokesperson. While this is a sensible line of thinking I don't know why the Borg feel they need a spokesperson. Perhaps that'll come up in the next episode? The reveal of a Borgified Picard is creepy and I can see why it had such impact. 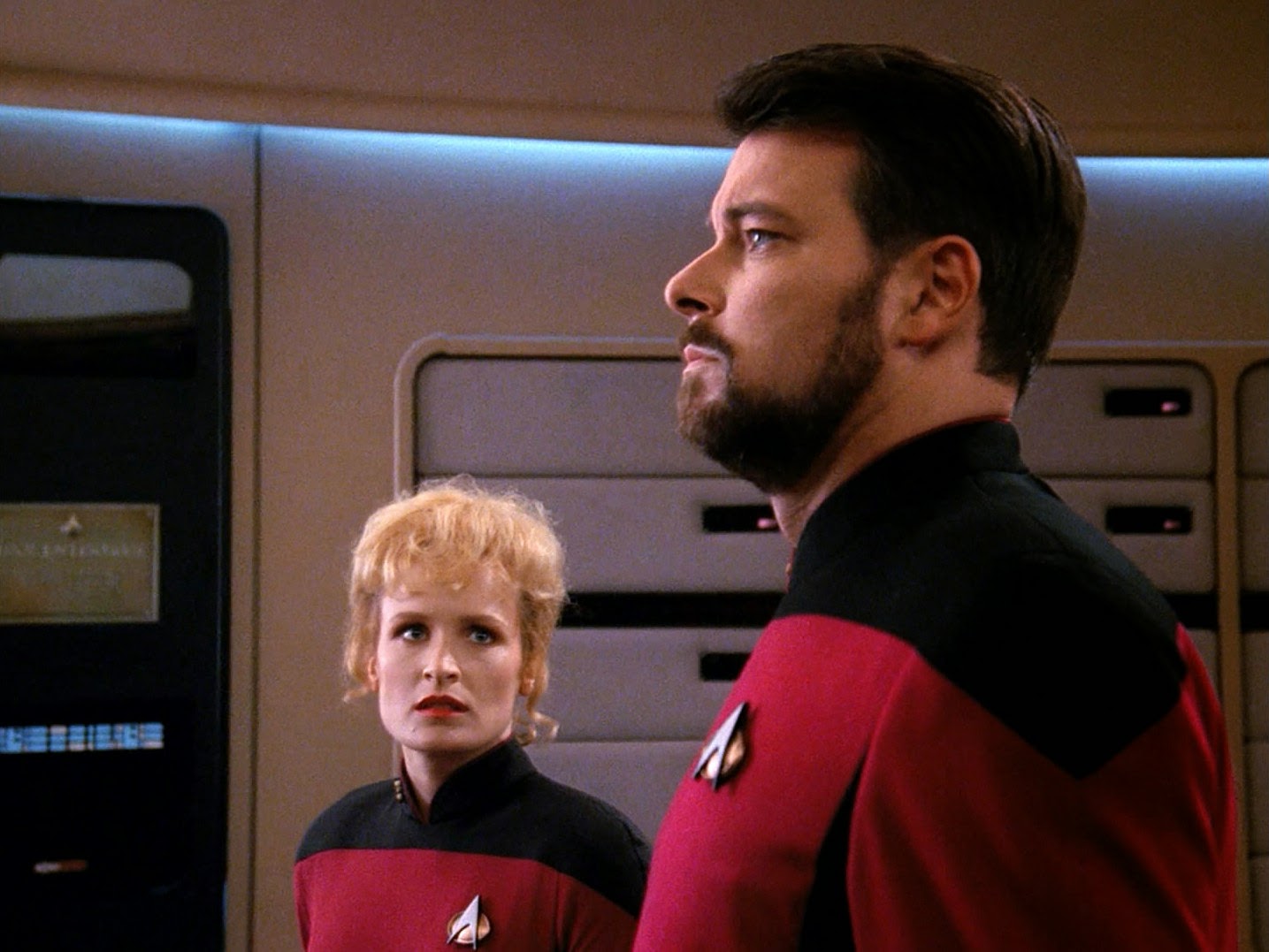 Riker's reluctance to take a commission perplexes the Admiral, Picard and Shelby. It may even perplex Riker himself, who likes where he's working but questions his career trajectory. Perhaps he's got comfortable approving rotas and reading reports? Maybe he's not ready for the executive washroom? It's possibly not entirely tactful to ask these questions of Troi, since his ambitions seem to have been the reason they broke up, but she's fine with it. Riker is very defensive of his current position, hence his dislike of Shelby. She is forthright and a risk-taker, but she also knows what she's doing and has garnered respect. Perhaps Riker can't stand that she's so much like him, or like he used to be (I don't think the Riker-plays-things-safe subtext is entirely justified).
When Riker is forced to take command he immediately wants to act like First Officer and go after Picard himself, leaving a new, temporary colleague in charge (my, how safe he plays things). Shelby tries to point out that she's more qualified for the away mission. He won't listen to her, so Troi has to point out where his responsibilities now lie. After this Riker realigns his priorities and later he even chooses to leave Picard captive in order to make use of their only weapon.

Wesley
Why is Wesley attending the poker game? Why is he in a key staff meeting? He only got promoted to Ensign right? Do the other Ensigns get to do these things? I suspect not, which may be why Wesley doesn't hang out with the other Ensigns. 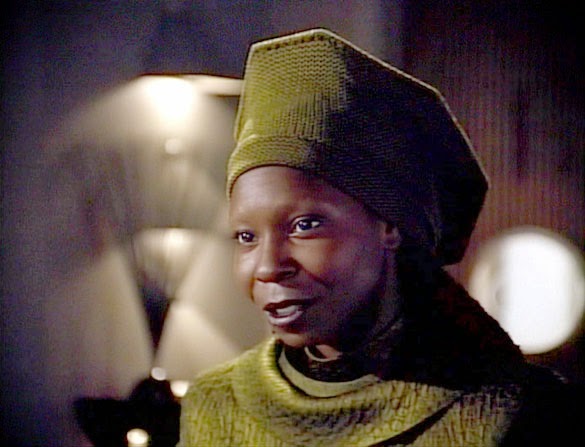 Guinan's Hat: olive green
Picard goes to her for counsel. Her people were mostly wiped out by the Borg so she knows how he feels. Her advice is uplifting in the long term, human (not Federation?) values and culture can survive as long as even a few humans survive to keep them alive. Of course on a personal level it's not comforting as they're likely to die and from the sounds of it she thinks a large part of humanity could too.

Death by Space Misadventure
There were 900 people in the colony that got scooped away by the Borg.
After the Borg attack the Enterprise 11 are dead and 8 are not accounted for.

The End
The away team want Riker to try and save Picard or at least ask Starfleet about it. But now Riker's in Captain mode he knows there's no time. The Borgified Picard comes on screen and tells everyone his new name and function. Riker orders Worf to fire.

This is actually a tense and interesting cliffhanger, which is a first on this show. I get the impression the start of series 4 will live up to the promises made here. Whatever they do it can't be as bad as The Child. 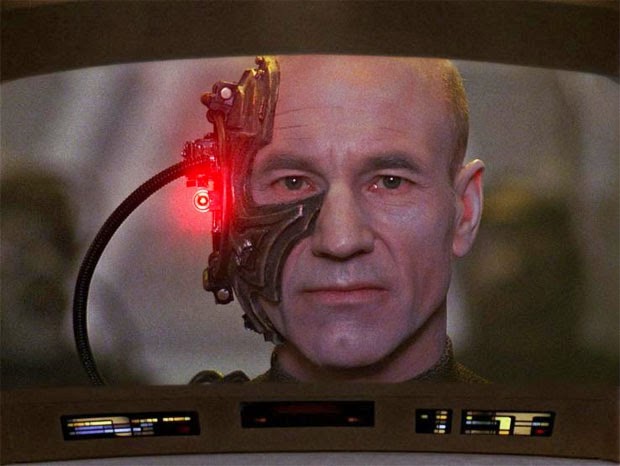 * Not actual intrigues, since everyone is really upfront about everything, but y'know the TNG version of intrigues. People getting a bit annoyed at each other and being civil but not friendly, that kinda thing.
Posted by Catherine Hill at 22:25