What Happens
A mysterious woman steals diamonds from a group of masked men in the dark, on a subway train in Stockholm. This isn't the first weird diamond robbery. Skye uses social media to identify the thief, and Coulson recognises Akela Amador, his former trainee who went MIA years ago. The team track Amador to Belarus and discover a weird, encrypted video feed. Amador knocks over their van; May wants to take her out but Coulson wants restraint. The feed Skye recovers reveals that Amador has a camera in her eye, which allows her to see in the dark with her eyes closed. She gets instructions typed into the corner of her vision. May goes alone to take Amador out, but Coulson follows and shoots Akela with a tranquiliser. When she wakes he assures her that the feed has been transferred to a pair of glasses, worn by Ward. Amador tells Coulson that she was trapped for years, then she was given a new eye with a camera and a failsafe to take her out if needed. FitzSimmons try to remove the device from her head. Ward and Skye follow Amador's assignments; he gets into a factory and is told to seduce the guard. Ward tries to be friendly, but knocks the guy out. He gets into a room, looks at weird patterns on the wall at which point a picture is taken and he's told to get out. He catches himself in a mirror and the failsafe explosive is activated just after the device is taken out of Amador. Coulson tracks down Amador's handler, but before he can talk to him he's taken out with a failsafe too. Ward escapes and Akela is turned in but Coulson promises her a fair trial.

Coulson's Alive!
Amador is someone Coulson trained up and them lost under troubling circumstances. When it initially seems that she's gone rogue he doesn't want to inform HQ and is determined to bring her in so he can speak to her and fnd out what happened. Skye talks to him about it, observing she isn't the first person he's taken a chance on.

The Cavalry
May assesses Amador as a risk and now that she's doing combat again she takes the initiative to go take her out. Not backing down from confrontation even after Amador warns her that as soon as she looks at her only one of them can walk away.

Meh,Ward
I think I felt more kindly towards Ward while he was wearing glasses. Not sure why, but my husband wears glasses so maybe I've been programmed or something.Ward is not amused when FitzSimmons and Skye are in the van and break radio silence to ask about toilet arrangements. Ward is entirely unprepared for seducing a guard (why such an essential skill isn't taught to male spies I don't know). Ward tries to be friendly as Skye suggests, but falls back to violence, which he's more comfortable with. Then it turns out he did need the guard conscious in order to make a quiet escape.

Science Duo
Simmons has operate on Amador's eye while she's conscious, but given the hell she's been through she doesn't flinch at this. The device itself falls into Fitz's wheelhouse, but as he's squeamish about icky biological stuff he's a bit wary about the fact that it's still in her head. Good thing Simmons is there to help him. It kind of reminded me of Iron Man, when Pepper has to follow Tony's instructions and basically do a kind of mechanical heart surgery on him.

Hacker Girl
Sky bluntly tells Ward that peeing in a bottle is not an option for her and Simmons. Skye gets into Amador's feed and later she figures out how to give Amador a reprieve by transferring the feed to glasses and she has to guide Ward, like a weird first-person shooter. She tries to explain to Ward how he can try a bit of male bonding, but he doesn't get it.

Weirdness of the Week
The eye-camera-explosive device. It's scary because someone can be entirely controlled without ever knowing who's doing it. Amador is able to tell Coulson her handler is older and British only because of the kinds of words he uses in the messages. Then when Coulson tracks him it turns out he was being handled himself. Seeing his eye explode behind the socket is pretty creepy. Also that entire diamond stealing operation was all done to get access to the back room of a factory in Belarus and take a picture of some weird writing. 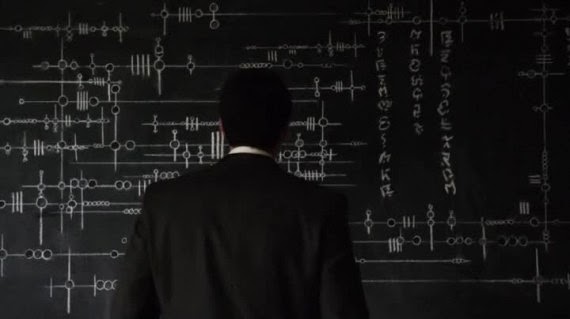 Villain of the Week
Mysterious eye-tech people of unknownness.

SHIELD LOL
Ward tells Skye he doesn't need her help dealing with a target. Then the instruction 'Seduce him' appears. "Help."

Ftz wants to call the weapon they use to deliver the dendrotoxin (which knocks people out) the 'Night-night gun'. Ward refuses.

Fitz wants Skye to use the x-ray function on the glasses to help him cheat at poker. Skye points out if she does that she'll also see Fitz naked, at which point he totally refuses and rushes away. Skye sneaks a peek at Ward. 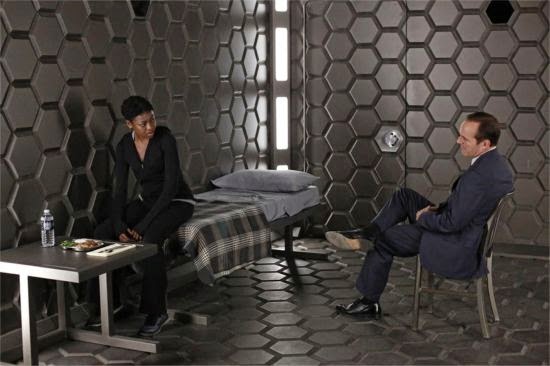 I, Spoilercus (for future AoS eps, including series 2)

The eye tech will later be used with other cybernetics and the creepy "incentives programme" to compel large numbers of people working for an evil company.

Akela sees Coulson is different and asks May why. She explains about Coulson dying, but this isn't enough for Akela who asks "But what did they do to him?" After all she's been through perhaps she can see signs of some terrible change in Coulson?

The weird writing in the back room is unfamiliar to Coulson and isn't in the Shield database anywhere. This is the start of the major 'alien writing' plotline that'll get resolved in series 2.
Posted by Catherine Hill at 12:06