Episode: s3, ep 25 (isn't this more episodes than even US series normally have?) 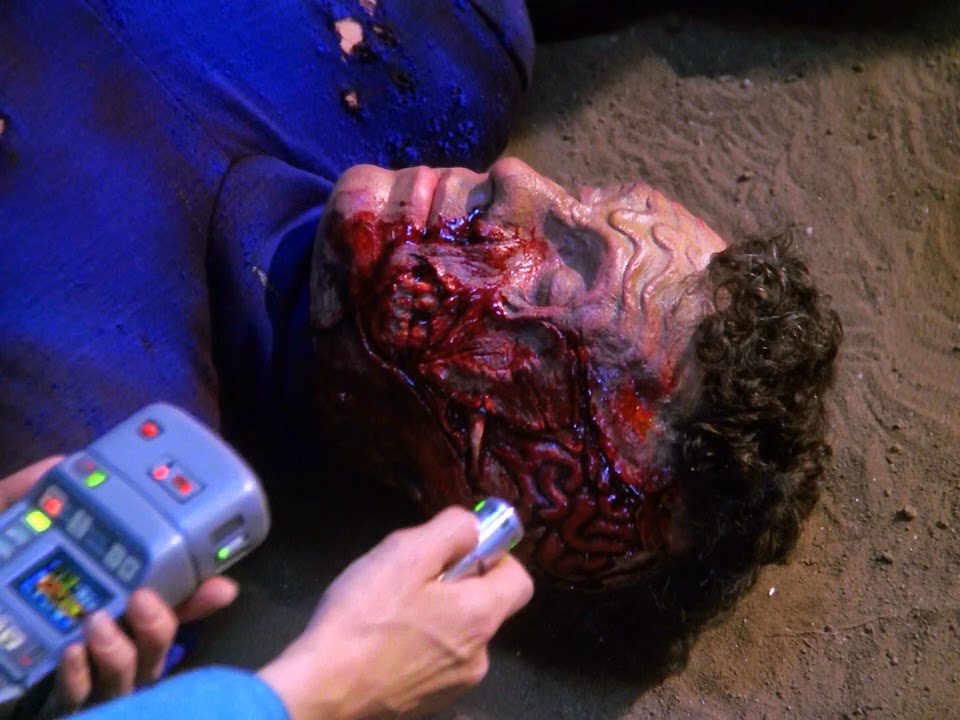 Geordi has a crush on someone and talks to Worf about that, before entirely failing to speak to the woman. The Enterprise is doing something dull when they find a crashed ship and injured humanoid. An away team goes to assist. Dr Crusher has to link the alien to Geordi with forehead stickers in order to beam him to sickbay, something golden and glowy happens for a moment. A strange pod is taken from his ship. The medical team work hard to save the alien, and he stabilises partly because he has regenerative abilities. He also seems to be mutating on a cellular level, but it's not clear what that's about so Crusher just keeps an eye on it.
The alien wakes with amnesia, so Crusher uninventively calls him John Doe. Despite his regeneration powers it takes him a while to recuperate and he's confined to sickbay for a month. Beverly and John grow closer, and Wesley asks whether the mysterious alien will be his new daddy. Beverly knows she has feelings for him, but he's also her patient. John turns out to have healing powers. Data and Geordi technobabble a lot while trying to figure out how to get the information out of the pod from John's ship. Eventually they figure it out and trace where his ship came from, it's in the direction they're going. John is alarmed and knows that he can't return, but Picard doesn't want to alter course. 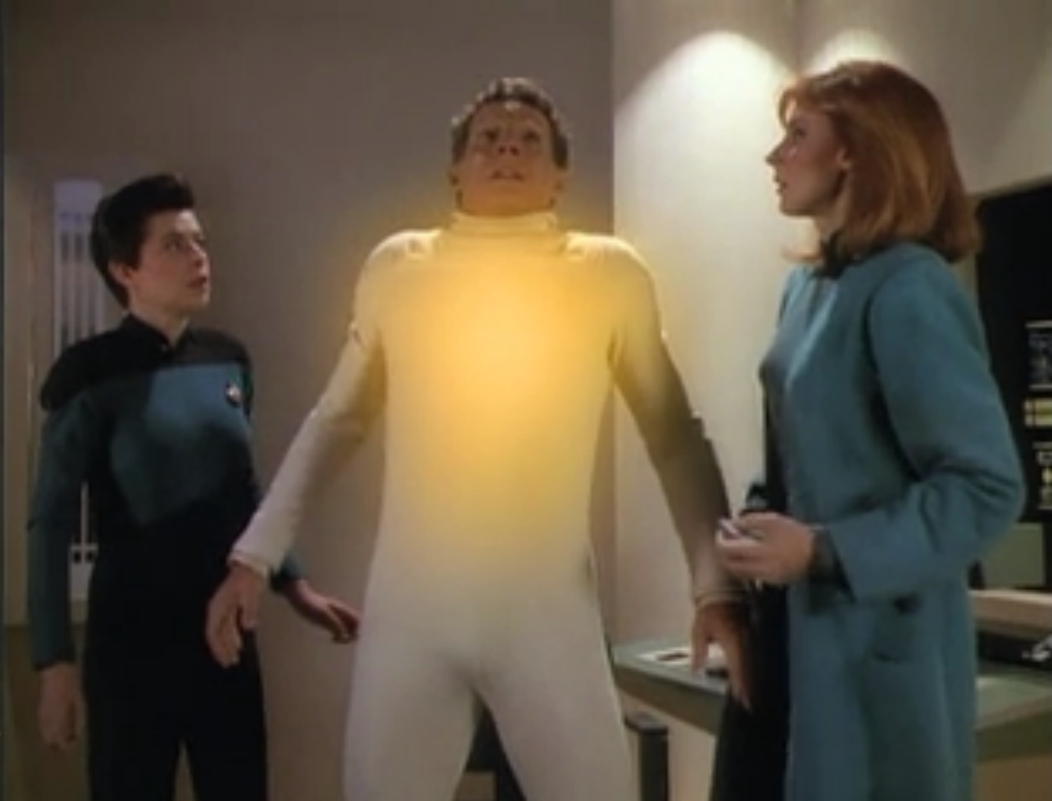 John gets increasingly agitated and glows gold; he's afraid that he will injure someone. He tries to steal a shuttle, injuring and maybe killing Worf in the process. John revives the Klingon and is sent to the Captain's office. Meanwhile an alien ship arrives, demands that the fugitive is turned over to them for execution as he's a dangerous influence. Picard doesn't want to interfere with a foreign legal system, but when he tries to get more information about John's crimes the alien captain decides the Enterprise has been corrupted. The alien Captain force chokes the entire crew. John saves Beverly then protects the ship with a forcefield. His memory returns and he confronts the alien captain. His people are evolving, but their society suppresses this, so he and his fellows tried to flee. With his memories come his powers and he turns into a shiny golden silhouette, saves the day and leaves. 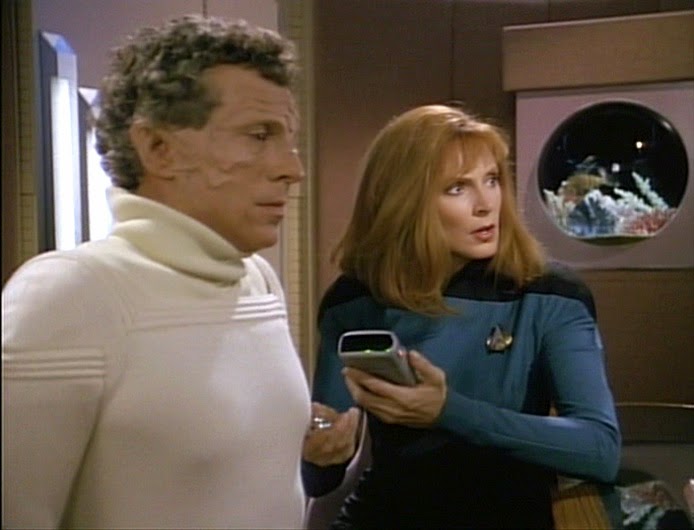 This is the first episode since The High Ground where Dr Crusher gets a major plot line. She's competent and compassionate as a doctor, has the respect of her staff who work together well. She's not going off on her own to solve problems as though she doesn't need her team (*cough*Geordi*cough*). There's a small moment when she's tired from working, has stepped to the side for a moment, and one of the med staff comes over and gives her a drink, which is the kind of thing I've yet to see in Engineering or on the Bridge. When John's biology proves mysterious she accepts it and does what's best for his recovery, as opposed to treating him like some fascinating specimen to satisfy her curiosity (*cough*Dr Bashir*cough*). When John acts out she very sensibly calls security, rather than protecting him over ship safety.
I like that John's recovery takes time, despite his regenerative abilities. If people stay there it makes sense for sickbay to be more welcoming than other parts of the ship. I also like that he goes through the future version of physiotherapy, with devices that gradually help him regain the ability to walk. They could have waved a magic tech-wand and had him all better straight away.
Beverley's dinner time conversation with Wesley was both good and odd.Wesley has picked up on his mother's feelings for John and talks to her about that in an open way. I think it's a bit strange that she tells her son why she finds John attractive, but maybe that's just me. It's cool that she acknowledges the doctor-patient nature of their relationship, and how that can affect both parties, she's such a professional. Her feelings for John are expressed subtly, nothing mawkish or hammy. John explains that the journey he's on must be his primary concern, he tells her where he stands maturely, without vocalising what's between them. He lets her know instead of letting her down. 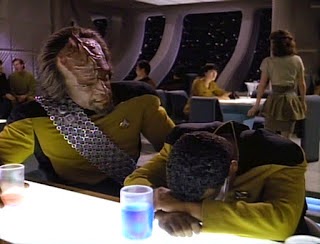 Geordi likes a girl (which is almost certainly how he thinks of her) but isn't sure what to do about that, because apparently he has the emotional maturity of an 11 year old. The idea that he might talk to her like a person never crosses his mind. I hate this damn trope so much! He talks to Worf about it (seriously Worf, seriously?), because Guinan's excellent point  from 19 episodes ago failed to register. When the object of his affection (as she may as well be known) makes conversation he answers in monosyllables. She's probably interested because she makes an effort to talk to him, even though it's an uphill struggle, and touches his arm. If this is what Geordi is like in social situations it's no wonder the main people he hangs out with are an android and a teenager. Seeing this I really don't think he was at all qualified to give Reg Barclay any advice on being shy or awkward. And then the solution is not for Geordi to grow up a bit and realise he shouldn't let his feelings stop him from functioning. No, he gets zapped by alien magic, and then he can talk to girls. Gah! The only saving grace is that hopefully we shouldn't have anymore plots with Geordi whining about his love life. 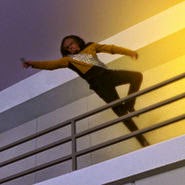 When Geordi talks to Worf about a woman, the Klingon tactfully advises him to let her see the fire in his eyes. He says this to a blind man who wears a visor! He is not picked up on this stunning lack of tact. Then he suggests that words are less important than smells, which he must know isn't the case with humans. Later when Geordi can suddenly speak to women (due to a magic alien zapping his brain) Worf claims he has been teaching him. Why does Worf think he can help? He's been raised among humans, but is scared of getting involved with human women. As far as we know he's had one relationship, which ended weirdly (twice). Plus he proposes to anyone he has sex with. But sure, teach people about dating, why not?
When Geordi and Data are in 10 Forward, technobabbling at length (about something they technobabbled about at least once already) Worf is visibly bored and agitated. Eventually he stops them because he wanted a relaxing drink, not dull, nonsensical chatter. For once, Worf, I am with you.

Poor O'Brien
O'Brien comes to sickbay because he's knackered his shoulder while kayaking in the holodeck. I didn't realise this part of his characterisation went back so far. He moans about it a bit more than he should when in the company of an amnesiac who's confined to sickbay. He is the first one to benefit from John's healing powers (assuming you don't count what he did to Geordi as healing, which I do not), so things are pretty OK for him this episode. 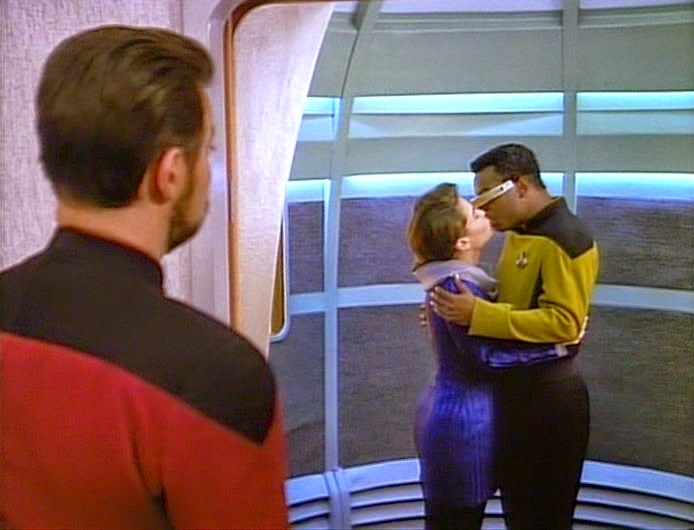 Random Crewmember
The object of Geordi's affection is called Kristy (is she the same Kristy who rejected him in Booby Trap? Does it matter?) She's also called Miss Henshawe, which along with her lack of Starfleet uniform suggests she has no rank and isn't a crewmember. So who is this woman and why is she there? Turns out it doesn't matter in the slightest. The important thing is that she makes out with Geordi in a lift.


No Magic Here
John is the evolved form of his people (like a friendly Magneto*), which must be pretty damn impressive as the unevolved form of his people can force-choke the entire Enterprise. His powers include regeneration, healing (possibly with resurrection), force blasts, warding (he shields the entire Enterprise from force-choking just by touching a random console), and turning into glowing energy (which is actually a pretty common trick in this universe). At the start Beverley biobabbles about something to do with his cells, but by the time he's become a glowy, golden silhouette it's pretty clear that he's magic.

Staff Meetings: 2
1. In sickbay Picard tells John they can take him home, but John insists he can't go back yet. His memories are fuzzy, but he knows he was escaping with companions who were killed by their pursuers. Picard is reluctant to change course, because the dull mapping is important for some reason. He tells John it won't be for another three weeks and clearly hopes their guest will be less crazy when they get there.
2. John is sent to the Captain's office for trying to steal a shuttle, Picard is disappointed in him. Crusher speaks on his behalf, but John senses that his golden, glowy episodes are dangerous. The meeting is interrupted by the arrival of an alien ship.

The End
John tells his enemy that the mutations will mean change for their society, but they shouldn't fear it. The captain still rejects the change, but John says its available to all their people and now he's magic they can't stop him from spreading his message. John  disappears the captain and says goodbye to Beverly before disappearing as a ball of energy. 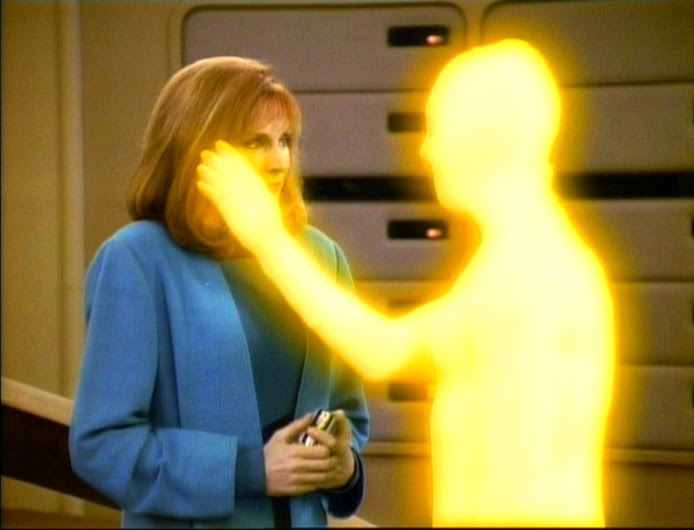 * Not really at all, but my husband is currently playing a Marvel computer game behind me, and he plays Magneto a lot and so there's a lot of Magneto's dialogue in the background at the moment.
Posted by Catherine Hill at 18:42