The Kingdom of Gods by N. K. Jemisin
This is the final book in the Inheritance trilogy, set about a century after the first. 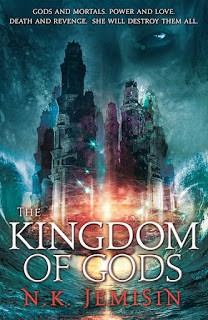 The narrator is Sieh, the trickster god of childhood who was a main character in The Hundred Thousand Kingdoms. He meets twins Shahar and Dekarta Arameri, descendants of his former captors, when they are just children. Sieh plays games with them, demonstrating both the playfulness of a child and the danger of a god with a grudge. The three forge an explosive bond of friendship and Sieh finds himself trapped in mortal form with little access to his magic. He is forced to grudgingly find a place for himself in the mortal world while his godly parents try to find a way to cure him.

I really enjoyed this book, it got into my head in quite a strong way. Now that I come to write this I find my recollections have gone a bit vague, but that is almost certainly due to the fact that I read it while I was ill and shouldn't be taken as a failing with the book itself. I remember being impressed at the expanded view of the universe, which had a lot more about the godsrealm and the unknowable Maelstrom. I also liked the way you could tell that society had moved on in the decades since the last book. The main thing I liked was the characterisation of Sieh. He was one of the most enjoyable characters in the first book, and being inside his head only made him more successful as a character.
The format is the same as the previous two books the choice of narrator is a significant change. The first two books were narrated by (mostly) human women, whereas Sieh male and the oldest godling (a god who isn't one of the Three creator-deities), even though he normally takes the form of a child. It is interesting to have a narrator who is a god and sees mortals and their world from a very different viewpoint. Sieh gives us the reader more information about the wider universe and the gods. Sieh is an interesting mix of holy and irreverent, behaving both a stroppy, mischievous child and a powerful god, even though he spends most of the book adapting to no longer really being either.
The central plot is about Sieh adapting to his unwelcome mortality, and his relationship with sister and brother, Shahar and Dekarta. There is also a mystery plot about a new type of magic and a rogue godling, but though that becomes incredibly important right at the end of the book I didn't feel it had as much impact as the more personal sections of the story. The relationships between Sieh and the twins are complex and interesting. His initial romance with Shahar is an impetuous, adolescent one. Though the feelings are genuine the situation is tinged with deceit as Shahar fulfills her role as her mother's pawn. Sieh's later relationship with Dekarta (the extraneous, misplaced spare to Shahar's heir) is more open, if sometimes a little obsessive.
There's a sense of grand scale that increases towards the end of the book. The Three (the first and most powerful gods) set aside their millennia-long quarrels to try their eldest child. An apocalyptic turn of events matches Sieh's own experience of mortality as he prematurely ages and faces the death.

I know I was on Book 2 of the Tales of Einarinn series, and I intend to finish it, but the waiting list at the library means that Book 3 is not available yet. On the other hand I got my boss to buy Chronicles of the Lescari Revolution (as there weren't any copies in the city), so this trilogy is right there on the shelf at work.

Irons in the Fire by Juliet E. McKenna 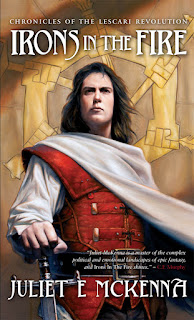 Lescar has seen centuries of civil war as generations of dukes use mercenaries and militias to fight among over the title of High King. While there is great distrust and even hatred among the six dukedoms, outsiders see only a mess to be ignored or exploited. Those who escape the country find there is little pride in being Lescari and can do little more than send money home to their beleagured families. Until a group of idealistic rebels, exiles, merchants and scholars join forces with skilled mercenaries and a powerful information broker to try and bring an end to the strife once and for all.

As someone with an interest in history this sort of story is very much up my street. Being set in a secondary world means there's no need to get bogged down in real world details (though I do like well-done primary world historical fantasies too), which are sure to be somehow controversial.* That said I know the author has a good grounding in history, and so the events in the story will be realistic and plausible within the early-modern-style setting, allowing me to happily get on with reading knowing I'm in good hands.
The cast of characters grows with the revolution, which starts as a hopeful, academic exercise and grows into a full conspiracy. The first set of characters, Tathrin and Aremil, are idealistic scholars, bound by the desire to do the best for their homeland. Then more worldly characters are brought in; rabble-rouser Reniack, information-broker Charoleia & mercenary brothers Sorgrad and Gren. These worldly characters change the plan to something more workable, though it requires greater sacrifices from all involved. We also see through the eyes of Litasse, a young Lescari Duchess, who knows only the privileged competitive viewpoint of the warring nobility. Failla, a young woman with a lot of secrets, is recruited to the cause, but only dreams of escaping. All the characters have their strengths and their flaws, be they physical or moral. There are a lot of people to keep track of but the plot never become muddled and the book doesn't feel crowded.
The conspiracy grows as merchants and mercenaries get into position, providing resources and manpower. Being a fantasy story magic has it's part to play, the tricky matter of communication over distances is solved by use of recently rediscovered Aetheric magic. This mental magic is not flashy, but it certainly is useful, allowing the conspirators to respond to changes as and when they happen.
This is very clearly a first novel. The players are introduced and the stage is set. There is plenty of action throughout, and the progress made means the pace never feels slow as the reader is kept abreast of all the important developments. The early stages of the revolution (not that it is yet called that) happen, but it is clear that there will be great difficulties ahead. I finished this book wanted to read more, and I'm glad that the next books are easily available to me.

* The more you learn about history the more you see how full of uncertainties it is. Also historians like a good argument, so there are few historical "facts" that some historian, somewhere won't argue with. If you don't believe me try googling the phantom time hypothesis.
Posted by Catherine Hill at 13:18