I was expecting this episode to be about the Klingons, or Worf (who hasn’t had much to do so far). Frankly I wish it had been, instead there's a possible discussion about what is 'civilised' that doesn't seem to draw any conclusions.


What Happens
The Enterprise makes diplomatic contact with a less-advanced, very human-like people in order to get an urgently needed vaccine. They meet with Lutan, who beams aboard with his retinue using their own transporters (so they’re not that unadvanced then). After being amazed by a female Security Chief and seeing a holodeck combat drill Lutan kidnaps Lt. Yar. 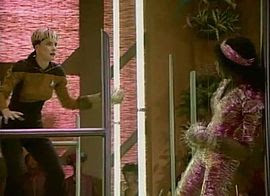 Picard has to tread carefully, despite the kidnapping, because they need good diplomatic relations in order to get the vaccine. At a very polite meeting Lutan announces his intention to make Tasha his ‘first one’. His current first one, Yareena, is not happy about this and challenges Tasha to single combat, to the death!
Tasha accepts the challenge (for some reason) and the Enterprise crew try to find a way out of the situation. As Tasha strikes the killing blow both women are beamed aboard the Enterprise where Dr Crusher saves Yareena. Lutan must concede that Yareena is no longer his first one, but because she isn’t dead her land can pass to the man of her choosing (his assistant who actually cared for her). Lutan is demoted and the Enterprise can leave with the life saving vaccine.

Picard likes old stuff
After mentioning that Lutan and his people are similar to an ancient Earth culture 'we all admire' (See Planet Of…) Picard gives him an antique Chinese horse statue. I don’t think these guys are based on the Chinese however.
Fringlish
Data refers to French as an obscure language, leading to an immediate, grumpy rebuke from Picard. He points out that for centuries the French language was a sign of civilisation on Earth. Of course he sounds more English than I do (for those who don’t know/haven’t met me, I’m from England). I’m not sure what the state of France is if the names (and pride) survive but the language is obscure.

The Boy
Beverly persuades Picard to let Wesley on the bridge. Picard not only gruffly agrees but tells Wesley to sit with Geordie, Geordie is not impressed, he’s not a babysitter. I guess Beverly has told Picard:
a) that Wesley associates him with his father’s death.
b) that Wesley has few/no friends among the other children.
c) both of the above.
Later Riker lets Wesley on the bridge without a thought. Riker is more comfortable with children than Picard and probably realises Wesley needs some positive reinforcement or something. When Picard returns he is annoyed to see Wesley manning a station, but Riker says he asked Wesley to help. Picard gruffly says Wesley can come back again.
If the kid wants to play at operating a star ship why don’t they run a holodeck programme for him? I can’t imagine that untrained children are supposed to push buttons that actually do stuff, surely there’s a regulation somewhere? I can't decide if he's getting special treatment because his mum is the Chief Medical Officer or because his family are/were friends with the Captain. Either way, I'm getting the horrible feeling that he's actually meant to be a main character.

Planet Of… Middle Eastern Stereotypes
The actors largely seem to be Black, but the influences in costume and custom are mostly Middle Eastern -though there may be some African stereotypes in the mix for good measure.
There are turbans, rituals, misogyny, formal customs, heavy eye makeup and a strong code of honour.
The kidnapping of a woman (by a lusty foreigner, no less) is a narrative convention that’s been at the heart of fictional East vs West relations since before Helen of Troy.
Lutan doesn’t actually say he wants her for his wife, but… well yeah, that.
Awkward Moment
Data tries to tell jokes to Geordie. Knowing what is coming, Geordie tries to escape but Data doesn’t let him.
Data has learned (and presumably told his victims) over 600 jokes.

The Prime Directive is a Harsh Mistress
Despite having greater technological and weapons capabilities the Prime Directive means Picard has to dance to the tune of kidnapper Lutan and the customs of his people. Otherwise the Enterprise could beam Lt. Yar out and an away team could seize the vaccine that will save millions of lives.

Staff Meetings: 2
1. Diplomatic meeting between Picard & Lutan and staff.
2. Picard & Dr Crusher discuss the desperate need for vaccine, and whether Wesley can have special treatment and go on the bridge.

The End
All ends reasonably happily, with Lutan put in his place and the vaccine secured. Lutan's former assistant (now the boss)points out that the Federation may have advanced tech but they are not as civilised. This seems like a very subjective point.
Posted by Catherine Hill at 16:30