One of the most interesting and tense Data-heavy episodes, in which Data meets a real adversary.

What Happens
Data is kidnapped and his death is faked in a shuttle explosion on the orders of a weird collector who wants to own Data. The Collector won't accept that Data isn't his property and Data refuses to accept he is a captive. The Enterprise mourns Data, but has to get the unstable cargo of rare stuff to a planet that needs it to decontaminate their water supply. Geordi is especially troubled by Data's death, and thinks that something suspicious has happened. At first Picard doesn't believe Geordi. 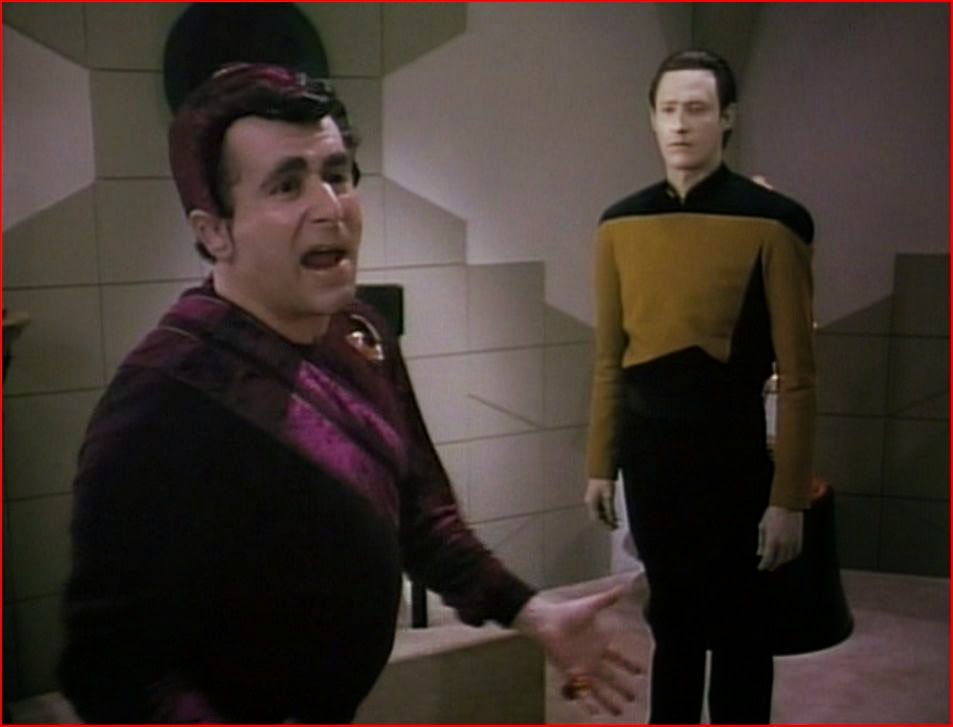 Data's escape attempts and demonstration of passive resistance cause his ruthless captor to threaten his ow ndeputy with slow, horrible death in order to make Data cooperate. The Enterprise crew discover that the poisoned water supply on the planet was artificial. They track this back to the trader who happened to have the right amount of the rare stuff to sell at the right time. He couldn't have made a profit as the rare stuff is really expensive. A look at his record reveals his passion for one of a kind objects and everyone realises Geordi was right and this guy probably has Data.
The collector's deputy, who previously refused to help Data, is angered and scard by his willingness to kill her and they try to escape together. They are caught in the attempt and the Collector does kill her. He and Data end up in a standoff, and the Collector goads Data to see if he really will kill him. Just as Data has to act he is beamed to the Enterprise. The Collector is apprehended and put in the brig. There is a question about whether Data was about to kill him.


Guest Star
The Collector is played by Saul Rubinek, who I recognised as Donny from Frasier. He's also Artie from Warehouse 13. Here he excellently plays a ruthless, vicious person. It's a great portrayal and unusual in TNG that's it's not a monster, there's no misunderstanding in the situation, or even antagonism from differing cultures/values/points of view. No this guy is very humanly selfish, ruthless and terrible. 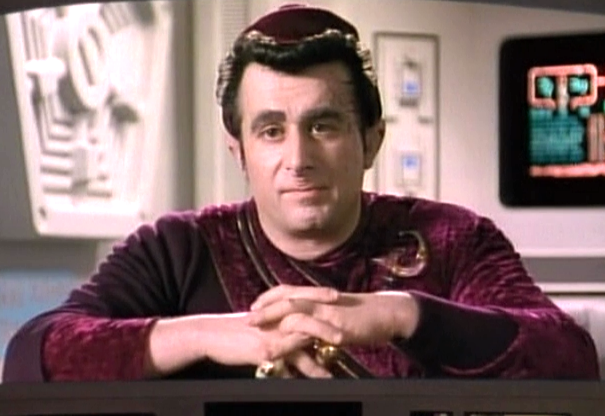 Oh Captain My Captain
Picard has to go on captaining despite the tragedy. He immediately contacts the Collector and tries to get as much info as he can about what happened. He listens to Geordi's concerns with patience, but essentially has to tell him to keep working as their mission is time-sensitive. Picard's sadness is shown briefly; the book of Shakespeare he gave the android is returned to him and he quotes some lines (if you hire an actor for their Shakespearean credentials you need to make use of them from time to time).
Riker recommends promoting Worf to replace Data, and Picard agrees. Picard calls him Data during his first shift, but quickly realises his mistake. It's going to be an adjustment for all of them, not least because Data was an android and therefore had abilities that Worf won't be able to match.

Does Not Compute
This episode explores Data, his programming and his development. These topics are regularly touched on, but here there's more depth and Data is put to the test in ways he hasn't been before. It seems that Data should be able to defeat a mere human, but here we see him pitted against someone more ruthless and calculating than we've seen on this show before (except for maybe the tar monster and the big scary face, but those were aliens and therefore it's expected they're monstrous). Data states that he was built for peace (which I assume is why he doesn't have eyes that shoot lasers) and has a deep respect for living things. He can kill when needed, but the question becomes when is it needed? This strength of his programming is exploited as a weakness by the Collector, who clearly takes perverse glee in testing the limits of his new toy.

Speaking of perversity, there's some super creepy, possibly sexual subtext here. I suspect wasn't intentional, especially given when this was written, but I read it into the Collector from the start. When Data first asks why he's there the Collector -elated by his new acquisition- slightly coyly says "You have been brought here for my enjoyment and my appreciation." It reminded me so much of Iron Man 3 when the villain, with an air of embarrassment, admits to Pepper that she's there to be his sex slave - it's horrible both because of his intention and the way it's presented. It's not an exact comparison because with the Collector it becomes clear that he feels no embarrassment or shame for his crimes, but that's what I thought of. Later, when Data refuses to wear the outfit the Collector has provided for him, the Collector manipulates him into wearing it by throwing acid on his Starfleet uniform and destroying it. "Personally, I'd be delighted to see you go around naked. I assume you have no modesty." He's so creepy! If you have trouble seeing how creepy this entire situation is imagine Data is coded as female. Horrible, isn't it? 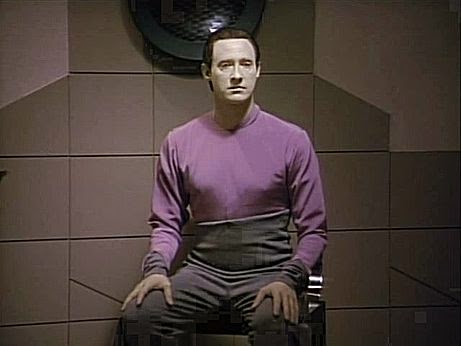 Data refuses to comply, but every time he angers his captor he is punished and manipulated. At first he politely and logically points out why the situation is wrong, which the Collector ignores. Data's captive has already set up tech to preserve his safety and compensate for the android's increased physical abilities. By destroying Data's uniform he forces him into a situation with two unpleasant choices. Data tries passive resistance and basically goes into statue mode, embarrassing the Collector in front of his guest. So the Collector, knowing about Data's respect for life, threatens to kill his own deputy in a slow painful manner unless Data does exactly as he's told. Seeing Data sitting in that chair like the display item his captor wants him to be is powerfully unsettling.
In the end the villain is of course undone by his own villainy and lack of consideration for his underlings, this is pretty typical and made me think of Syndrome from The Incredibles. Data is put in a position where he can kill his captor and escape, but only by using the slow, painful horror-phaser that the Collector used. The standoff is actually tense, with the collector goading Data to kill him, because he's positive he can't. He also taunts Data for his inability to feel anger about what's happened. As Data is transported to the Enterprise the horror-phaser fires. When Riker asks about it Data suggests it must have been triggered by the transporter. Do we believe him? Was he truly going to kill the Collector? If so, was it out of anger, or the only logical way to stop him? If the latter why lie? Can Data lie? The fact that these questions are there show the development of Data.

Blind Engineering
Geordi's grief is probably the strongest. He and Wesley go through Data's stuff, he owns about 7 personal affects. After a dream about the logs recorded before the accident Geordi starts listening to them obsessively. I don't know if this is supposed to be keen insight or simply the act of man in denial about the cause of his friend's death. Either way Geordi identifies that Data never reported leaving the Collector's ship. It's a small thing, something most people wouldn't bother to say because they'd know the Enterprise was tracking them, but it's unlike Data not to do things entirely by the book.


Staff Meetings: 2
1. Geordi explains to Picard and Riker that he's unable to find anything to explain the explosion besides pilot error, which he can't believe.
2. The away team report that the water contamination seemed to be artificial. Discussion leads to the conclusion that the Collector set the whole thing up to get Data.

Death By Space Misadventure
It seems as though Data dies in the shuttle explosion, transporting unstable cargo, and the only shocking thing is that it happened to Data. The Collector's deputy, Varria, is killed by him using a banner weapon that's like a phaser but ensures a slower, more painful death. 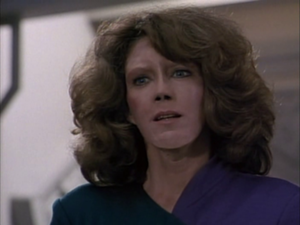 The End
Data visits his captor in the Enterprise brig, and the Collector says he will not repent or beg for mercy, and muses on their role reversal. Even now he is arrogant and seems confident he will return to having power over Data. The android informs him that his collection has been seized and is being returned to the rightful owners. The Collector suggests Data is getting pleasure from this. Data counters, as he often does, by pointing out that he cannot experience pleasure, he's only an android. This time I'm less certain than ever. 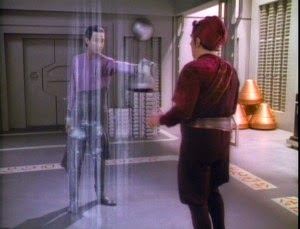