We have Netflix now.*

My husband and I watched Sense8 after we had both heard a fairly detailed (but not spoiler) assessment of it from a friend, so in many ways I think we went in prepared for it's strengths and flaws. It does meander, and there are some iffy plot and dialogue moments. Generally some of it is a bit odd, but you really care about the characters and that's the beauty of it. Overall it is actually kind of great, but I could understand if it is not for everyone.

The premise is an interesting one. Nothing about it that strikes me as completely novel or unusual but now that I think of it I'm not aware of much that's like this on TV before. I can think of examples in books, but even them the idea is used very differently, mental bonding across spaces using being to do with a destiny or magic or to add to a plot, rather than being about so completely and intimately about the characters themselves.

I suppose what makes it feel different is the scale of  the differences between the characters. I like the idea of people from diverse backgrounds and cultures not only being featured but treated mostly equally (as far as I could tell, I'm sure I have blind spots in this area) as characters within the story. This is a TV show with global characters and setting, and that's something that would have been harder to do in previous decades and I suspect would have been treated in a very different way. I can see other shows handling a similar concept by doing a lot of fish-out-water stuff with the non-Western characters and their countries; othering them rather than showing their lived experience in their own terms. It is refreshing to see people and places explored with little assumption of which are 'normal'. Admittedly half of the linked characters are white -two Americans and two Europeans- and there's only one of each other ethnicity in the cluster. That said as each main character has their own complete lives outside of the cluster there's plenty of diversity in the cast as a whole.

It's also good for portraying non-heterosexual characters and the premise explores gender fluidity. Of the three cluster-members in relationships two are in same-sex relationships, and those are also the only two that are are happy relationships. The sexuality of two more cluster-members hasn't been defined yet. The idea of fluid sexuality is explored in the infamous 'psychic orgy' scenes, which weren't quite as explicit as I thought they might be. The two cluster-members who are physically having sex are doing so with same sex partners, an the cluster-members who are only involved mentally two are straight guys who are experiencing this without any sign of disgust about the other men involved (though Will later gets weird at Lito for suggesting they had sex - but he's the token straight, white American guy, so I guess that's cultural or something). The premise has the potential to play with notions of gender too. Nomi is a transwoman, which informs but does not singly define her arc. Everyone else is cis, but they all experience the physicality of the others regardless of gender. So far this has been used in comedic or shock-value ways. Lito experiences many of the symptoms of menstruation/PMT (PMT is a Western cultural concept and not a globally recognised thing btw), which is played for laughs and is perhaps a little overdone. Though saying that there is a sort of joy in seeing a man dealing with it and having no idea what's happening. There's also an odd moment when Riley has a vivid recollection/flashback to being pregnant and Will gets a baby bump - that was sort of odd. Still there's potential for further exploration of how this could impact gender.

What struck me when I first heard the premise is that in many ways it's a TV show that's using a fairly light (though interesting and useful) SF concept to explore the increased connectivity between the global population. I'm not massively social online (or elsewhere if I'm honest), but on twitter I do follow people from all over the world and so I will glean bits of info here and there about their lives (and that's with the language barrier of me being mono-lingual). Those more digitally sociable and outgoing than myself can easily end up with friends, supporters and collaborators across the globe. When viewed this way the slower paced getting-to-know-you conversations that the characters have between the fights and chases are central.

While you are initially trying to figure out where a conversation is taking place (and possibly what time it is) you soon realise that it is foolish to assign such physical concepts to interactions to are largely mental. Just as a Skype conversation cannot be said to be happening in one place (unless you're being lazy and Skyping someone from across the room), so the interactions between the senseate** characters are happening in different places and yet they are together. There has never been more opportunity to find like-minded people than there is today and emotional distances can be very small despite vast geography. Being that we are still in a period of transition (one that I expect could take place across a generation or so) there are still plenty of people who will insist the friends and connections made online aren't real. There is still much focus on the idea of 'real life' being offline, but this is something that I think is changing, even as our existing social structures are still ill-equipped to deal with it. With this is mind Sense8 is very relevant. Most scripted TV shows will make concessions to the digital world, Sense8 is the main one I can think of that is exploring it. 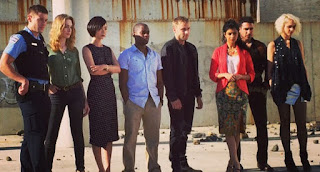 I'm assuming Capheus has not seen those Jean-Claude Van Damme Coors adverts. I hope he never sees them.

Is Kala's fiancé basically the nicest man in India? I think he might be. Breaking his heart would be like disappointing a particularly large-eyed puppy. I kind of feel like if she explained that she didn't love him he'd be pretty understanding, but then how terrible would Kala feel? She's a compassionate woman and can't handle this romcom situation.

Why would Nomi and Amanita hide in their own house for so long? Why wouldn't the people tracking Nomi not constantly watch their house? I know they figured no one would look for them there because its the last place people on the run would go, but there is a reason for that.

Poor Sun, all the men in her family are colossal jerks who do not deserve her.

I think I like Riley's dad more than her. I realise Riley's been through some crappy stuff and that probably influences the bad decisions she makes, but still I didn't warm to her so much. Also, is Riley an approved Icelandic name? It seems like they're pretty strict about that there.

That tough agent-guy's reaction when he thinks Amanita was on her period, so funny. He would not have acted that way if he thought she was bleeding from anywhere else. I swear some men are so phobic of menstrual blood and I don't even get why, it's not like it affects them. Admittedly I found the birth scenes a bit much, but that's a perfectly rational thing for me to be wary about.

Will is OK. In a less interesting show he'd be a really bland hero, he's mostly saved by the company he keeps. I'm not too bothered about him and Riley if I'm honest.

Wolfgang switches between me liking him and being uncertain about him. He's had a crappy upbringing too, but for some reason I feel better about some of his bad decisions than I do with Riley. Maybe it's because Wolfgang plans what he does, which considering the kind of things he does is probably worse from a moral standpoint.

The chemistry between Wolfgang and Kala is more interesting than Will and Riley, but I can't help feeling that he would be very bad for her in practice.

All the sex did not make make as uncomfortable as I thought it would. Not sure if it's because I kinda knew what to expect before watching or whether I'm growing as a person. Hopefully the latter.

I loved when they're all singing. So joyful!

*I must remember to cancel the Lovefilm subscription. Though Lovefilm (or Amazon thingamajig) is much better for films than Netflix but it's kinda crappy the way they handle TV series.