There are many parenting styles out there. Personally I'm all for acknowledging emotions and being playful sometimes, but not mud baths.

What Happens
Troi is providing family counselling to Worf and Alexander; she sugessts a contract to resolve their issues. After the session she gets a message that her mother has unexpectedly arrived. In 10 Forward Lwaxana tells Deanna that she's getting remarried and she wants to hold the wedding on the Enterprise. Deanna is surprised, especially when she hears that Lwaxana hasn't met her future husband (a royal from a planet she doesn't know). Lwaxana dismisses her daughter's concerns. Alexander and Worf approach the Trois, and talk about their problems again (Deanna is off-duty, surely). Lwaxana sees that dour Worf is not encouraging playfulness and forms a low opinion of him. She undermines Deanna by pointing out that a contract with a child isn't useful (because the power imbalance means the child has no way to sanction the parent) and decides to befriend Alexander. 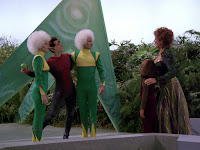 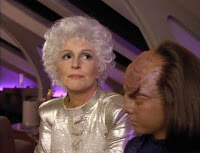 Alexander arrives early for a counselling session to get away from his father, and Lwaxana takes him to the holodeck instead. They enter a programme that looks like a weird kids' TV show, except there's fire and fighting and naked mud baths, so basically it's a parent's nightmare. Lwaxana says wise things about everyone having different parts of themselves and how we should take all the parts of ourselves with us for when we need them and celeberate our personal variety. It would be a profound moment except they're in a mud bath with a load of adults (albeit holodeck people) and everyone is apparently nude, and the entertainment is a naked dancing lady. Meanwhile Deanna goes looking for Alexander and finds Worf, who is angry that his son isn't where he's supposed to be. Asking the Computer reveals he's in the holodeck with Lwaxana. Worf and Deanna go and break up the party. Later Deanna scolds her mother for giving Alexander mixed messages, but Lwaxana brushes off her concerns. Lwaxana is also evasive about the wedding and Deanna is shocked to hear that her mother is going to wear a wedding gown, defying Betazoid nudity traditions. When Alexander visits Lwaxana to apologise for getting her in trouble she admits to him that age and loneliness are big factors in her decision to marry.
The groom arrives, a rather standoffish fellow with a stern protocol officer who dictates everything and is very unimpressed with Lwaxana and her entire manner of being. Alexander laughs during dinner, irritating Worf (poor kid), then after an angry exchange he runs off saying he promised to meet Mrs Troi. Lwaxana is bored at a meeting about her wedding, when Alexander arrives she's keen to escape, but soon-to-be-husband doesn't understand her keeping a promise to a child. Worf and Deanna arrive for Alexander. Lwaxana gets flustered and tries to placate everyone, but she and Alexander sneak off to the holodeck as eveyone else argues at cross-purposes. In the mud bath Alexander sees Lwaxana is sad and turns her earlier advice back on her, saying she should listen to the parts of herself that are trying to help. She realises he's being very wise and tells Alexander they should leave so they don't keep everyone waiting. 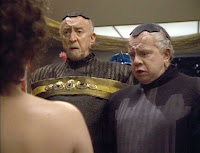 In the second plotline the Enterprise destroys an asteroid before it hits a planet, and some space glitter comes out of it. It glitters about the ship breaking stuff because it eats something that some of the systems are made of. The problem is discovered, discussed, Geordi and Data investigate, they  try to solve it, it's resolved before the ship is actually destroyed (mostly because Data doesn't need to breathe). No one seems to feel very strongly about these events and they have no impact on the A-plot.
Lwaxana is late her own wedding, then arrives naked, as is the custom of her people. The groom is very shocked, and doesn't know what to do with his face. The protocol officer is scandalised and pulls the groom out of the room. I guess it's all called off. Lwaxana enjoys the chaos -classic Lwaxana. 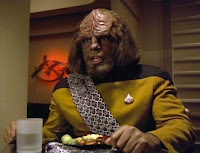 Worf is the opposite of a fun dad and you have to feel bad for Alexander who barely seems to be allowed to be a child at home. I don't know much about Klingon parenting, but then neither does Worf since he was raised by humans. I think the way he treats Alexander is an extension of Worf's identity crisis about how Klingon he is. He sets high standards of behaviour for himself and (rightly or wrongly) associates these with Klingon virtues/aspirations, then expects them of Alexander too. The fact that Alexander is one quarter human and has previously been raised in a human way doesn't seem to enter into Worf's thinking. I suspect Worf's authoritarianism is a cover for parenting uncertainty, if in doubt give orders in an increasingly stern manner. Acknowledging emotions, being playful sometimes, being willing to discuss things, and see things from a child's point of view all are useful parenting tools,* but Worf doesn't do this stuff. Additionally Klingons seem to have a strong tradition of representing your house/family and being "son of", so this probably adds to Worf's frustrations as Alexander's behaviour reflects on him. The fact that Alexander acts in an unrestrained way (as small children do) and doesn't really care about Klingon stuff probably hits proud, self-restrained Worf right where he lives. Of course all this is the kind of thing that they probably should be discussing in therapy, but I suspect Worf is unwilling to have these conversations.

Counsellor Pointless
Not used this heading for Deanna Troi in a while because I've come to really respect her counselling work (it's her empathetic abilities that seem a bit wonky, which may be why no one's mentioned those for a while, even here in an episode which stars her mother). That said, you see the paragraph above this one? That's clearly where her work is and she is not addressing it, but maybe that's because Worf won't? Of course Alexander (who wishes his mother hadn't died, and who has been shunted between his emotionally distant father and kindly-but-aging foster parents) has his own issues, but he's also having one-on-one sessions with Counsellor Troi. Is Worf? I think not. All Worf wants is a way to control his kid, and Deanna is trying to come up with practical solutions, but Lwaxana is quite right that a contract won't work. Alexander is only young (I don't know Klingon ages) and even if you put something in writing a young child isn't going to stick to it all the time, and the adult is always going to be in the position of power and the kid knows that. There's a reason minors can't enter into legal contracts.
When it comes to her mother Deanna has a difficult relatonship herself, which might explain why she's keen for Worf and Alexander to have stuff written down, did young Deanna yearn for a bit more stability? Lwaxana's feeling about her wedding are clearly mixed, but Deanna can do little to get her to open up, there's that parent-child power dynamic again. I don't think Lwaxana would really consider Deanna could help her, but family can freeze people into certain roles. I don't quite get why the arranged marriage thing is so surprising to Deanna. In series 1 Lwaxana showed up with a stranger that Deanna had apparently been betrothed to since childhood, so isn't this a Betazoid tradition? Also Deanna explained the late-life horniness Betazoid women go through and the weird shaming that necessitates husband-hunting in series 2, so you'd think this arrangement wouldn't seem so odd. I'm never sure how Betazoids and their culture are supposed to be, is Lwaxana seen as odd there too? Or is Deanna the odd one? What's clear is that nudity at a wedding is seen as natural and it is shocking to Deanna that Lwaxana would consider a wedding dress at all.


Won't Somebody Think of the Children 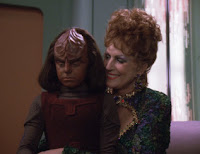 Actually they do, that's the whole point of this episode. It's good that Alexander has so many adults looking out for him in different ways, even though they all have very different approaches. That said, I still feel like it is too easy for a child to wander wherever on the ship without their parent knowing. Or is the whole ship supposed to be a shared residence and so it's like you're in your own house the whole time? I guess the fact that the Commputer can tell you where your kid is whenever you think to ask is good, but there seem to be few other controls.
Lwaxana's intentions towards Alexander are very good and she says some wise stuff, but you DO NOT take someone's kid without their permission! Definitely not without their knowledge! Worf barely knows Lwaxana, Alexander's met her once before, and yet he follows her to a holosuite. Do they not have stranger danger here? I mean, it's supposed to be a utopian society, so I guess they don't, but it seems iffy.
Speaking of iffy, the naked mud baths and dancing lady aren't age appropriate. Nudity taboos are a thing to me, and I get that they aren't to Lwaxana, dunno where Worf stands on that but as sole parent his wishes are important. I get that the utopian viewpoint says that bodies are fine, that shame about bodies is a thing of the past, people should be comfortable with themselves and others, inhibitions are prudish and nudity doesn't have to sexual, plus presumably every space is comfortably climate-controlled. Of course all that (especially the not-sexual part) would be easier to take if they hadn't put bodypaint on a lady and had her prance about in front of yet more naked people while a naked small child watched. That just feels suuuuper uncomfortable.

The End
Lwaxana enjoys a mudbath, more content than she's been all episode and tells Alexander how wonderfully mutual it is that she wanted to teach him about grabbing joy and he taught her not to let it go. Deanna points out that learning to live in the real world is important, and Lwaxana agrees that this is true, but only when neccessary. Worf, tense and grumpy as ever, grumbles about just sitting there. Haha, silly Worf. A light hearted ending to a light hearted episode in which some personal issues are resolved. 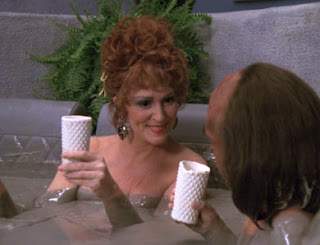 * I'm just naming chapters from a parenting book I read last year, but it was a good book.
Posted by Catherine Hill at 17:24