What Happens
A scout leader is found in the woods by his troop, his body levitating. The team investigate, and Simmons realises his brain was zapped by something more than lightning. An electro-static signal is traced to a nearby barn, where a farmer's corpse is levitating. Skye discovers that both victims were volunteer firefighters who went to New York to help clear up after the Chitauri invasion. The men seem to be targeted, so they tell the other firefighters. One reveals that they took a Chitauri helmet from NY and the three of them cleaned it. Turns out the helmet is spreading an alien virus by static shock. A firefighter knows he's next and Coulson comforts him in his last moments by talking about his own death. While in the air they realise Simmons got shocked by the first victim and is infected. She has to figure out a cure or the pulse she'll release on death will take out the entire plane. Fitz and Simmons realise they can use the cells from the helmet to make an anti-serum. Ignoring his own safety Fitz enters the lab and together they try to find a solution. Nothing works, Simmons' symptoms intensify and time is running out. It looks hopeless so she opens the ramp of the plane, just as Fitz realises the last serum works with a delay. He prepares to follow her, but Ward takes the parachute and anti-serum off Fitz. He reaches Simmons and injects her before they both land in the sea. Coulson's Alive!
Coulson has Simmons do a physical on him, pretending it's been advised as part of his recovery, actually he's curious about his own health. Talking with the dying firefighter Coulson reveals that he knows he was dead, actually dead, for more than the 8 seconds he been told. He tells the fireman he went somewhere beautiful. Is this like a Joss Whedon theme or something? On the way to the Sandbox Coulson is ordered to ditch any infected cargo, meaning Simmons and the helmet. Coulson pretends he can't hear the order. Even though it risks them all he won't give up on Simmons while there's hope. When they're safe Coulson yells at Simmons and Ward for what they did, he's angry and relieved. At the Sandbox Coulson is told off for disobeying orders and his defiance is apparently uncharacteristic and Coulson agrees he's changed.

The Cavalry
Coulson admits to May that he knows he's physically fine, but he doesn't feel the same anymore. May has him unbutton his shirt and look athis scar. She points out he went through a trauma and isn't the same anymore, but he can only go forward.

Meh,Ward
Ward tells Skye that he'd prefer if they were facing a person, someone he can punish. He laments being unable to protect people. It's interesting that he reacts this way, wanting to be able to take action. He's better at jumping out of aeroplanes than Fitz would be, and manages to save Simmons in mid air. Ward reveals to Simmons that he knows they've been teasing him and joins in on the joke, an unusual moment of levity.

Science Hermione and Monkey Boy
This is the episode where Fitz and Simmons really come into their own as individuals. Examining the body infects Simmons, though they don't realise until the plane's in the air over the Atlantic. Quarantined in the lab, desperately trying to prevent her own death, Fitz stays with her the whole time as both try to deal with what's happening. They both put on a brave face, they try to joke and they argue. It's beautifully written and performed and pretty sad. I really love that Simmons refers to the Chitiari warrior who owned the helmet as 'she'. When they realise the Chitauri cells might provide a cure Fitz breaks protocol to get the helmet and goes into the quarantined area to help Simmons. They seem to have 3 white rats to test the anti-serum on, where did they come from? Are there usually rats on the plane? Poor squeak rat, two of them die in the testing. When it looks like all hope is lost Simmons requests Coulson break the news to her father, rather than her mother, it's heartbreaking. To save everyone from the EMP that will accompany her death Simmons nocks Fitz out with a fire extinguisher then jumps out of the plane. Fitz is absolutely willing to jump out of the plane to save Simmons, even though his chances of success would be low.

Hacker Girl
Skye is in Ward's doghouse still, though Fitz and Simmons have forgiven her Ward is cold and dismissive of her. Skye feels trapped by her monitoring bracelet and is really trying to do as she's told and get back in everyone's good books. Ward and Skye reconnect over their feelings of helplessness about Simmons.

Weirdness of the Week
Alien virus that is spread by electrical shock. An aftermath of the Battle of New York even after so long.

Villain of the Week
As Ward points out there's no villain, just an alien virus doing what it does. 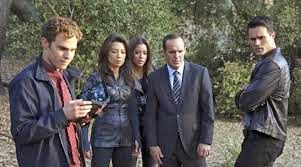 SHIELD LOL
Simmons gives Coulson a physical and comments that he's in great shape for a man of his age. He replies with "That's something you say to an old person." "Is it?" *awkward grin*

Throughout the episode Fitz, Simmons and Skye do impressions of Ward, especially after Ward complains about the weight of the night-night gun. Their American accents are terrible, though probably not as bad as mine would be. At the end of the episode Ward reveals that he knows they've been mocking him and shares the joke by impersonating their impressions of him.

In the interrogation room May grimly offers a scared scout a cookie, it's kinda hilarious.

When a body is brought into the lab Fitz hides from it and refers to the incident with Simmons and the cat. He likes a tidy lab free of cat liver. The exchange ends with "It's science Fitz! I have to dissect something." 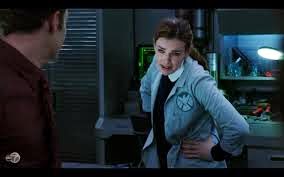 When Ward talks about his anger at not having someone to punish I definitely believe him. Not quite as convinced by his distress at being unable to protect them, what with his being evil and all. Saving Simmons from death in/over the sea has an interesting symmetry with his later murderousness.

May's concern over Coulson's condition is that of an old friend, but as she knows more about his death than him and has instructions to monitor him this behaviour is practical too. I'd forgotten just how cold and uncommunicative May is at the start, but they don't develop her so much early on.