Episode: s1, ep14
A genderswap planet with a bit of thought put into it,* a plot that's no more nonsensical than those that surround it, and Riker wears a hilarious outfit.


What Happens
The Enterprise goes to Angel One in search of survivors from the Odin, a Federation freighter wrecked seven years earlier. Angel One is similar to mid-20th Century Earth (of course it is), however the females of the species are bigger, more aggressive (and more deadly?) than the males. Some contact has already been made with this planet and due to unspecified strategic value, relations must remain excellent. An away team meets with the leaders of the planet, who are evasive and unwelcoming. The away team discover that the 4 survivors from the Odin are fugitives. Riker dons a hilarious outfit and meets with the leader, Beata; they end up sleeping together. The rest of the away team meet lead survivor Ramsey, who refuses to leave his new home, his family or his fight for equal gender rights. 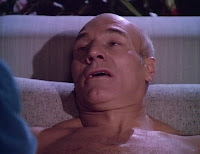 Meanwhile on the ship, Wesley and an East Asian kid play in holodeck snow then catch a virus (which sounds a lot like the flu). It quickly spreads through the ship, mutating regularly and filling sickbay past capacity. Picard catches it and Crusher sends him to quarters, leaving Geordi to enjoy his moment in the big chair.
The away team find Riker and Beata après l’amour. The whole fugitive movement is caught because one of the council members is secretly Ramsey’s wife and she's followed to their hiding place. Beata sentences the rebels to death, unless Star Fleet removes them. Riker argues against execution, and wants to take everyone away, but can’t because the Enterprise is a plague ship with hardly any functioning crew left. Data is sent back because he won’t get sick. Before the execution Riker makes a speech about change and revolution, and Beata downgrades the sentence to transportation. The entire rebel movement will be sent to an inhospitable, distant landscape where surviving will distract them from troublemaking (they’d better learn Waltzing Matilda).
Crusher realises the virus is spread by smell and this means she can make an inoculation just in time.

Also, there’s something about a load of Romulan ships massing in the neutral zone which means the Enterprise should leave asap. We never actually see any of this, it’s just mentioned in dialogue, so the viewer is not encouraged to give a damn.

He’s invited to meet with Beata, who sends him the traditional one-nipple-on-display garb of Angel Oneian men. It’s obvious where this is going, and Riker’s outfit means it’s suitably hilarious. Beata’s a bit of a chauvinist towards her own males, but Riker doesn’t seem to mind. Riker is hairy, tall and decisive (and the only organic male on the away team). She is apparently seduced by his manliness, since few/none of the males on her world have these qualities (if these are things she’s looking for then surely the women on her world could provide, but for some reason this possibility isn’t mentioned). The seduction is uncomfortable and weird, but this is what I expected.
Riker and Beata have sex for fun, there is no suggestion of love or a relationship and neither changes their minds or values as a result. Riker quickly argues against her use of execution and Beata doesn't change her mind about men or her principles about their place in her society. She’s against the rebels’ talk of gender equality, and even after she accepts Riker’s argument that change it is a-coming, she acts only to minimise that change.
Counsellor Pointless
Troi senses some deception from the Mistresses, and concern, but it is conflicted so she can’t tell what it’s about. Riker senses paranoia, despite just being only human and not magic.

Does Not Compute
Data is sent back to the Enterprise the evening before the execution because he can't get sick (despite the events of The Naked Now). Also he has to take the Enterprise away to deal with something about Romulans and the Neutral Zone that's apparently very urgent, or whatever. Data doesn't leave and the next morning he figures out that Riker has 48 minutes to solve everything and get back on the Enterprise. Apparently Data couldn't give Riker this info earlier, which is a bit unfair - Flash Gordon got 14 hours warning and a declaration of love.

Planet Of… Gender switch
I have ambiguous feelings about this planet.
The Good 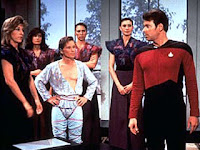 The concept is done with proper worldbuilding. The men of Angel One are naturally smaller and weaker than the women, which means that a reversal of Earth-like gender politics makes sense. I was impressed with the casting, which ensured fairly tall actresses and short actors. I especially liked Trent (played by Leonard John Crofoot) who is the only named servant/functionary. He’s physically short and is shown doing effeminate things (like using perfume), but he plays this naturally so it doesn’t come across as totally camp. He’s also capable and works efficiently, calmly and quietly in the background of the episode (much like a 1920s maid).
There’s the sense of a realistic society with conflicting viewpoints. Beata is a traditionalist, but isn’t shown to be a manhater (an improvement on fictional matriarchal societies that have only one idea, man=bad). She feels that men are naturally less capable and is rather patronising about them.** Ariel on the other hand has joined her alien husband’s movement and works secretly -but apparently not very stealthily- for the cause of gender equality. She is shown in a supportive role, which is probably odd for a woman on her world.

The Bad
And yet there are niggles. The Mistresses (yes, that is their title) who run the planet are all pretty and under a certain age. Addressing gender roles is good, but heaven forbid we have to see any ordinary-looking women or ones over 45. Hell, Ramsey even makes it clear that this is the deal when he says that he and the other survivors liked the planet at first because the women are all “tall and strong and lovely”.
The women in this episode are basically men, but with dresses and shiny hair and lady parts. It’s not in any way a depiction of a society run by the fairer sex, it’s just swapped which gender is the fairer sex.
Picard’s infodump log states that it’s “an unusual matriarchal society where the female is as aggressively dominant as the male gender was on Earth hundreds of years ago.” The fact that matriarchies are unusual is disheartening, it’s such a novelty that Troi feels compelled to eagerly point out that her planet has female leaders too. Also I’m going to be charitable and believe Picard’s statement that domination of one gender is no longer an issue on Earth.

The Prime Directive is a Harsh Mistress
I could make some bad Mistress puns here, but I shall refrain.
Riker explains that it’s fine for Star Fleet to make contact with pre-warp worlds, but they aren’t allowed to interfere in their domestic affairs. This is apparently very seductive talk.
The Prime Directive doesn’t stop Star Fleet from hoping that Angel One could eventually join the Federation, showing that they’re definitely not above grooming juvenile civilisations. Picard mentions something about the planet’s strategic position, so it’s not as though their oh-so-important values are the only factors at play here.
It turns out that the Prime Directive only applies to Star Fleet personnel. Federation citizens who aren’t the crew of starships (but still travel about the galaxy) don’t have to take a blind bit of notice and Star Fleet can’t do a thing about it. If it’s a loophole it seems careless, if it’s an ideological choice it doesn’t seem like the Federation.

Security Breach
So, still no quarantine procedures then? Despite the events of The Naked Now. I realise Crusher doesn’t know how it’s being spread (except that it isn’t person-to-person) but surely that’s all the more reason to lock down areas of the ship.

Staff Meetings: 1
The away team check if their room is secure then discuss the situation on Angel One, especially the lack of welcome.

The End
Picard returns to the bridge though he hasn’t fully recovered. Riker says they have to go to the neutral zone to deal with the Romulans, that we never see and don’t really care about. Picard tries to say ‘engage’ but his voice has gone, it’s pretty funny. Riker grins and says it instead.

* When this episode began I feared it'd be like the Women of Lemnos section from Jason and the Argonauts (or that Amazonian episode of Futurama). Or that it was going to be another matriarchal society that would confirm various stereotypes about women and eventually some man-haters would be taught the error of their ways (possibly due to falling in love, or penises, or something). Luckily we get something more thoughtful than I feared, though it's far from perfect.

** Something feels a bit familiar here, what can it be?
Posted by Catherine Hill at 09:36